With its “Marvelous Metals” theme, this year’s National Chemistry Week (NCW) helped amplify the celebration of the International Year of the Periodic Table.

The nationwide outreach event took place Oct. 20–26 across the US and Puerto Rico. Nearly 90% of the American Chemical Society’s 185 local sections hosted hands-on activities and demonstrations at shopping malls, libraries, museums, and other public venues to communicate the value of chemistry in everyday life.

“NCW activities are a way to engage kids and get them to see that chemistry and science can be fun,” says Holly Davis, chair of the ACS Committee on Community Activities, which organizes NCW with the help of the ACS Office of Science Outreach.

“Since its inception, NCW has been an important, exciting, and fun way for chemists to connect and collaborate with others in their communities,” ACS president Bonnie Charpentier says. “NCW programs educate and generate enthusiasm for science with people-to-people interactions at a local level.”

This year, more than 175,000 copies of the NCW publication Celebrating Chemistry were distributed. More than 19,000 people visited the revamped NCW website, and the #NCW hashtag reached more than 35 million people.

The NCW community service event focused on recycling metals, with many local sections organizing recycling drives and tours of local recycling centers. In addition, students in grades K–12 were invited to participate in the 2019 NCW Illustrated Poem Contest (see the box on page 59 for the winners).

“Our volunteers are amazing ambassadors for chemistry,” Charpentier says. “Their dedication and hard work are invaluable and make NCW possible. I would like to thank them from my heart and have them know that their efforts have a great effect in connecting with their communities to inform and inspire.”

The following, alphabetized by local section, are highlights from this year’s celebration, collected through reports from ACS local sections.

The Central Ohio Valley Section held a Chemistry of Pickling event at the Heritage Farm Museum and Village in Huntington, West Virginia. Visitors learned about the different types of pickling, viewed bacteria under a microscope, and tested the pH of various household solutions.

The Central Wisconsin Section had students from the University of Wisconsin–Stevens Point lead hands-on activities at a local Boys and Girls Club.

The East Tennessee Section participated in a number of activities, including Al Hazari’s 29th annual Magic of Chemistry show at the University of Tennessee, Knoxville; hands-on activities at the Tennessee STEAM Festival; a Program-in-a-Box event at Pellissippi State Community College; and Forensic Science Night at Rocky Hill Elementary School.

The Erie Local Section hosted a chemistry demonstration event at Millcreek Mall. The event featured eight interactive demonstrations for children, and the stations were staffed primarily by student volunteers from local universities.

In the Indiana-Kentucky Border Section, six high school chemistry students participated in the chemistry bowl competition at the University of Southern Indiana. Afterward, the students toured the chemistry labs with student affiliates at USI and were treated to a chemistry demonstration.

Credit: Elena Meadows
In the Kalamazoo Section, a student learns about density during hands-on activities at the Kalamazoo Valley Museum.

The Kentucky Lake Section put on an NCW demonstration show at the University of Tennessee at Martin. Student volunteers from four local universities led the demonstrations.

The La Crosse–Winona Local Section hosted its 2nd Annual Pumpkin Drop and STEM Carnival, which was attended by more than 500 people from the community. Volunteers also held hands-on activities at the Children’s Museum of La Crosse.

The Maryland Section organized activities at public libraries around Baltimore. Participants learned about metals through activities such as redox reactions in copper-zinc batteries.

The Midland Section hosted a Haunted Mine activity in which participants used black lights to locate different coins, avoiding slime and other surprises along the way.

More than 130 students participated in Mole Day at the University of Nebraska–Lincoln as part of the Nebraska Section’s NCW celebration. This new annual event highlighted careers in chemistry. Activities included a raffle for an ACS mole, two quizzes, and giveaways.

Members of the New York Local Section unveiled their giant 3-D periodic table to commemorate the International Year of the Periodic Table at the New York Hall of Science. Thousands of volunteers representing 56 organizations contributed element designs. Volunteers also hosted hands-on activities for more than 1,200 visitors to the Hall of Science.

The North Jersey Section hosted ChemExpo, a 1-day event at Liberty Science Center. Volunteers from local colleges, universities, companies, and organizations interacted with more than 200 children, who learned about the various properties of metals.

The Northeast Wisconsin Section hosted activities for about 30 children at the Boys and Girls Club of Oshkosh as well as at the Oshkosh Public Library. In addition, more than 50 people attended a Program-in-a-Box event at Marian University.

In the Northern New York Section, Dana Barry of Clarkson University conducted a workshop with students at St. Mary’s Catholic School in Canton, New York. She spoke about a variety of metals, including gold, silver, iron, and aluminum. Students participated in a design competition to build the best aluminum boat to carry pennies composed of zinc and copper. The local section also hosted a Program-in-a-Box event at SUNY Plattsburgh. Finally, the section hosted outreach activities for more than 300 students during Chemtoberfest.

The Pittsburgh Section partnered with the Carnegie Science Center to host ChemFest, a 2-day celebration of chemistry. Volunteers from local companies, government organizations, and academic institutions hosted activities for more than 2,200 local students and their teachers.

The Portland Section coordinated with the Oregon Museum of Science and Industry’s Chemistry Lab staff to provide hands-on activities to visitors of the museum.

The Puerto Rico Section held its annual Festival de Química at the Paseo de la Princesa in Old San Juan. More than 800 volunteers from 21 student chapters around Puerto Rico engaged in hands-on activities with more than 2,000 people from the general public, setting a record number of volunteers for the local section.

In the Sacramento Section, volunteers from local high schools and colleges hosted metal-themed activities at the Powerhouse Science Center.

The Saint Joseph Valley Local Section partnered with the E3 Robotics Center on STEM Fest 2019. Representatives from several metal companies talked about the metals they use in their products.

In the Salt Lake Section, members of the Westminster College Chemistry Club joined forces with the Westminster College Geology Club, the college’s Pre-Professional Health Club, the Cyprus High School ACS Chem Club, and the Great Salt Lake Institute to show the versatility of metals. The geology club organized a scavenger hunt in which participants looked at various rocks and minerals and learned how metals give them their characteristic colors. Volunteers from the Great Salt Lake Institute informed visitors about the magnetic properties of iron in meteorites.

The San Joaquin Valley Section organized Mad Scientist Tours for students from local high schools. These consisted of visits to commercial labs in the greater Fresno, California, area so students could see what it’s like to work as a chemist.

The Southern Nevada Local Section hosted activities at the Discovery Children’s Museum in Las Vegas. College students and local section members interacted with more than 200 kids and adults over the 7-hour event. At least 90 kids completed all five activities and earned a goody bag to take home.

The Texas A&M Local Section hosted a Chemistry Open House for more than 1,200 people, who were treated to demonstrations and lab tours at Texas A&M University in College Station.

During the Western Michigan Local Section’s celebration of NCW, volunteers displayed what is possibly the world’s largest periodic table. Forty schools from 12 states and 3 countries designed elements for the project.

The Wisconsin Local Section took to the lobby of the Capitol Ice Arena, with student volunteers doing chemistry demonstrations before a Madison Capitols hockey game and during the two intermission periods. In addition, nearly 40 ACS members and prospective members interacted in a special suite overlooking the rink.

Next year’s NCW celebration will take place Oct. 18–24. It will focus on glues and adhesives with the theme “Sticking with Chemistry.”

The ACS Committee on Community Activities and the ACS Office of Science Outreach have announced the winners of the 2019 National Chemistry Week Illustrated Poem Contest, in which K–12 students were invited to share their interpretation of this year’s theme, “Marvelous Metals,” in the form of illustrated poems. First-place winners in each grade category received $300. Second-place winners received $150. View all poems at www.acs.org/ncw. 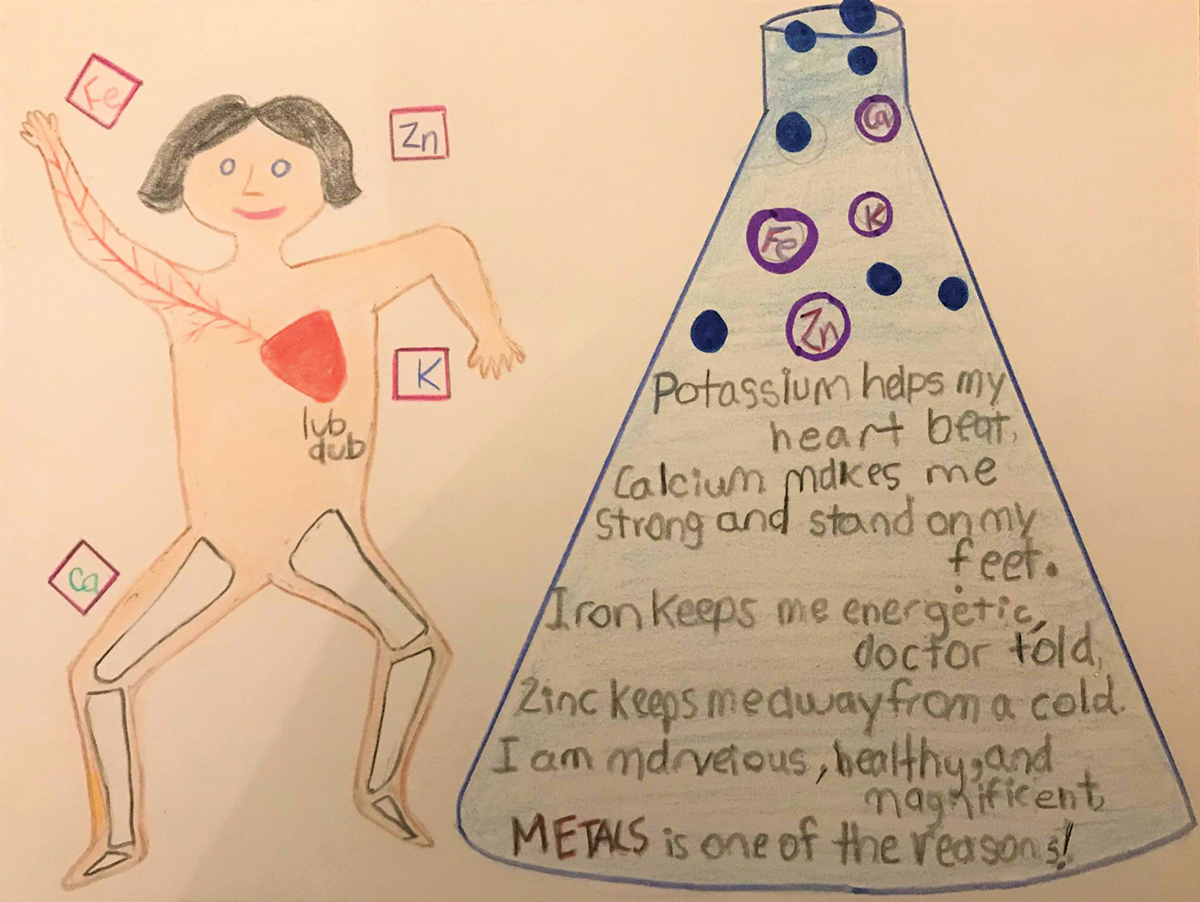 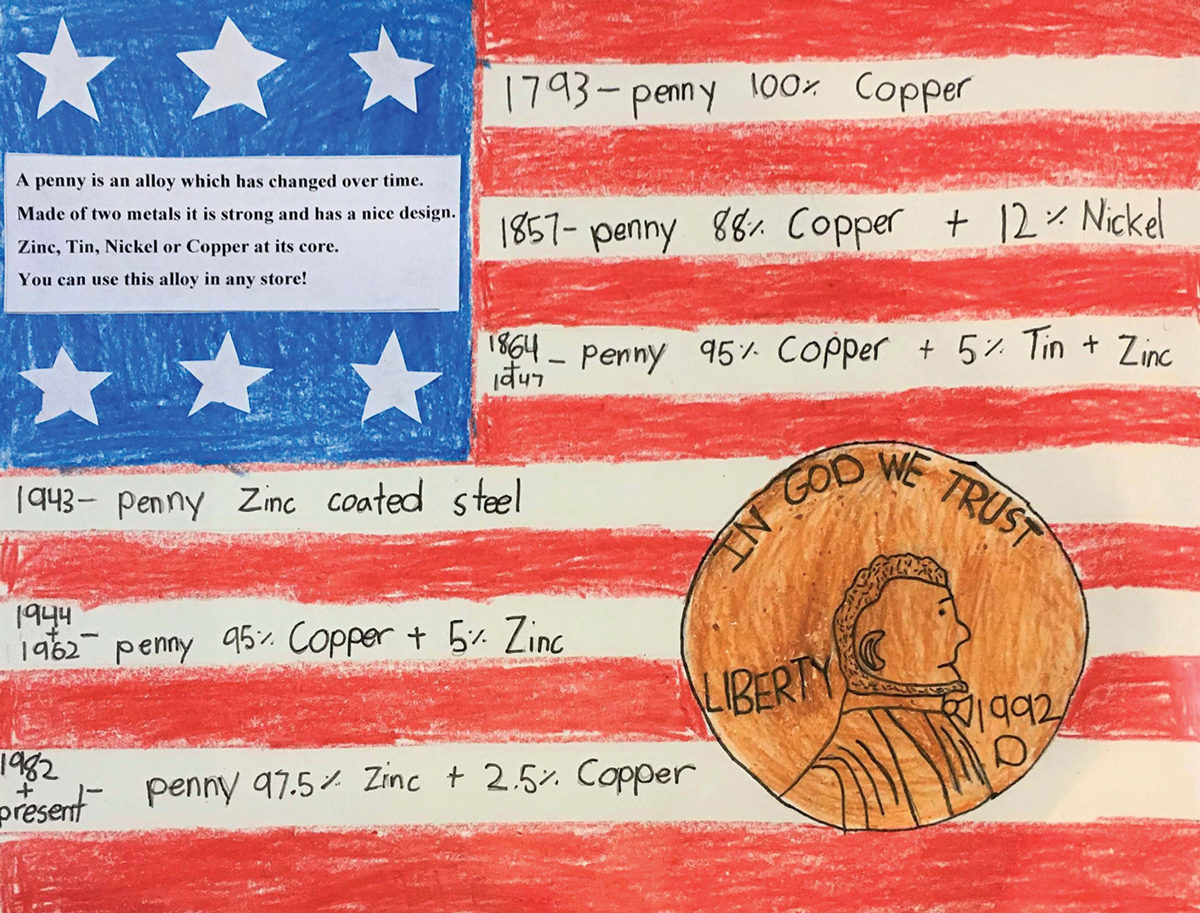 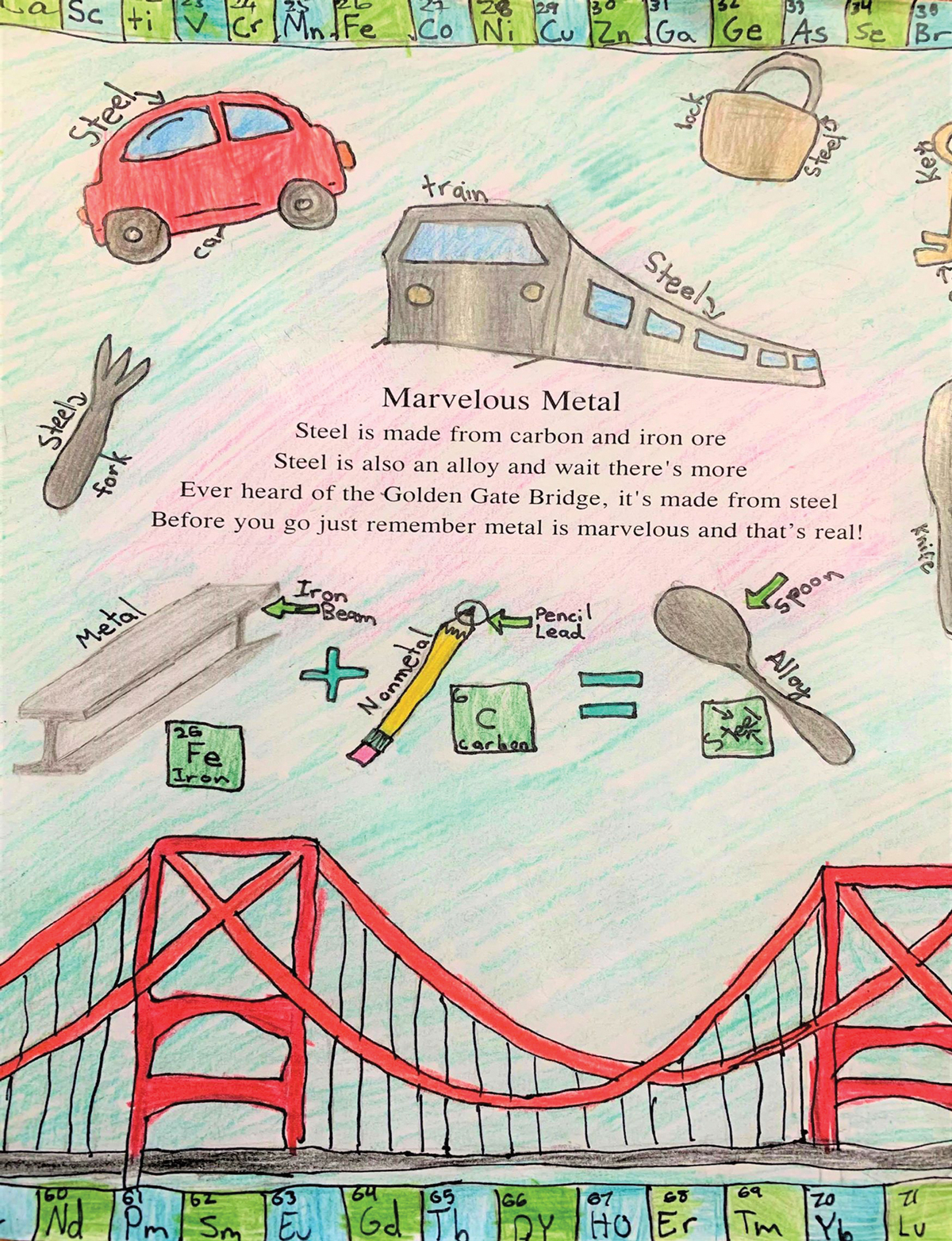 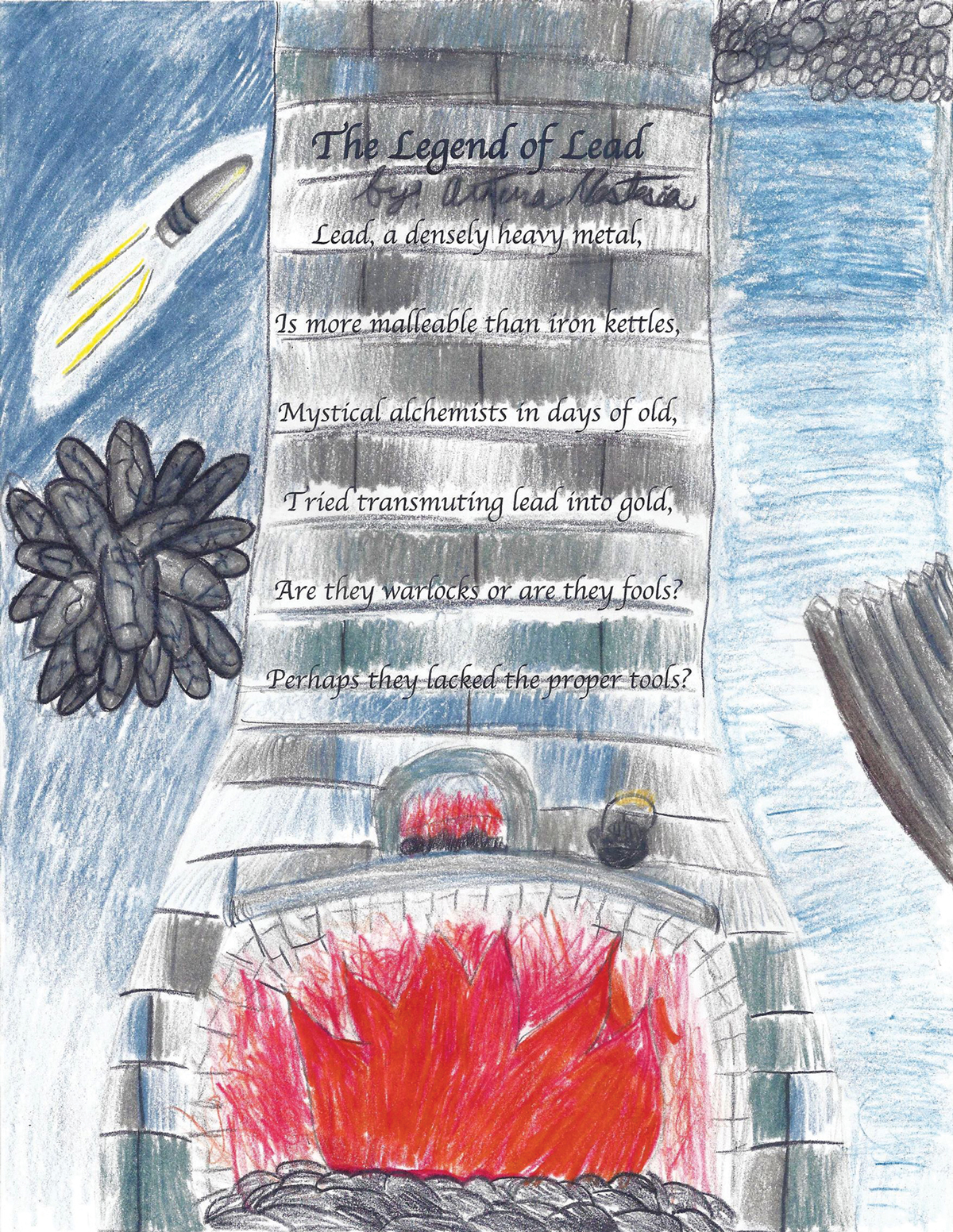 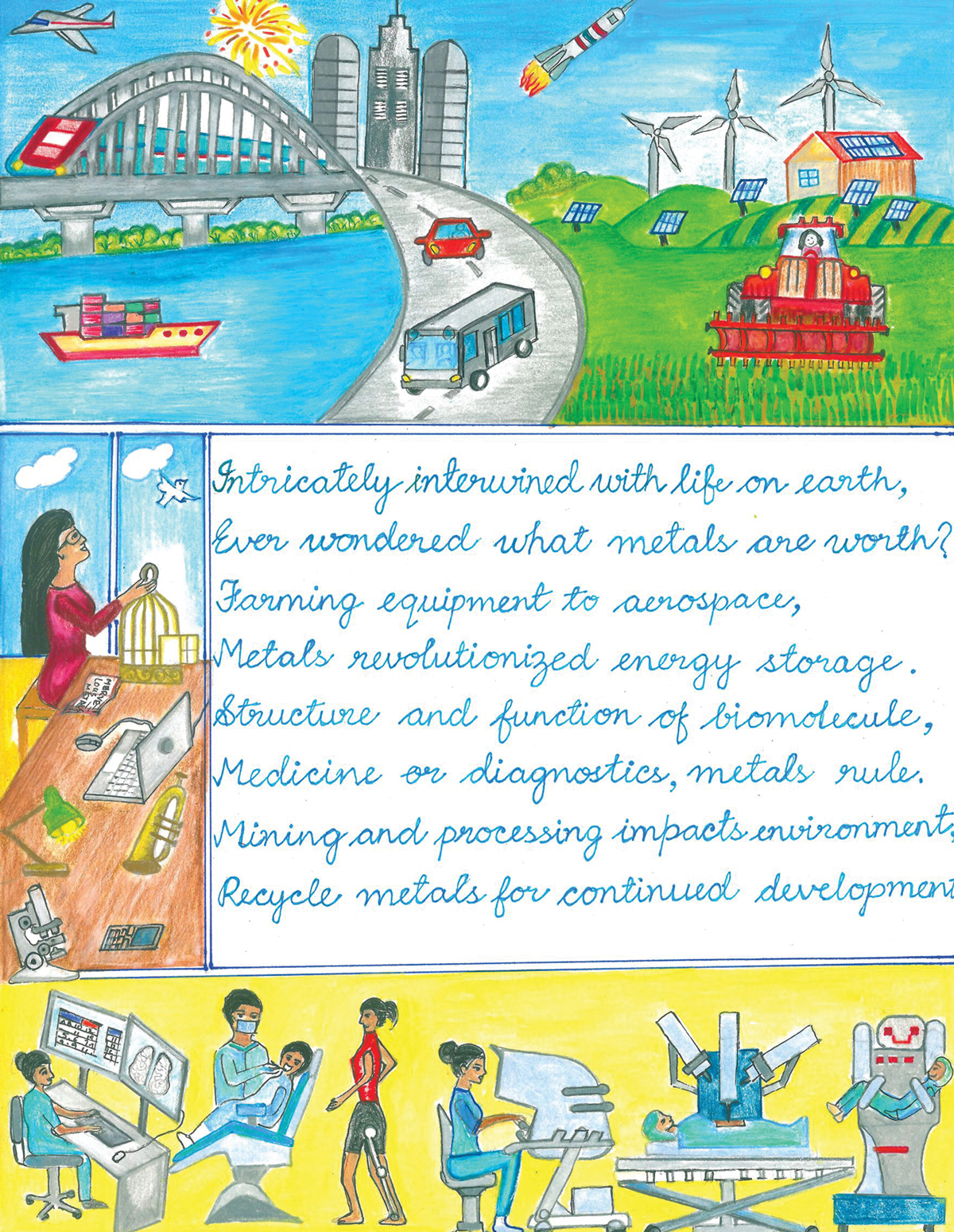 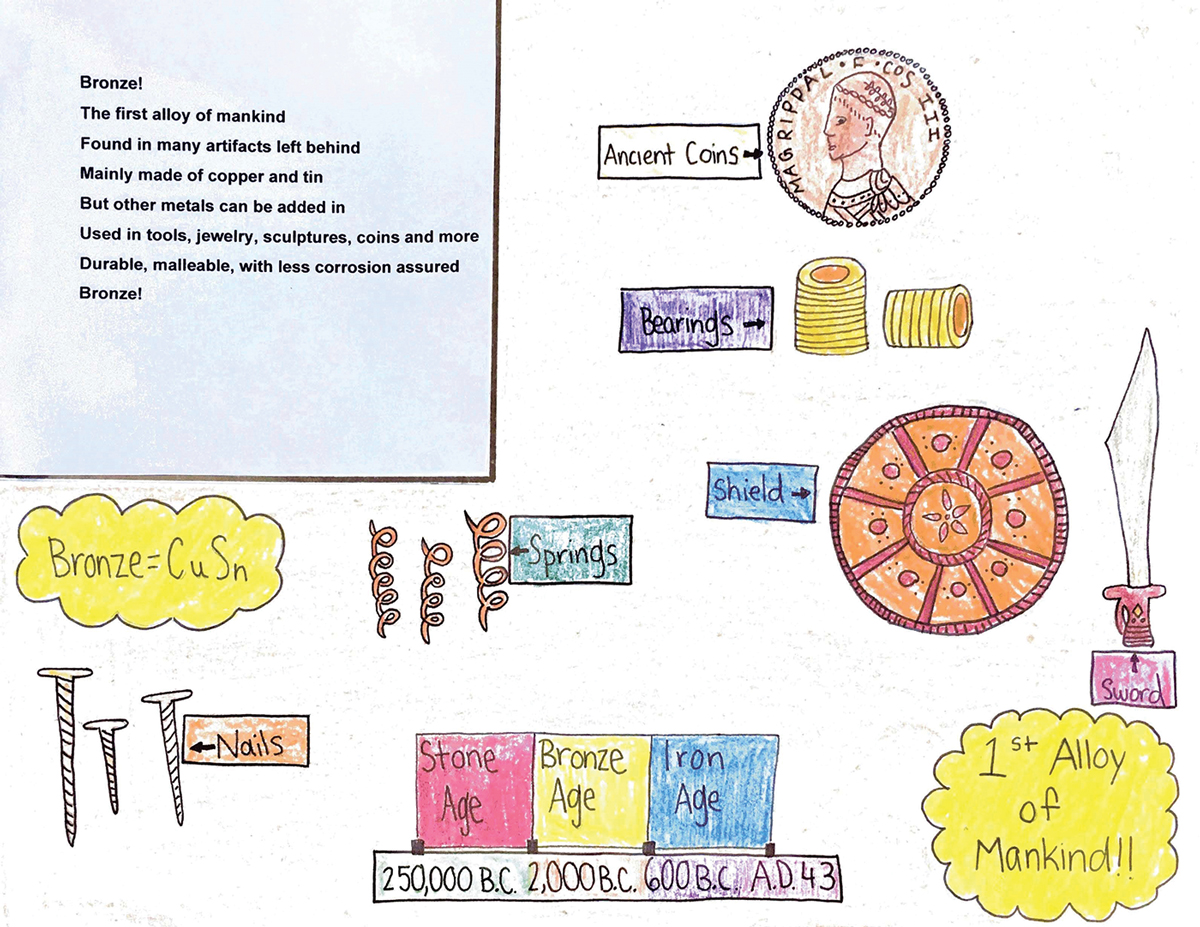 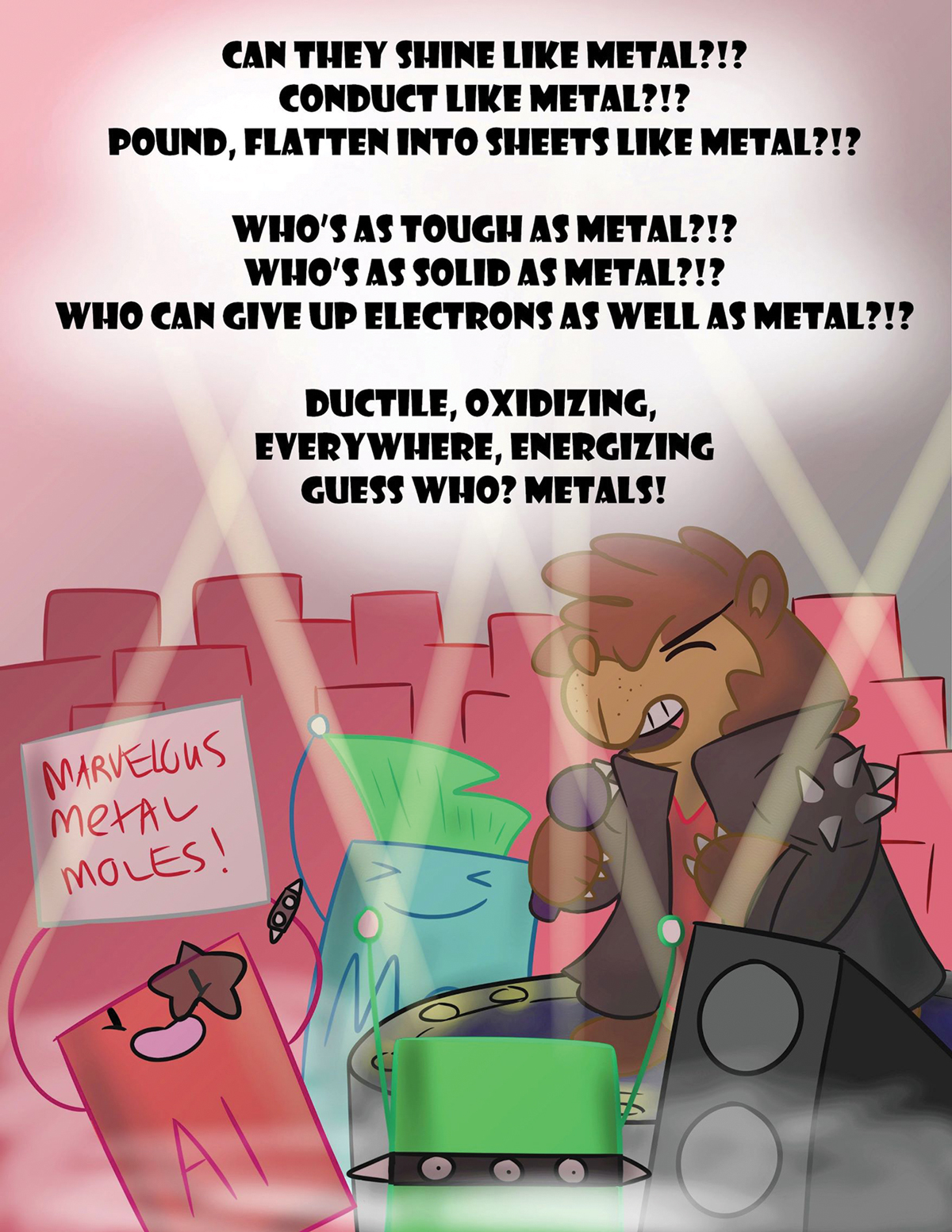 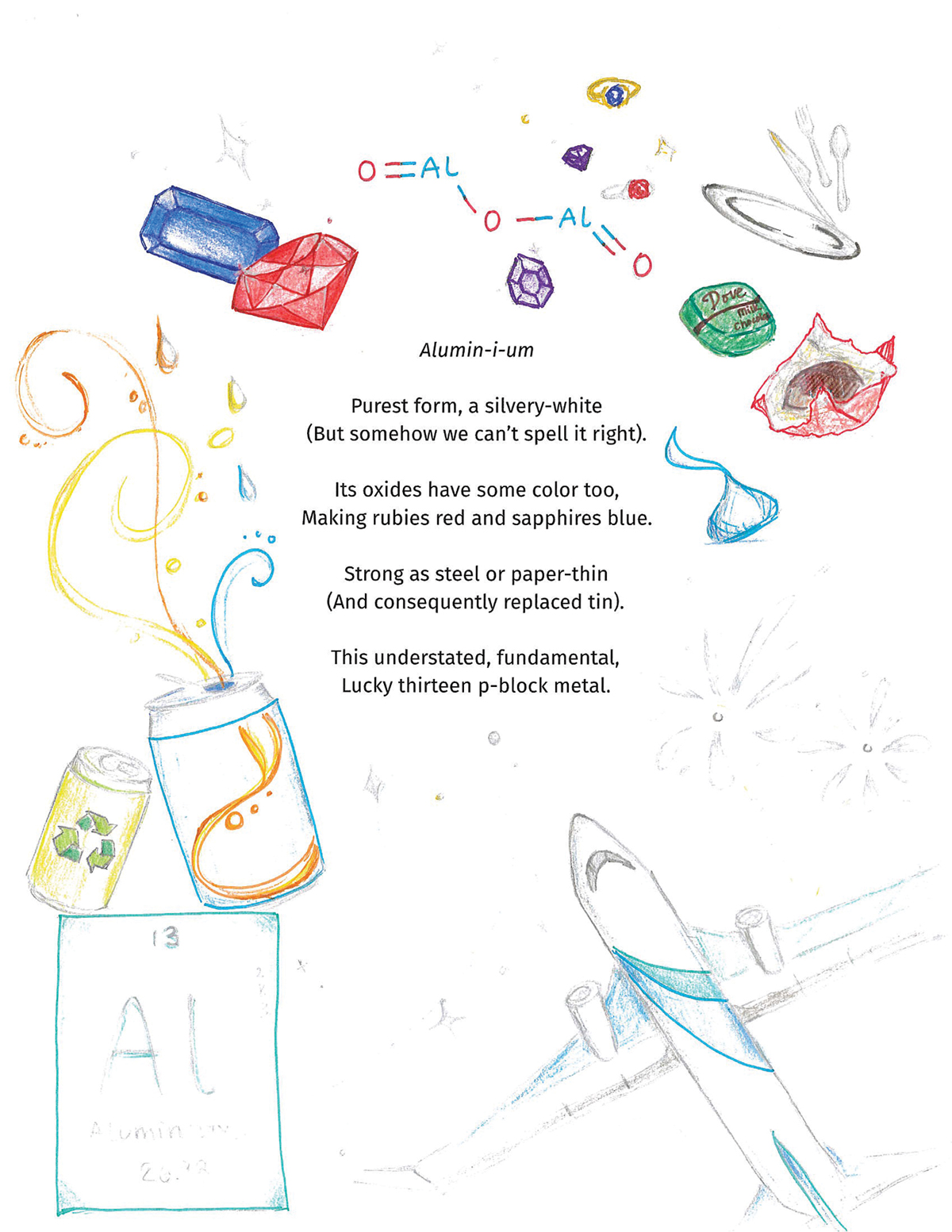 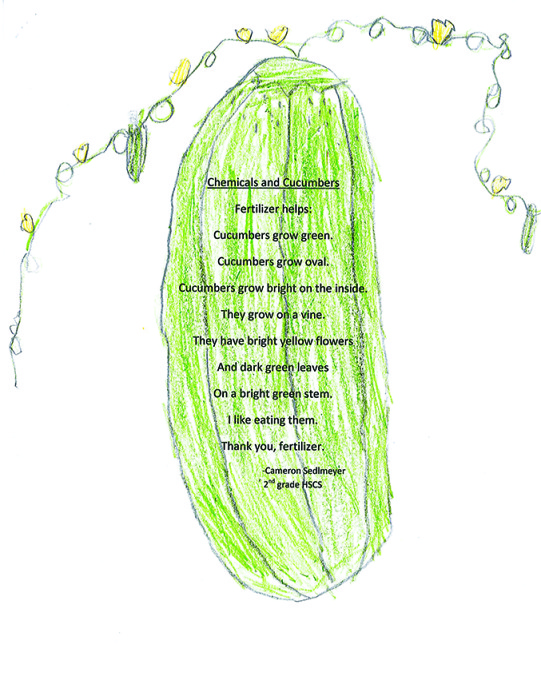 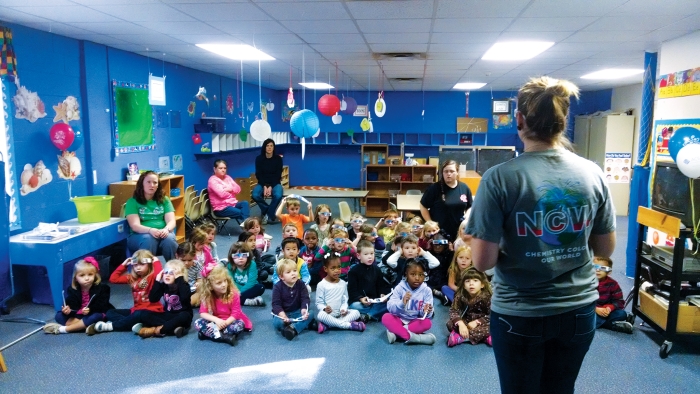 Education
Candy-Coated Chemistry
Share X
To send an e-mail to multiple recipients, separate e-mail addresses with a comma, semicolon, or both.
Title: Highlights from National Chemistry Week 2019
Author: Linda Wang
Chemical & Engineering News will not share your email address with any other person or company.