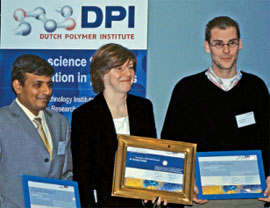 Early this month, the Dutch Polymer Institute (DPI) held its ninth annual meeting to bring its stakeholders-delegates from the chemical and downstream industries, academic and institute researchers, and government officials-up to date on the latest advances in polymer research.

Nearly 220 delegates attended, including many Ph.D. students and postdocs from the Netherlands. For them, it was a testament to the excitement they are finding in a sector that many industry observers want to write off as "boring."

As DPI said in its invitations to potential delegates, the annual meeting "is meant to present topics from different areas of polymer science and technology that are of upcoming interest within DPI." Under the theme "Bringing Science to Industry," the meeting was hosted by Degussa and its research subsidiary Creavis in Marl, Germany.

It was, noted DPI Managing Director Jacques G. H. Joosten, the first time that the institute has ventured beyond Dutch borders for its annual meeting. In part, this reflects the increasingly international nature of DPI itself, which was established to meld the research efforts and funding of industry, academia, and government in the Netherlands.

When DPI became fully functional in 1998, it had nine company members. That number is now more than 35, working on projects in close partnership with university and research institute colleagues.

In fact, the success has been somewhat embarrassing, DPI officials say. The original plan was for industry and academia to chip in 50% of a project's funding, with the Dutch government funding the other 50%. Faced with escalating demands, however, the government has recently capped its total funding for the projects, although it continues to support DPI.

"Science to Business" is the central aim of Degussa's corporate research, pointed out Michael Drscher, director of corporate innovation management at the company. He welcomed delegates by describing Degussa's approach to R&D, which includes project houses used to develop technology platforms, science-to-business centers, and incubator units.

"I don't see new polymers" emerging from current research, he said. Instead, "I see modified, functional systems where people take existing polymers and give new properties to them." Such new properties, he suggested, could include hardness, self-cleaning, scratch resistance, and the like. 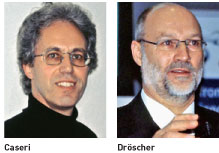 Drscher also pointed to the burgeoning importance of polymer raw materials that are derived from renewable resources, such as DuPont's 1,3-propanediol and Cargill's lactic acid. Moreover, he observed, biotechnological pathways and natural resources become feasible as oil prices rise and remain high.

One of the parallel lecture sessions focused on polymer-metal research and on the development of properties in polymers normally associated with metals, such as magnetism and conductivity.

Walter R. Caseri, professor in the department of materials at the Swiss Federal Institute of Technology, Zurich, tackled the optical and electrical properties of polymers into which small metallic entities have been introduced. His work focuses on the conductive properties of oriented metal atoms in a polymer backbone. Such concepts are not new, he said, citing the early work with Magnus' Green Salt, formulated in 1828. When first formulated, the platinum-based salt was green, rather than the expected pink, and was found to be semiconductive. The platinum formed a channel for charge transport, Caseri noted, but there was one serious drawback: the material was not processible, being largely insoluble and nonmelting.

His team's goal, he said, was to develop comparable materials that would feature an increase in solubility. His team used a number of alkyl compounds, including dimethyloctylamine and ethylhexylamine, in reactions with platinum chloride and bromide.

The result, he said, was electrical conductivity comparable with that of Magnus' Green Salts. This time around, however, the materials are processible.

And he sees equal promise in his team's newest work with polystannones, based on pure linear stannones. The strong metal-metal bonds in these compounds, he said, would enhance the performance of semiconductors.

Magnetic elastomers are the subject of research being conducted by Miklós Zrinyi at the laboratory of soft matters in the department of physical chemistry at Budapest University of Technology & Economics.

According to Zrinyi, the latest generation of magnetic elastomers represents a new type of composite, consisting of mainly nanosized magnetic particles dispersed in a highly elastic polymeric matrix. Such combinations, he said, display novel and often enhanced properties, as the magnetic particles couple the shape of the elastomer to the external magnetic fields.

All of the forces acting on the particles are transmitted directly to the polymer chains, he explained, inducing either movement or deformation; shape distortion occurs immediately and disappears just as abruptly when external fields are applied or removed.

The stability of polymers used in field-effect transistors was addressed in this year's fourth annual Golden Thesis Award. The DPI award went to Cristina Tanase, now a research scientist in Philips Research's photonic materials and devices unit. It recognizes work she completed with DPI sponsorship at the Netherlands' University of Groningen on unified charge transport in disordered organic field-effect transistors and light-emitting diodes (LEDs).

This field of study is particularly competitive now, as researchers aim at one of the most promising areas of electronics: all-polymer, thin-film transistors that directly challenge the inorganic materials now used in transistors. Such transistors could be useful in fabricating thin flexible displays and smart labels.

Tanase sought to study the relation of a polymer's chemical structure, synthesis, and processing to the performance of a device, such as an LED or transistor, that contains it.

Differences in device requirements, she said, have historically meant that different types of polymers were used for polymer LEDs and for thin-film polymer transistors. LEDs have tended to feature polyphenylene vinylene (PPV) derivatives, whereas transistors have used poly(3-hexyl thiophene) and polythienylene vinylene.

However, development of the latest generation of PPV derivatives, she said, means that the performance of this polymer family is now comparable with the properties of the best existing thin-film transistor polymers. That's important, Tanase said, because PPV is more stable in air than the traditional materials used in such transistors.