With supercomputers, first exact model of a molecular breakup is achieved

Zap!
[+]Enlarge
Credit: Image by W. Vanroose et al. And S. Lemmens
A single photon (yellow) causes H2 to break up into its constituent electrons (blue) and protons (red). Vanroose, Martín, Rescigno, and McCurdy have obtained an exact computational model for this process. 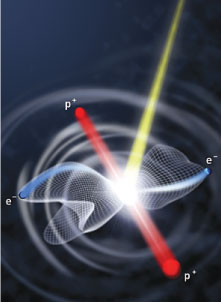 Credit: Image by W. Vanroose et al. And S. Lemmens
A single photon (yellow) causes H2 to break up into its constituent electrons (blue) and protons (red). Vanroose, Martín, Rescigno, and McCurdy have obtained an exact computational model for this process.

Decades after the Schrödinger equation was formulated, researchers have solved it for the light-induced breakup of a molecule. The solution provides a model that makes it possible to study the electronic and nuclear interactions occurring as the molecule is torn apart. The achievement could lead to a better understanding of chemical bonding, especially if it can be generalized to more complex molecules.

The work was inspired by an earlier study by University of Frankfurt professor of nuclear physics Reinhard Dörner, his student Thorsten Weber, and coworkers that demonstrated an experimental approach for completely fragmenting a diatomic molecule such as D2 with a single photon (Nature 2004, 431, 437). That study showed that the paths taken by the ejected electrons depend sensitively on the distance between the two nuclei at the instant the photon is absorbed. But the mechanism of the intriguing dependence could not be studied further by experimental means.

To unravel the mechanism, Vanroose, Martín, Rescigno, and McCurdy employed supercomputers at three sites with hopes that a theoretical approach would yield an answer. What they have achieved is the first exact numerical solution of the Schrödinger equation for the double photoionization of a molecule. The reaction is the complete disintegration of H2, in which two electrons are expelled when a photon is absorbed and the protons then fly off as well by a process called Coulomb explosion.

Dörner comments that the study is "a major achievement in many respects. Finally, almost 80 years after formulation of the Schrödinger equation and 100 years after Einstein's explanation of the photoelectric effect, this group has obtained a numeric solution for a seemingly simple problem: How does a single photon break the simplest molecule into its pieces? This opens a completely new observation window on the correlated motion of electrons within a chemical bond. It's a major theoretical breakthrough that is really at the edge of current computational possibilities."