When a company's lead drug candidate sails through the regulatory approval process in record time, the focus tends to be on how many more patients will be helped or how much money the drug will make. Little attention is paid to the elbow grease that went into getting the product on pharmacy shelves early.

Partner Power
[+]Enlarge
Credit: ash stevens photo
ASI was able to get a robust manufacturing process in place at its Detroit plant in time for the launch of Velcade. 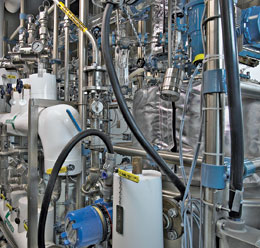 Credit: ash stevens photo
ASI was able to get a robust manufacturing process in place at its Detroit plant in time for the launch of Velcade.

That kind of behind-the-scenes dash can be a burden, albeit a happy one. In 2002, Millennium Pharmaceuticals discovered that its cancer drug Velcade was so effective in Phase II trials that regulatory authorities were willing to let the drug onto the market before Phase III trials were completed-a year ahead of the company's launch projections.

The new deadline meant Millennium had to reset its timelines for preparing a regulatory filing and a market launch. With the clock ticking, Millennium turned to Detroit-based contract manufacturer Ash Stevens Inc. (ASI) to help get the manufacturing piece of the puzzle in order.

According to Mark Rolfe, Millennium's vice president of oncology discovery, Velcade was invented by MyoGenics, a start-up firm founded by a handful of scientists from Harvard University who set out to explore the potential of boronic acid dipeptides as proteasome inhibitors. The drug represented an entirely new way to combat cancer, attacking from several angles: inducing cell death, inhibiting the cell cycle, and overcoming cell-survival pathways.

ASI became involved with Velcade's active ingredient, bortezomib, at this early stage. It made the first small batches of the drug when ProScript, as MyoGenics eventually came to be called, was preparing for a Phase I clinical trial that was initiated in October 1998.

ProScript was acquired by Leukosite in July 1999, and despite encouraging results in that Phase I trial, the project lost momentum in the transition. Development eventually got back on track after Millennium acquired Leukosite in December 1999. ASI was brought along as the active-ingredient supplier.

The following year, Millennium initiated a Phase II trial in patients with multiple myeloma, a kind of blood cancer, with the original intention of enrolling about 70 patients. As that patient pool grew to 200, it became clear that the company had found a compelling drug, Rolfe says. In 2002, early data showed that Velcade had stabilized or reduced M-protein, the marker for cancer burden in myeloma, in 77% of patients in that trial.

With such a potent drug on its hands, and fast-track status granted by the Food & Drug Administration, the company swiftly moved to prepare for filing a New Drug Application (NDA). But that Phase II trial "was never designed as a registration trial," Rolfe says. The situation left Millennium scrambling to sort out how it would bring the drug to market almost a year ahead of schedule.

Pulling together the manufacturing component of its NDA was one of the bigger hurdles to meeting that accelerated timeline, says John Nystrom, vice president of pharmaceutical operations at Millennium. Until that stage, ASI had been manufacturing the drug on a fairly small scale. It would need to ramp up its process significantly to prepare for a commercial launch.

"Though we had the process developed almost two years before the drug was launched, there was still a tremendous amount of work to do," says Stephen A. Munk, ASI's president and chief executive officer.

Millennium charged ASI with improving the existing process and generating enough material to support the launch of Velcade. In the meantime, Millennium enlisted Boehringer Ingelheim to conduct parametric studies to help optimize and improve its understanding of the process.

"Ash Stevens was able to deliver a better process, even under this accelerated program, and get Millennium enough material to gather all the necessary data," Nystrom says. FDA accepted Millennium's NDA for Velcade in March 2003. The drug was approved in May and launched just six days after its approval.

That success was in no small part due to the nimbleness of a small company such as ASI, Munk maintains. In the end, ASI was able to cut the number of process steps in half, reduce the solvent volume by a factor of 100, and significantly reduce the cost of making the cytotoxic drug, he notes.

Another critical factor that enabled the team to come together and push the drug to market was a shared belief in its potential, Nystrom says. "It's tough in the biotech world because sometimes it's the marriage of the poor," he notes. Though profit margins are slender for fine chemicals companies such as ASI, they sometimes have to take a risk and sink money into a project years before it will come to market-and years before they see any returns.

The willingness to take that risk is an important quality in a contract manufacturing partner such as ASI, Nystrom says. "They had the same faith in the molecule that we did," he says.

That faith stems in part from Munk's diverse background. Before taking the reins at ASI, Munk spent six years as a medicinal chemist at Allergan, where he helped lead the α2-adrenergic drug discovery team.

He says the experience enabled him to "understand intimately what our clients have gone through to get a potent agent." Perhaps more important, that time spent developing drugs has shaped his willingness to take a gamble on a manufacturing project that other people would view as risky, as is often the case with a first-in-class product such as Velcade.

"As I read the literature, it seemed like a unique concept scientifically and something others weren't working on," Munk says. "In life, you're often presented with 'me-too' choices; there is rarely the opportunity to do something truly unique."

Taking those risks has paid off for both companies: U.S. sales of the drug totaled $192 million in 2005. Millennium licensed the rights to Velcade outside of the U.S. to Johnson & Johnson and is now working with J&J to bring on an additional manufacturer to ensure future supply.

Millennium also continues to expand the market for Velcade, pursuing approval for additional patient populations with multiple myeloma, planning a Phase III trial to see whether combining Velcade with the monoclonal antibody Rituxan can treat non-Hodgkins lymphoma, and initiating earlier-phase trials in lung cancer and other types of tumors.

Although the market for the drug is constantly expanding, Munk says the process that came out of that push to market in 2002 is sufficiently robust and economical to be "scalable to any batch size Millennium should want."

Share X
To send an e-mail to multiple recipients, separate e-mail addresses with a comma, semicolon, or both.
Title: Beat The Clock
Author: Lisa M. Jarvis
Chemical & Engineering News will not share your email address with any other person or company.