From Peptides To Small Molecules

From Peptides To Small Molecules

Adherex Technologies has evolved over the past decade from a small Canadian start-up into an established biopharmaceutical firm that has a peptide drug in Phase II clinical trials and a collaboration with one of the drug industry's largest players. Now, with the help of Scynexis, a chemistry-focused drug discovery and development firm, Adherex is expanding its core technology into the small-molecule realm.

Experienced
[+]Enlarge
Credit: Scynexis photo
More than half of the scientists on Scynexis' staff have Ph.D.s. Two of them are Weiming Fan (left) and Allan Long. 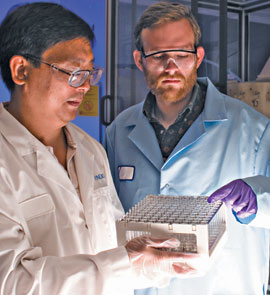 Credit: Scynexis photo
More than half of the scientists on Scynexis' staff have Ph.D.s. Two of them are Weiming Fan (left) and Allan Long.

Adherex was launched in 1996 as a spin-off from the McGill University labs of cell biologist Orest Blaschuk, who discovered peptides that inhibit the action of N-cadherin, a protein that straddles the cell wall of certain tumor cells and aids in cell communication. Subsequent cell culture studies found that inhibiting N-cadherin binding between tumor cells causes apoptosis, or cell death, and tumor vascular disruption by interfering with survival signaling mechanisms.

In its early years, Adherex received typical start-up company support from the university and angel investors. In 1999, it moved from Montreal to Ottawa. Then, in 2001, it launched an unusual "retail" initial public offering, in which the majority of stock buyers were average citizens rather than professional investors.

The offering was successful, raising $10 million Canadian, but its unconventional nature discouraged subsequent investment by professionals. By 2002, Adherex was struggling and in need of firm guidance from experienced managers.

That January, the company hired Robin J. Norris, a British-educated medical doctor and veteran of several other biotech firms, big and small, as chief operating officer. "I recognized immediately that it needed strategic help," Norris now says. "A company may have great technology that's going to make fabulous therapeutics, but to get there you often need to do a lot of business things."

He and other managers searched for a "transforming event" to revive Adherex and found it later that year in the form of a merger with Oxiquant, a U.S.-based company with rights to chemoenhancement and chemoprotection technology developed, respectively, by Rutgers University and Oregon Health & Science University.

William P. Peters, a veteran oncologist and adviser to Oxiquant, joined Adherex as chief executive officer in March 2003, and he and Norris soon hit the road to tell the new Adherex story to institutional investors. The company was essentially broke when they started the effort, Norris says, but by June 2004 it had more than $20 million in the bank.

Phase I and II trials are ongoing in Europe, the U.S., and Canada, involving patients with tumors that express N-cadherin, a cancer category that can include breast, lung, colon, ovarian, and melanoma, among others. "In our Phase I experience, we have seen anticancer activity even in single doses," Norris says. "Some patients who received repeated doses had repression of tumor biomarkers or stable disease that persisted for six or seven months." Adherex hopes to have complete results from some of the trials in the second half of 2006 and to enter Phase III as early as 2007.

ADH-1 won a vote of confidence last July when Adherex entered a development and license agreement with GlaxoSmithKline, in which the drug giant made a $3 million equity investment in Adherex. Under the deal, Adherex in-licensed the oncology treatment eniluracil, which had been sitting on the shelf at GSK, while GSK obtained an option to license ADH-1.

Although Adherex executives are happy with ADH-1's progress, Norris says they have long seen the potential to develop orally active N-cadherin antagonist therapies based on small molecules. Such drugs could treat other ailments or become follow-ons to ADH-1. "Even when we were near broke in 2002-03, we did some screening against in-house assays, looking for small molecules," he says.

Those early efforts yielded several molecules that appeared to block N-cadherin binding with even greater potency than ADH-1. Because it lacked in-house chemistry capabilities, Adherex wasn't able to pursue the leads further. But last March, with its financial footing more secure, Adherex signed an agreement with Scynexis that allowed it to tackle small-molecule N-cadherin antagonists in earnest.

According to Norris, Scynexis was one of several potential chemistry partners that were vetted. Adherex executives were familiar with the company because of its good local reputation-both firms are based in Research Triangle Park-and because Brian E. Huber, Adherex's chief scientific officer, knew Michael Peel, Scynexis' director of medicinal chemistry, from previous stints at GSK. More important, the executives were sold on Scynexis' ability to handle all the chemistry needs of a small firm's drug discovery and development program.

Peel says this full-service ability is relatively new for Scynexis. The company was formed in 2000 by a group of former Aventis scientists who pooled their severance pay to form a contract chemistry firm. It raised $40 million, with a final $29 million secured in 2002. Later that year, it signed chemistry-based drug research deals with two big pharma firms, Merck & Co. and Roche. Today, Scynexis employs 113 people; 85 are chemists and more than half of those have Ph.D.s.

Peel explains that Scynexis started out primarily as a compound-library developer but evolved in its first two years to offer drug hit identification, lead optimization, and current Good Manufacturing Practices synthesis of compounds for Phase I and II clinical trials. In order to better serve chemistry-poor biotechs, Scynexis spent 2003-04 acquiring skills in related areas such as biometabolism and pharmacokinetic support.

Now, Peel claims, "we can take the chemistry side of drug discovery all the way from the crystal structure of a target to lead optimization, then to the iterative process of improving potency and oral bioavailability, and on through toxicology studies. Adherex is the ideal opportunity to bring in all of these capabilities."

Although Scynexis can start with a drug target and evolve hits from there, in this case it had the benefit of the leads Adherex had identified a few years earlier. With 3-D structures of these small molecules in hand, Scynexis scientists proceeded on two fronts under the project leadership of medicinal chemist Gilles Ouvry.

On one front, they combined Adherex's insights into N-cadherin's crystal structure with their own computational chemistry capabilities to screen virtual compound libraries in silico. On the other, they worked with other Adherex outsourcing partners to screen actual small molecules against specialized assays.

One year later, with the help of more than a dozen Scynexis scientists, Adherex has several promising small-molecule drug candidates in hand. Scynexis medicinal chemists are now tweaking them to optimize traits like potency, toxicity, and oral bioavailability.

In a perfect world, Norris would let the chemists tinker until they arrived at the perfect small-molecule antagonist of N-cadherin. But Adherex operates in the real world of time-crunched biotech drug development, and, Norris says, it has a very real target: "Our goal is to get a small molecule into clinical trials in 2007."

Share X
To send an e-mail to multiple recipients, separate e-mail addresses with a comma, semicolon, or both.
Title: From Peptides To Small Molecules
Author: Michael McCoy
Chemical & Engineering News will not share your email address with any other person or company.