Recognizing the value of its senior members, ACS finds ways to keep them engaged

When members of the American Chemical Society retire from their chemistry vocations, they can feel detached from the society. There is no more research to present, no pressing need for professional development, and no desire to get ahead. But the society needs these people more than ever because they come with a wealth of expertise and a rare commodity: time.

For years, some local sections have been mobilizing their senior members, offering them opportunities to socialize, network, and give back to the community. Now, ACS as a whole has taken notice, and a fledgling program called Silver Circle is heading a broader effort to tap into this unique and valuable resource.

Senior chemists make up a significant proportion of ACS membership. In 2005, retired and emeritus members made up nearly 15% of ACS's membership. This percentage is only expected to grow in the coming years as the baby-boom generation enters retirement.

Currently, ACS has relatively few programs geared specifically toward its senior members. "We have really been neglecting this particular group," says ACS Past-President Eli M. Pearce. "These are people who are talented and have something to offer. This professional society should be taking advantage of their abilities and experience and keep them involved."

Got Drive
[+]Enlarge
Credit: Sandy Kerr
At 86, Meyer is more engaged in ACS activities than ever. 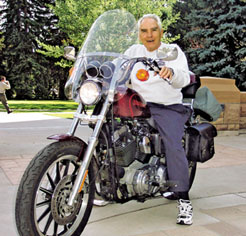 Credit: Sandy Kerr
At 86, Meyer is more engaged in ACS activities than ever.

Some local sections are doing just that. For example, the Chemical Society of Washington's Retired Chemists Group meets three times a year for lunch followed by a lecture or field trip. In June, about 30 retired chemists gathered at a seafood restaurant in Washington, D.C. They reminisced about the days when the region was mostly farmland, chatted about their hobbies and recent projects, and joked about their advanced ages. After lunch, attendees saw a slide show highlighting a fellow member's recent trip to Portugal. The group's next gathering, in September, will include a trip to the Washington Post's printing plant.

The Delaware Section's ChemVets group offers a similar program. About 35 retired chemists and engineers meet for lunch and a lecture eight times a year at a local company cafeteria. Recent lecture topics have included new inks and applications for the ink-jet printer, software for the radiation-curing industry, and the development of a particular DuPont semiconductor technology. "I think most of us who were active as scientists recognize that if you stay mentally active, you remain physically fit, too," says David F. Eaton, chair of ChemVets. Their next meeting, in September, will include a lecture about global warming.

Not all local sections focus on networking and self-improvement. Some make educational outreach their priority. The Cincinnati Section's Retired Chemists Committee spends roughly two months every year performing science shows for hundreds of 5th and 6th graders in two local school districts. Ralph Damico, chair of the committee, says that next year they will expand to include a third school district, and he is looking for more retired chemists to join their troupe.

About 20 other local sections also have groups geared toward seniors, each with its own flavor and focus. Pearce praises these homegrown efforts, but he believes ACS needs to do more on a national level to involve its senior members. "This has been moving forward, but I think it's bigger than local sections," he says.

In fact, Pearce says he would like to see seniors have their own committee, just like the Women Chemists Committee and the Committee on Minority Affairs. "There are all kinds of committees serving constituencies right now, and this is going to be one of the largest constituencies in our professional society," Pearce says.

In March 2003, Pearce wrote a comment in C&EN in which he coined the term "silver circle" to describe this growing body of senior ACS members (C&EN, March 24, 2003, page 39). "Retirement has become a time for renewal, not retreat," he wrote. "We have a wonderful opportunity to harness the expertise and enthusiasm of our growing number of senior members before they lose interest in ACS activities and let their memberships lapse."

The comment prompted the formation of the Silver Circle Working Group and the appointment of an ACS staff member to serve as a liaison to the society's senior members. Another development is a breakfast for senior members at the national meetings.

Silver Circle kicked off its first breakfast last fall at the ACS national meeting in Washington, D.C. "The idea of the senior breakfast is to bring people together and to hear their viewpoints," says Clifford W. J. Chang, chair of the working group. At this year's spring national meeting in Atlanta, Silver Circle organized a second breakfast that drew 80 people, double the attendance of the Washington breakfast. The lively exchange of ideas during the after-breakfast discussion indicated that enthusiasm among this group is growing.

Pearce thinks the society could do even more. "This is just the bare beginnings," he says. ACS Immediate Past-President William F. Carroll, who delivered a talk on innovation at the breakfast in Atlanta, says one of the challenges will be to keep the momentum from the breakfasts going. "The question is, 'Can you turn that enthusiasm into results and action?'" he asks.

Thomas R. Beattie, chair-elect of the Silver Circle Working Group, says that sometimes all seniors need is a little nudge. "People don't always go out and seek these things for themselves. If you can call it to their attention and spark a little interest, it's amazing how they can jump into it."

There are many ways to get involved. The Silver Circle's website, chemistry.org/silvercircle.html, offers a starter kit with numerous program ideas. For example, seniors could organize a "chemistry of cooking" potluck dinner where everyone brings a dish and explains some aspect of the chemistry involved in preparing the dish. They could also participate in a career forum to advise younger chemists who are considering entering a particular field or industry.

Other ideas include serving as a tour speaker with the ACS Speaker Service, becoming a coordinator for Project SEED or the Chemistry Olympiad, joining the Legislative Action Network (chemistry.org/takeaction), and becoming involved in a regional meeting. The possibilities are virtually endless.

The next step is getting people to come out. Patrick J. (Jerry) Hannan, who retired in 1987 from the Naval Research Laboratory, admitted that it took him a long time after he retired before he began attending lunches organized by the Chemical Society of Washington's Retired Chemists Group. "To be honest, I didn't want to admit to myself that I was retired," he said.

Hannan is now convinced that participation in such groups pays off. He recently wrote a book called "Serendipity, Luck, and Wisdom in Research" and gave a presentation on the subject earlier this year at a meeting of the Retired Chemists Group. His talk prompted people in the audience to share their own stories about serendipitous findings in research.

Many of the most active senior chemists have been go-getters their entire careers, both in their personal lives and within ACS. They continue to serve as councilors, local section leaders, and mentors. Take E. Gerald Meyer, for example. At 86, Meyer, emeritus professor of chemistry and dean of arts and sciences at the University of Wyoming, still enjoys white-water rafting; rides his motorcycle; participates in the Senior Olympics; manages the coal company he cofounded; attends national meetings; reads technical papers; serves on the Rocky Mountain and Northwest Regions' Boards; and jets all over the country accepting awards, serving on various committees and task forces, and touring with the ACS Speaker Service.

Meyer admits that his age forces him to adjust the way he does some things, but he emphasizes that keeping mentally and physically active is important for a good quality of life. Earlier this year, Meyer accepted the ACS Award for Volunteer Service.

Meyer is optimistic about Silver Circle and challenges all retired ACS members to get out and do something that could benefit themselves as well as the society. He suggests that retired chemists organize a symposium at a future ACS national meeting where they could talk about their current projects and perhaps inspire and trigger ideas among other retired chemists.

James A. Hammond, 81, is another one of these "super seniors." At the spring national meeting in Atlanta, Hammond was rushing from one symposium to the next, albeit a little slower than everyone else. A retired chemist with a varied career, Hammond still consults for companies that turn waste products into fuel, serves as a councilor for the San Gorgonio Section in California, and mentors high school students. He likes to fiddle around in the chemistry lab he set up in the garage and still finds time to make a mean clam chowder.

Asked if he sees himself slowing down, he responded: "Not if I can help it." He plans to organize a symposium on fuel and environmental chemistry at a future ACS national meeting and suggests that ACS develop a database of senior experts like himself to whom others can turn if they need technical advice.

He has many other ideas, including how to motivate more seniors to get involved in ACS activities. It's relatively simple. "All you have to do is ask," he says.

Employment
The employment outlook for chemists
Employment
It’s time to reenvision the faculty hiring process
Diversity
Reactions
Share X
To send an e-mail to multiple recipients, separate e-mail addresses with a comma, semicolon, or both.
Title: A Senior Movement
Author: Linda Wang
Chemical & Engineering News will not share your email address with any other person or company.