Scientists get their first glimpse of how acylfulvenes damage DNA.

Acylfulvenes are a potent class of antitumor agents that were inspired by a toxin in the luminescent jack-o'-lantern mushroom. Although the compounds have been thought to exert their cytotoxicity through DNA alkylation, it hasn't been clear exactly how acylfulvenes might interact with DNA.

The mechanism became clearer with the first structural characterization of acylfulvene-DNA adducts, presented by Shana J. Sturla, a medicinal chemist at the University of Minnesota, before the Division of Chemical Toxicology at the American Chemical Society meeting this week in San Francisco. 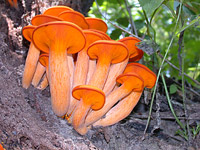 Once in the cell, acylfulvenes are bioactivated by an enzyme called AOR, which reduces the carbon-carbon double bond of the compounds'

-unsaturated ketone. Sturla and colleagues showed that the reactive intermediate created then selectively alkylates purine bases in DNA, such as adenine and guanine, creating a large, bulky adduct.

How these adducts contribute to cytotoxicity will be the focus of future work, but there are several possibilities, Sturla said. The unwieldy adducts may block DNA replication and transcription, or they may interfere with other biochemical processes in the nucleus. The adducts are also unstable under physiological conditions and may break off with the purine base attached, leaving a void in the DNA.

"Sturla's work has real-life relevance, as these [acylfulvene] compounds are currently being tested" in Phase II clinical trials, noted Kent S. Gates, a bioorganic chemist at the University of Missouri and cochair of the session in which Sturla presented her work.

Understanding the chemical pathways that acylfulvenes undergo in tumor cells is important for designing better analogs and new strategies that enhance their therapeutic potential, Sturla said.