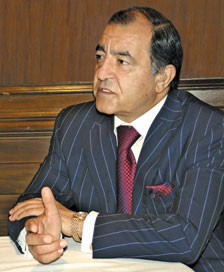 Rockwood Holdings isn't a well-known name in the chemical industry, and that's not only because it's a new one. Rather than trying to raise its public profile, Rockwood's priorities are nurturing its individual businesses and taking advantage of the opportunity it has to build a chemical company from scratch.

Rockwood's chief executive officer, Seifi Ghasemi, says he has no desire to promote a fancy name that has been concocted by a consultant. "I get very irritated when people spend millions of dollars trying to come up with new names for companies," he complains. Rockwood took its name from an iron oxide pigment business it acquired. It seems fine with him that the businesses that make up Rockwood are generally better known than the firm that owns them.

A year later, Rockwood launched an initial public offering on the New York Stock Exchange that raised about $400 million, most of which was used to pay down debt. KKR still holds a 51% stake in the company, which today has more than $3.1 billion in annual sales.

Ghasemi, who earlier in his career headed the North American arm of industrial gases maker BOC, says Rockwood is poised to expand. "We are focused on good potential for organic growth," he says.

A major growth driver for the company, he says, is its Chemetall lithium chemicals business, which is integrated all the way back to evaporation ponds in Chile. Lithium chemicals go into batteries for laptop computers and cellular phones, and Ghasemi expects future lithium battery penetration into applications such as power tools and hybrid cars. Beyond batteries, he points to growing use of lithium to make alloys used in aircraft and increasing opportunities for lithium in pharmaceutical synthesis.

Rockwood has a leading position in alkaline copper quaternary wood preservatives, which have replaced chromated copper arsenate in the treatment of lumber for home construction. The company also sees growing use of its iron oxide-based pigments for concrete used in applications such as paving stones.

The Sachtleben unit makes anatase TiO2 for niche applications such as synthetic fibers. The unit is also developing TiO2 nanoparticles for specialized applications in paint and consumer products.

In addition, CeramTec is enjoying growth in medical applications such as hip replacement joints, because ceramic prostheses are durable, and they aren't rejected by patients' immune systems. Ghasemi sees additional opportunities. "Because of the high-temperature nature of ceramics, there are all kinds of industrial areas where we are seeing growth," he says.

Analysts are impressed with some of Rockwood's businesses, particularly ceramics, TiO2, wood treatment, and lithium chemicals. Sergey Vasnetsov, a stock analyst with Lehman Brothers, told clients late last year that the company will likely meet its long-term target of 5% annual growth. "Rockwood benefits from a leadership position in many of the markets in which it operates," he wrote. "The niche nature and Rockwood's dominance in these markets serve as an effective barrier to entry to many smaller potential competitors."

And Mark Gulley, an analyst with Soleil, wrote last month that the ceramics, TiO2, lithium chemicals, and metal surface treatment units are "key winners." But he warned about other parts of Rockwood's portfolio. "Rockwood has ended up with an unwieldy portfolio that needs to be streamlined, in our view," he said.

Streamlining is on Ghasemi's mind as well, and he is evaluating strategic options for Novasep, which he calls "noncore." "The profile of that business doesn't fit the profile of what we want to do at Rockwood," he says. "We want our businesses in Rockwood to be market leaders on a global scale and technology leaders."

But Ghasemi defends his decision to buy Novasep, calling it a necessary complement to the Dynamit Nobel purchase. During the negotiations, he explains, Rockwood rebuffed MG Technologies' attempt to include the $1 billion-per-year auto-parts-maker Dynamit Nobel Kunststoff in the deal. Rockwood agreed instead to buy DNES Custom Synthesis, a business it would otherwise not have taken.

After the deal was completed, Ghasemi says, Rockwood concluded that DNES needed restructuring, a broader technology base, and new leadership. Its first step was to acquire Novasep and merge it with DNES. As a second step, it sold DNES's Rohner pharmaceutical chemicals unit to Arques Industries.

Novasep is seeing some improvement, posting a 55% increase in before-tax profits in the second quarter of this year versus the year-ago period. It also recently inked a contract to make Tamiflu ingredients for Roche (C&EN, March 20, page 10).

Ghasemi attributes the gains both to the restructuring at Novasep and to overall improvements in the fine chemicals sector. "Not only our business has seen a turnaround, but in general, that industry is seeing a turnaround," he says. According to Ghasemi, the environment hasn't been right to consider a divestiture.

Another Rockwood business Ghasemi calls noncore is electronic chemicals, which makes photomasks and high-purity chemicals and offers silicon wafer reclamation services. Ghasemi says the electronic industry's cyclicality is a problem for Rockwood, which values stability. He also notes that the business doesn't have the heft in electronics that other Rockwood businesses have in their respective industries. "It is a good business," he says. "But we are not a leader."

Ghasemi says Rockwood is "on the fence" about whether its plastics compounding operation is a core business. "We are watching the business very carefully," he says. The company recently agreed to buy the compounding business of the U.K.'s Scapa.

According to Ghasemi, his company is open to more acquisitions, though they would likely be modest "bolt on" businesses that fit with its existing specialty chemical, additive, and advanced material operations. "We need to look at acquisitions that help us strengthen our market position and have synergies," he says. "We are not enamored with the idea of running a $10 billion company. The important thing is to make money, not size."

Unlike many other chemical companies, Rockwood has made no effort to tightly organize its collection of businesses under a corporate umbrella. Each of them retains its original name and is run like a stand-alone company, complete with its own president and chief financial officer. Rockwood is an identity for the investment community. "Our customers know Sachtleben," Ghasemi says. "To change the name to Rockwood TiO2 doesn't add value."

Though the businesses are run separately, Ghasemi says Rockwood has an active hand in managing them. "I don't want to use the word conglomerate too much, because we are not just a financial institution trying to run these things on financials," he says. "We do actually run these businesses."

In addition to interacting with Wall Street, Rockwood sets strategic direction for the businesses and handles administrative functions. Ghasemi adds that Rockwood also provides a helping hand if businesses are struggling. "We focus our energy on trying to help the businesses that require it, whether it is strategic acquisition help, operational help, or bringing in a new dimension in analyzing the business," he says.

Ghasemi believes that any more centralization would be excessive and draws a contrast with chemical companies that hold their businesses more closely. "It sounds great to sit back in a shiny new building, put a bunch of Ph.D.s in there and a sign that says 'Rockwood R&D Center,' " he says. "But is that more effective than having the Ph.D.s in the lithium business and in the ceramics business focused with their people right at their plant? I think it is much more effective to be decentralized."

Ghasemi says Rockwood has added value to the businesses it has acquired by peeling off layers of bureaucracy: "What we have done is free these people. It is like getting them out of jail." The result, he says, is that employees are focused more on customers than on internal procedures.

Rockwood also differs from its peers in the chemical industry in its reliance on inorganic raw materials. "We want businesses where the raw materials are stable," Ghasemi says. "So usually we shy away from getting into businesses that are so-called organic chemistry." The wood preservative business, however, has been pinched by copper prices, which have more than doubled over the past couple of years.

Because only about of a third of Rockwood is publicly traded, analysts see a secondary stock offering in its future. "The only reason there would be a secondary offering is if some of our current investors want to monetize their holdings," Ghasemi says. But because he believes Rockwood's share price is currently undervalued, monetization will have to wait, he says. "It is very much a function of the stock price."

A sell-off at a handsome profit is usually the end game for the private equity firms that have become prominent chemical industry players in recent years. As KKR did with Rockwood, Apollo Management formed Hexion Specialty Chemicals through a series of acquisitions in thermoset resins. Arsenal Capital Partners is forming Vertellus Specialties out of Reilly Industries and Rutherford Chemicals. Blackstone gobbled up Celanese and moved it back to the U.S. And Access Industries now owns Basell, the former polyolefins joint venture between BASF and Shell.

Ghasemi argues that private equity firms have had a positive influence on the chemical industry. "They create an intense focus on performance," he says. "The way private equity has done that is by having a significant amount of debt on these companies. There it becomes a matter of life and death." For its part, Rockwood has about $2.8 billion in debt, 4.8 times its earnings before taxes last year. The business had a debt-to-earnings ratio of 7.0 at the end of 2003, before its earnings improved.

ROCKWOOD AT A GLANCE