Science is in fashion these days—literally. And that doesn't mean pocket protectors are in vogue. Rather, high tech and high fashion have come together to create cutting-edge geek chic.

Dutch electronics giant Philips recently showed off its Lumalive textiles, fabrics that integrate flexible arrays of colorful light-emitting diodes without compromising the cloth's softness or flexibility. Clothes and upholstery made with the material can display hypnotic animated graphics. One friendly Lumalive-covered chair greets potential sitters with a glowing "HI" on its headrest.

Elsewhere, innovative fashion designer Hussein Chalayan collaborated with London-based engineering firm 2D3D for his spring 2007 collection, which wowed audiences this month at Paris Fashion Week. Chalayan's runway show featured a handful of dresses and hats that changed length, shape, and style all by themselves.

Hemlines shortened, tops zipped, and collars unfurled, thanks to tiny remote-controlled motors and hidden battery-powered "bum pads." For the finale, a model's simple dress ascended into her hat until she was left in her birthday suit. "Perhaps this pared-down part of his collection will be available in shops," quipped London's Daily Mail, "as the Emperor's New Clothes range." 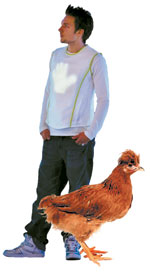 Credit: Philips Photo, Dreamstime
Lighting up the runway For the birds: Feathered fashion

A new crop of sustainable high-tech garments is getting the attention of fashion-forward consumers. The environmentally friendly, biodegradable fabrics, made from corn and chicken feathers, reduce agricultural waste and won't pile up in landfills.

Kyodo News reports that Japanese textile maker Unitika recently unveiled a swimsuit and clothing line made of corn-based fabrics. Eco-fashionistas might think twice before dirtying the duds, however. They're designed to be decomposed by bacteria when buried in soil.

University of Nebraska textile scientists Yiqi Yang and Narendra Reddy are trying to make the fluffy barbs on chicken feathers into lightweight, insulating textiles. The barbs' honeycombed microstructures are filled with tiny air pockets. This makes the feathers good shock absorbers, presumably for when the birds cross the road.

If science has become so fashionable, why is it that "mad scientists" are the only chemistry Halloween costumes the Newscripts gang can find? Tired of teasing our hair out, we turned to C&EN for some more creative suggestions.

Assistant Managing Editor Robin Giroux recalled a Halloween party her older brother Jerry Allison hosted in the 1970s when he was a chemistry professor at Lafayette College in Easton, Pa. "The costumes I remember include a benzene ring (six students joined in some kind of flexible thingie), a free radical (a sign-carrying hippie sporting a broken shackle), and a quantum mechanic (wearing coveralls and carrying a toolbox)," she says. Giroux's sister-in-law, Carole Allison, added that one student came wearing a graduated cylinder on top of his head. "He was, of course, an undergraduate!"

Giroux also remembered an ACS Halloween party that coincided with National Chemistry Week. One staffer, Eric Blendermann, dressed in a sleek black suit, crisp white shirt, understated tie, and a name tag that said, "My Name Is O27." When asked what he was, Blendermann would reply, "The name is Bond, Chemical Bond."

Associate Editor Lisa Jarvis knew an inorganic chemist who took a Superman costume and added an "i" to the iconic "S" and was Silicon Man. Jarvis joked that with a few extra characters and extra padding, he could have been Silicone Woman.

"For Marie Curie, wear a large, glowing necklace, and say, 'Do you like it? It's Polonium. It's going to be all the rage.' Or shake a transistor radio continuously and say, 'I'm studying radio-activity.'"

Working on a budget? Wade says look no further than the periodic table. Wear aluminum foil and go as unlucky element 13.

This week's column was written by Bethany Halford. Please send comments and suggestions to newscripts@acs.org.