For 60 years, the synthetic laundry detergent has been the cure for washday blues 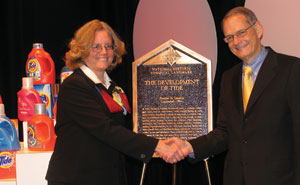 I 'm lucky. I can honestly say that I have never had "washday blues." I actually like doing laundry, but if I had been doing the wash before 1946, I wouldn't have liked it a bit.

In 1946, Procter & Gamble launched Tide, the world's first heavy-duty synthetic laundry detergent, and doing the wash hasn't been the same since. Before Tide, most people used soap flakes to clean fabrics. In areas with hard water, soap left scum—called curds—that couldn't be rinsed off of clothes; white clothes turned gray, colors faded, and heavy soiling didn't clean out. Laundry was labor-intensive, and the results weren't good. That would give almost anyone the blues.

Tide brand laundry detergent was the culmination of a search to replace traditional soaps, and the development of the product by P&G was honored by the American Chemical Society on Sept. 25 as a National Historic Chemical Landmark. At ceremonies in Cincinnati, ACS President-Elect Catherine T. Hunt presented a commemorative bronze plaque to G. Gilbert Cloyd, chief technology officer of Procter & Gamble.

In a brief presentation, Hunt noted that ACS established the chemical landmarks program in 1992 to recognize seminal events in the history of chemistry and to increase public awareness of the contributions of chemistry to society.

Established in 1837, P&G was created in Cincinnati by an Irish soapmaker and an English candlemaker. It is now a global company with 2.5 billion customers in 180 countries. According to Cloyd, P&G has on-ground operations in nearly 90 countries and, in the fiscal year that just ended, had worldwide sales approaching $70 billion. Of its more than 300 brands, 22 have sales of more than $1 billion per year. "Tide brand alone realized almost $3 billion in revenue in 2005," Cloyd said.

At the ceremonies, Sharon J. Mitchell, vice president of R&D Global Fabric Care at P&G, gave a history of Tide and the innovations that put it on top of the market. She said that P&G's initial foray into synthetic detergent was Dreft, which was introduced in 1933. Dreft, composed of an alkyl sulfate, represented a breakthrough because it cleaned clothes in hard water—a particular benefit for residents from the Midwest to the Rocky Mountains—without leaving curds. But it did not clean heavily soiled clothes well.

P&G chemists knew that the cleaning ability of synthetic detergents could be boosted by adding "builders," compounds that penetrate clothing more deeply to remove stains. But they left clothes harsh and stiff because the builders used, usually sodium phosphates, reacted with the water's hardness to form insoluble deposits that could not be rinsed away.

It was frustrating. By the end of the 1930s, P&G had all but given up on attempts to develop a heavy-duty synthetic detergent. But one researcher, David (Dick) Byerly, refused to shelve what became known in the company as Project X. He tried sodium pyrophosphate as the builder. It cleaned well, but the washed clothing felt like sandpaper, Mitchell said.

By 1941, Byerly concluded that sodium tripolyphosphate was the best builder. At the same time, he had a counterintuitive breakthrough. Previously, researchers had assumed that the less builder used, the better, because, they thought, it was the builder that left clothes stiff. But Byerly discovered that if he boosted the level of the builder to well above that of the cleaning agent, he got a surprising result: The detergent cleaned well and left clothes soft.

In July 1943, a record of invention was filed with P&G's patent department, but all plans to market Tide had to be delayed until World War II was over. After the fighting stopped and construction was decontrolled, P&G started building phosphate plants and new spray-drying towers. Tide entered test markets in 1946.

On the basis of the results of this test marketing, improvements were soon made to the formula. Methylcellulose was added to prevent soil redeposition, and sodium silicate was added to prevent washing machine corrosion. Once the correct formula was found, P&G rushed the new product, Tide, to the market. It was an instant success, quickly selling out in markets all over the U.S.

Tide was rolled out for national distribution in October 1947 and quickly became the market leader. For the first five years, sales were limited only by P&G's capacity to produce the product. By the early 1950s, Tide captured more than 30% of the laundry market and subsequently became the number one selling detergent.

Since then, Tide has had more than 80 significant package and product innovations. According to Cloyd, the brand owes its longevity to meeting the demands of changing times and changing consumers. Innovations like Tide with Enzymes, Tide Liquid, Tide with Bleach, and more recently Tide with Febreeze Freshness, Tide Coldwater, and Tide with a Touch of Downy continue the Tide revolution.

Sustainability
US Senate passes sustainable chemistry legislation
Environment
P2 and ADM pair up for renewable products
Recycling
Coca-Cola bottler invests in recycling
Share X
To send an e-mail to multiple recipients, separate e-mail addresses with a comma, semicolon, or both.
Title: Tide Honored As Historic Landmark
Author: Linda Raber
Chemical & Engineering News will not share your email address with any other person or company.