The Gush Of Water On Mars

FLASH FLOOD
[+]Enlarge
Credit: NASA/JPL/MSSS
ng class="imageTitle">FLASH FLOOD</strong> This image from the Mars Global Surveyor shows a recent feature in a gully on Mars that may have been caused by liquid water. 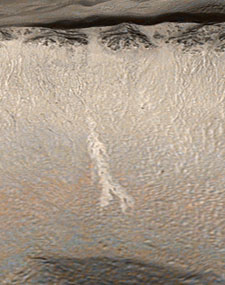 Credit: NASA/JPL/MSSS
ng class="imageTitle">FLASH FLOOD</strong> This image from the Mars Global Surveyor shows a recent feature in a gully on Mars that may have been caused by liquid water.

Images of Mars's surface show evidence that as recently as a few years ago, liquid water, possibly in the form of a debris-filled sludge, may have poured down mid-latitude gullies, leaving bright tracks in the martian dirt.

The notion that liquid water once flowed on ancient Mars is well accepted. Some scientists, noting apparent runoff channels in relatively young craters, have suggested that water could have flowed much more recently: at some point from a million years ago to the present.

But now, scientists have the most tantalizing evidence yet for that recent flow scenario. Some of the final images taken by NASA's Mars Global Surveyor before it went silent last month and displayed at a press conference on Dec. 6 show features that weren't there when the spacecraft scanned the same areas in 1999.

Out of images of tens of thousands of martian gullies, Michael C. Malin, Kenneth S. Edgett, and colleagues at Malin Space Science Systems in San Diego and colleagues found two several-hundred-meter-long patches in gullies inside craters in the southern hemisphere. At the press conference, Malin and Edgett outlined evidence they believe strongly suggests that the features were caused by a "flash flood" of some water-bearing substance and not merely by a dust slide or other dry geological event. The results have just been published in Science (2006, 314, 1573).

Generally, it's agreed that liquid water flows through gullies, far away from regions where dust avalanches occur, Edgett said. The shape of the features—long, thin arms with a splay of fingers at the end—indicates the material was fluid enough to be diverted around small obstacles. And unlike dark-colored dust avalanches, the new features are very light. "When you disrupt dust on Mars, the surface usually darkens," Edgett pointed out. Brightness usually indicates frost or, possibly, minerals or fine grains precipitated from water.

Just what prompts these upwellings remains to be figured out, the team said. Malin suggested that water might come up from Mars's deep interior through fractures and cracks. When it reaches the surface, it freezes, forming an ice plug. Water backs up behind the ice dam, which finally breaks, spilling over the surface in a brief outflow and picking up debris as it flows down the channel.

The team hopes to answer some of those questions using ultra-high-resolution imaging instruments on board NASA's Mars Reconnaissance Orbiter, which recently began mapping the planet.

The team also found that Mars gets a regular spattering of meteorites; they found 20 impact craters, spread over about 30% of the planet, that appeared during the past seven years. The impact frequency agrees with that predicted by models and carries implications for human colonization of Mars, Malin said. "If you lived on Mars for 20 years, you would live close enough to hear [an impact]," he said.