With disposable equipment, Drug and vaccine makers are seeing advantages in cost and time to market 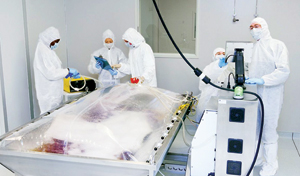 "WOULD YOU PREFER stainless steel or plastic?" It sounds like a scaled-up version of the environmental choice faced at a supermarket checkout. But biopharmaceutical and vaccine manufacturers are beginning to see economic advantages to going with single-use plastics for major portions of their production processes.

Vendors of disposable processing gear say rapid advances in the development of biologics and improvements in plastics technology are ushering their equipment into many of the steps involved in biopharmaceutical production, including containment, fermentation, mixing, filtering, and chromatography. The result is an industry experiencing record sales growth and a vigorous consolidation.

Vendors and users claim that disposable systems significantly reduce the cost of building and running biomanufacturing operations by eliminating the need to clean stainless steel and validate it under current Good Manufacturing Practices. Disposables are ideal for early-stage development because they eliminate the risk of installing expensive equipment for a project that might not advance further.

Processors and equipment suppliers also contend that the environmental impact of using plastics is no greater than what is presented by the materials and chemicals associated with building, running, and cleaning stainless steel. Like the cleaning chemicals used in traditional systems, plastic gear is generally incinerated, though it is sometimes recycled.

Plastic processing equipment made from a range of polymers was a high-profile attraction at the recent Interphex pharmaceutical manufacturing exhibition in New York City.

GE Healthcare exhibited the flagship technology of its new life sciences bioprocess division: a bioprocessing and cell fermentation apparatus consisting of a plastic bag of media clamped to a mechanical cradle. GE acquired the system, which mixes and oxygenates cells via a wavelike undulation, with its acquisition of Wave Biotech in April.

Manuel Nyffeler, marketing director of GE Healthcare Life Sciences' bioprocess division, says the wave of consolidation is spurred partly by user preference for dealing with large suppliers. "A lot of the disposable suppliers are small companies," Nyffeler says. "And the larger pharmaceutical companies do not want to rely on small companies for long-term supply."

Consolidation is leading to cheaper, more efficient systems, according to Nyffeler. "First, you had intravenous bag companies selling product containment bags into biologics," he recounts. "Then, filtration companies like GE Healthcare and Millipore realized that when you have a bag, you also need a filter. When you combine the two items, the sum of components gives you higher value."

Vendors say sales are growing at a 15% annual rate, up from single-digit growth two years ago.

GE was attracted to Wave Biotech's system, according to Nyffeler, because it incorporates a fundamentally different method of cell fermentation that he says is less costly and more efficient. Traditional fermentation equipment incorporates stainless steel stir tanks. "Because of the nature of the steel devices," he says, "you have to control a number of parameters: the speed and shape of the propeller, sheer force, the geometry of the container, and the way you introduce oxygen." The Wave system, on the other hand, uses a disposable plastic bag that is rocked rather than stirred.

According to Roberta Landon, a product manager at Millipore, user acceptance of disposable equipment has increased only recently. "We've had filters on the market for a number of years, but we now are seeing advances in disposables for mixing, buffer and media preparation, and formulation prior to filling."

Millipore, which has supplied disposable filters for at least 20 years, introduced a new mixing system called Mobius Mix200 that employs magnetic levitation, a disposable bag, and a side-mount impeller. It also incorporates a bottom-mounted mixer developed by NovAseptic, a company Millipore acquired in 2005. Last year, Millipore bought Newport Biosystems, a supplier of disposable bags for bioprocessing.

The main driver for adoption of the technology is enhancement of speed to market, Landon says, but acceptance by the Food & Drug Administration is also key. "FDA is becoming more open to the adoption of disposables because of the risk benefits," she says, noting that the new systems come presterilized. "There is no concern about residual chemicals contaminating your next batch."

According to Joseph Dallapiazza, director of single-use systems at Pall, an important feature of disposable gear is efficient scalability. Disposable process components can be stepped up as projects move through development, clinical trials, and commercial launch, he says.

Although many suppliers are moving quickly into the sector, he says companies are still working primarily in their traditional areas of expertise, such as filtering or mixing. Pall, Dallapiazza claims, is working to amass a comprehensive product portfolio. "We need to promote ourselves as a total systems provider of single-use technologies," he says.

Thermo Fisher Scientific has launched a disposables effort as part of its laboratory products business. Guy Broadbent, senior vice president of lab products, notes that much of the plastics ware in biomanufacturing settings is moving there from the laboratory. The company is leveraging Thermo Electron's legacy in instrumentation and Fisher Scientific's background in lab and manufacturing products to develop comprehensive disposable systems, according to Broadbent.

"WE HAVE A UNIQUE capability to move laboratory equipment into the real world," he says, citing industrial vaccine factories that employ plastic trays similar to those used in research labs.

James M. Robinson, vice president of technical and quality operations at Novavax, an 18-month-old firm, worked with stainless steel at Sanofi (now Sanofi-Aventis) for 20 years before coming to the Rockville, Md., start-up, which was equipped from its beginning with disposable processing infrastructure. Novavax has a pandemic flu vaccine moving into the clinic this year and a seasonal flu product expected to reach the clinic next year.

For Robinson, the transition involved a short period of adjustment. "When I came to Novavax and saw the approach, I wasn't quite convinced at first," he says. "But it took me about three days to see the virtues." He says he realized he had "made about a half-billion doses of influenza vaccine the hard way."

Building a disposables-based plant with the capacity to manufacture 100 million doses of vaccine can be done at 20-25% of the cost of a standard facility, Robinson says. It can also be brought on-line in half the time, since there is no need to go through a lengthy validation of new-built stainless steel. Once Novavax introduces a pandemic flu vaccine, it hopes to distribute small manufacturing plants in countries most likely to suffer outbreaks, a strategy that would not be feasible with stainless steel.

Novavax recycles its plastic bags through a program run by Maryland's Montgomery County.

Ian Shott, chief executive officer of U.K.-based contract manufacturer Excelsyn, says the general growth in the biologics market is pushing manufacturers toward disposable equipment. "We've done market studies showing that the growth in tanks and vessels has been quite dramatic over 10 years, from hundreds of thousands of liters per year to millions of liters per year," he says.

The cost of building traditional mammalian cell culture fermentation plants is steep, Shott notes, because temperature, pH, and other variables must be tightly controlled. Add in high operating costs and plastics are a particularly attractive alternative to Shott, who is an advocate of developing modular processes for chemical and biologics manufacture.

The contract manufacturer Avecia Biologics is making use of disposables in its Billingham, U.K., microbial fermentation operation. Philip Milburn, senior process technologist, says plastic bags are used instead of stainless steel tanks for holding media and buffer solutions at the facility, which was built in 2002.

Although vendors claim that their systems can be scaled up to commercial production, Milburn and Shott question the ability of equipment currently on the market to work at large scale. Milburn doubts that permanently installed fermenters and centrifuges will be replaced by disposables any time soon. Avecia, he adds, has the cleaning and process preparation down to a cost-manageable routine.

"There are limitations having to do with scale," Shott says. "You can use bags and disposable units, but generally they are not favored for some of the larger-scale applications." The Wave bag, for example, is effective for media preparation at small scale, he says, "but the amount of agitation you can get is restricted."

GE's Nyffeler acknowledges that there are capacity limits to individual Wave bag units in mixing applications, but he claims single units can be scaled up to 1,000 L for fermentation and other processes.

In general, although disposable equipment needs to be further developed, he points out that development is very much under way. "It's a moving market," Nyffeler says. "It's matured, and customer resistance is down. The understanding of how to implement disposables in current processes is going up. It opens a window of opportunity."