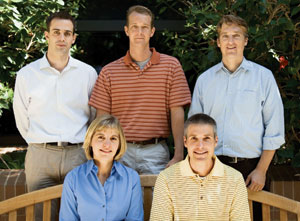 MOVE OVER MINT. Even more intense, longer lasting cooling agents have been developed in the lab in recent years, all in response to market demand.

Mint flavoring based on L-menthol is undeniably pleasant, but it has its limitations. When derived from mint plants, menthol is subject to variations in supply, price, and crop quality. Furthermore, menthol can irritate the eyes. At higher concentrations, it can cause a burning sensation and can taste bitter. Menthol also has a characteristic odor that isn't always desired. And the flavoring's minty taste and associated cooling sensation don't last very long.

Personal care companies and flavor and fragrance manufacturers have thus been motivated to hunt for nonvolatile substitutes that eliminate the unwanted properties of menthol but still elicit cooling, which consumers associate with cleanliness and freshness, according to Stefan M. Furrer, an organic chemist at the Cincinnati facility of the flavor and fragrance company Givaudan. Several of these alternative compounds have already reached the market and have been incorporated in products such as chewing gum, toothpaste, and shaving cream.

The search for menthol alternatives has been under way for more than 30 years. Back in the 1970s, the British knife, razor, and skin care company Wilkinson Sword conducted extensive research that generated more than 1,200 new cooling compounds, Furrer said during last month's American Chemical Society national meeting in Boston. He was participating in a Division of Agricultural & Food Chemistry symposium on the interactions between taste, smell, and somatosensation, which concerns sensations caused by stimulation of receptors in the skin.

The most commercially successful products derived from Wilkinson Sword's research include the menthane carboxamide known as WS-3. This compound is now off patent and is being produced by a number of companies, including Givaudan. Many other menthol alternatives, however, are still subject to patent protection. Furthermore, the available products don't meet all market needs. So Givaudan is now investing significantly in its own cooling-agent research program, led by Furrer.

Market demands continue to evolve, prompting Givaudan and other flavor producers to look for compounds that provide even more intense and longer lasting cooling effects than the current ingredients, Furrer said. Such ingredients could be used in "a toothpaste that gives a fresh breath sensation all morning long or chewing gum with cooling that lasts until your jaw is too tired to chew," he noted.

Pursuit of this goal pushed Givaudan to modify its approach to flavor discovery by supplementing its traditional methodologies with state-of-the-art technology. Givaudan's efforts in this venture rely on the findings of independent research groups at Scripps Research Institute; the University of California, San Francisco; and other institutions that identified and characterized the thermally activated ion channel TRPM8 almost simultaneously in 2002. The TRPM8 receptor, which is expressed in tissues including the oral mucosa, tongue, and skin, is activated by temperatures around 25 oC or below. The receptor can also be activated by menthol and certain other chemical agents. In either case, activation triggers a biochemical cascade of events that is translated by the brain into a perception of cooling, Furrer said.

The TRPM8 discovery enabled the development of biological assays that could be used to evaluate cooling activity in vitro. The new information on the physiological principles underlying the perception of cooling allowed Givaudan to combine bioassay technologies with quantitative sensory methodologies, leading to an efficient screening method to evaluate experimental cooling agents.

THE PAIRING of these two methods to design new cooling agents marked a "paradigm shift for flavor ingredient discovery," according to Andrew T. Daniher, who manages Givaudan Flavors' organic chemistry group. Traditionally, firms would "make a large number of molecules and evaluate them by tasting," he told C&EN. In its new process, Givaudan combined this traditional method with techniques that are more common in pharmaceutical development circles to optimize the structure and performance of its novel compounds. "We developed a rule-based approach similar to the ones currently used in medicinal chemistry," Furrer explained.

The Givaudan researchers began by studying existing cooling agents to assess the impact of structure on activity. On the basis of the results, the team designed a group of new potential cooling agents to synthesize. The researchers narrowed the list of prospective compounds by excluding those that featured toxic moieties or that weren't synthetically or economically feasible. They then synthesized thousands of the remaining compounds, including some 450 menthane carboxamide derivatives of L-menthol.

Givaudan's researchers used bioassay techniques to identify promising leads within this initial group of compounds. Trained panelists and flavorists—who blend multiple chemicals to create a desired flavor profile—then taste-tested several hundred candidates, eliminating those that were bitter or had other unpleasant characteristics. The panelists also evaluated the duration and intensity of the cooling sensation elicited by the remaining agents when added to products such as toothpaste. "The consumer would like fast onset and cooling intensity lasting for hours," Furrer explained. In some cases, that means manufacturers must combine different cooling agents to achieve the desired "temporal profile," which describes how long it takes to reach maximum cooling intensity and how long the cooling effect lasts.

Fresh And Cool
[+]Enlarge
The best-known cooling chemical is L-menthol, which is the main active ingredient in mint oil. Its volatility, odor, bitterness, and other shortcomings have led to the development of substitutes, including WS-3 and Givaudan's new Evercool 180.

The best-known cooling chemical is L-menthol, which is the main active ingredient in mint oil. Its volatility, odor, bitterness, and other shortcomings have led to the development of substitutes, including WS-3 and Givaudan's new Evercool 180.

THE RESEARCHERS next set out to learn which physicochemical properties influenced the behavior of prospective cooling agents. They discovered that potent cooling agents tend to have a molecular weight around 300. In addition, the researchers found that compounds that have lower solubility in water elicit a longer lasting cooling effect but take longer to reach maximum intensity than more soluble agents. A prospective compound must not be too soluble, however, because high solubility limits the duration of the cooling effect. Furthermore, a developmental compound intended for oral care and confectionary applications also needs to be soluble in mint oil, which is often used as a solvent for additional cooling agents. "It is necessary to find the right solubility window that matches both application and profile requirements," Furrer explained.

"While the temporal profile of a cooling agent is mainly determined by its physicochemical properties, the potency is more determined by the chemical structure," Furrer continued. By using X-ray crystal data to compare active and inactive compounds, the Givaudan team homed in on a model of the ideal structure for an effective cooling agent. Furrer borrowed this "pharmacophore" approach—which was developed by molecular modelers primarily to study pharmaceutical compounds—and applied it to flavor research. The technique is used to describe a molecule in terms of the hydrogen-donor and -acceptor strength of its polar regions, the size of its aliphatic and aromatic regions, and the relative spatial orientation of these different sectors.

As Givaudan continued its developmental program, the method helped the company refine the nature of its synthetic targets. "By dividing the molecular structure into different moieties, we were able to identify what molecular and structural features are needed for activity and their relative spatial distribution, and come up with a hypothesis about what the pharmacophore would look like for an effective cooling agent," Furrer said.

FURRER'S TEAM also studied the influence of stereochemistry on the activity of menthane carboxamides. The Givaudan scientists compared the cooling activity of isomers whose configuration matched that of L-menthol with isomers in which the configuration of the ring carbon next to the carbonyl was altered. Compared with the original isomers, these so-called neoisomers were considerably less potent and in some cases had no detectable activity at all. "This shows that stereospecific synthesis is crucial for ensuring good activity in the menthane carboxamide family," Furrer said. Furthermore, he added, "the effect on activity is far more significant than is observed with menthol."

All of this hard work by Givaudan's interdisciplinary team ultimately paid off in terms of long-lasting and potent new compounds. "If you use a toothpaste with some of our cooling agents, you'll feel a cool sensation for three hours," Daniher told C&EN. "There's nothing else in the world that's even close to that." Because the compounds are more potent than current products, "you can use a lot less and get the same results," he added. Givaudan plans to commercialize the first of these menthane carboxamide compounds, dubbed Evercool 180, during the fourth quarter of this year.

The cooling-agent project is an example of Givaudan's adaptation of pharma-type development methods to identify high-impact flavoring materials, Daniher noted. "Now, we have several other projects that are coming along using similar platforms to get to new flavor ingredients for different taste sensations."

Persistent Pollutants
US FDA sets voluntary arsenic limit in infant rice cereal
Persistent Pollutants
Goodbye to some PFAS in food packaging
Pollution
Satellites can now see air pollution inequality within cities
Share X
To send an e-mail to multiple recipients, separate e-mail addresses with a comma, semicolon, or both.
Title: Better Than Mint
Author: Sophie L. Rovner
Chemical & Engineering News will not share your email address with any other person or company.