Clues At The Scene Of The Crime 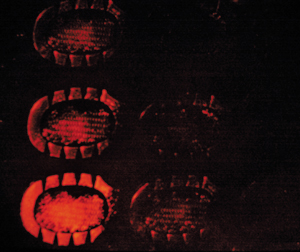 Clues At The Scene Of The Crime

Appearing at crime scenes with data collection tools in hand, good-looking investigators on "CSI: Crime Scene Investigation" and related shows never miss a clue. With ease and style, they quickly spot out-of-place fibers, specks of suspicious powders, faint bloodstains and fingerprints, and whisk the samples back to the labs for analysis.

In no time, these smooth operators interrogate the materials collected at the crime scene with the latest microscopy and spectroscopy tools. And then, before the next commercial break or certainly before the episode ends, the agents identify the case-solving substance and come up with three-dimensional molecular structures of the material, not to mention the name and photograph of the crime's perpetrator.

To help speed things up and otherwise increase investigators' ability to secure key forensic evidence, scientists seek to improve methods for collecting and analyzing crime scene samples. A number of scientists from academia and law enforcement agencies discussed their latest efforts earlier this month at a forensics symposium at Pittcon in New Orleans.

As attendees filed into the session, they inadvertently transferred microscopic fibers from the hallway carpeting, their hotel rooms, and their clothing to the symposium room. And as they moved about the room greeting colleagues and settling into their seats, they unintentionally picked up fibers from the room and their friends, and they eventually carried those tiny fibers elsewhere.

THAT TYPE of material transfer between two things that come in contact is at the heart of forensics trace analysis, explained JoAnn Buscaglia, a research scientist at the Federal Bureau of Investigation Laboratory in Quantico, Va. She noted that material transfer as a result of contact, which is known as the Locard exchange principle and is attributed to the French forensic scientist Edmond Locard, isn't limited to the exchange of fibers. Perpetrators readily deposit telltale human and pet hair, blood and fingerprint residues, and other types of materials at a crime scene. And unwittingly, they collect those same types of materials from the vicinity of a crime or from the victim and carry them away when they leave the scene.

Chemist Stephen L. Morgan of the University of South Carolina, Columbia, pointed out that exactly that type of fiber and hair transfer helped convict Wayne Williams in the early 1980s of a string of murders carried out in Atlanta. In that case, various types of fibers and hair collected from Williams' home, pet, and automobile carpeting were judged to be "consistent" with fibers found on the victims.

Analyzing fibers from crime scenes isn't new, but Morgan and coworkers are trying to push the capabilities of fiber analysis to give forensic examiners the ability to discriminate between fibers that may not yield to other types of analyses. His latest efforts focus on extracting and analyzing fiber dyes.

According to Morgan, experienced fiber examiners can typically distinguish between fibers made from cotton and acrylic, for example, on the basis of the fibers' characteristic shapes and appearances, simply by examining the fibers with an ordinary optical microscope. Polarized light microscopy can often be used to differentiate among nylon, polyester, and other polymers by comparing the materials' refractive indexes.

To further distinguish among various types of fibers, specialists sometimes use other methods, such as ultraviolet-visible microspectrophotometry and infrared spectroscopy. In some cases, however, even with these types of analyses, examiners may be unable to determine, for example, whether two similar-looking blue nylon fibers come from the same source. Typically, commercial textiles are dyed with a mixture of materials. The composition of the mixtures differs from manufacturer to manufacturer and could be exploited to distinguish similar dyes. But dye formulations are difficult to analyze spectroscopically. 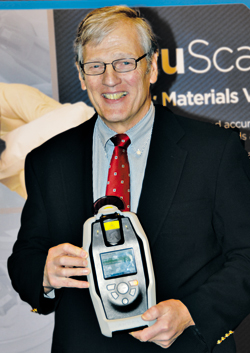 So Morgan's research group has developed a microscale procedure through which picogram quantities of materials used to dye acrylic, cotton, nylon, and polyester fibers are extracted, separated into their components, and then analyzed via capillary electrophoresis-mass spectrometry. A limitation of the CE-MS method is that it destroys the sample; however, it can be used to analyze minuscule fibers measuring just 1-2 mm in length and 15 μm in diameter. Morgan reported that the technique has been used to generate diagnostic "fingerprints" of numerous test samples but has not yet been put through the paces in real forensics cases.

BEFORE RETIRING from the FBI, Edward G. Bartick worked plenty of forensics cases. These days, he directs the Forensic Science Program at Suffolk University, Boston, where his law enforcement background shapes the way he conducts research. As a case in point, Bartick recently evaluated Ahura Scientific's handheld Raman spectrometer to determine not just the instrument's analytical capabilities but, "more important, its limitations." A handheld analytical device could be ideal for analyzing suspicious materials in bombings and illicit drug cases, he said. But first, the validity and reliability of new analytical tools and methods need to be tested rigorously so that the results will stand up in court.

After conducting systematic tests identifying a variety of polymers and explosives, Bartick concluded that the instrument performed admirably when used properly. For example, by comparing measured spectra with data in a built-in library, the Ahura spectrometer correctly identified most pure polymers and explosives. In many cases, it differentiated among copolymers and mixtures with similar compositions. Bartick and coworkers obtained those results when working in indoor lighting and indirect outdoor lighting. Direct sunlight, however, typically causes a strong interference similar to fluorescence, which often masks the analytical signal and prevents correct sample identification.

Fluorescence tends not to bother Gabor Patonay. Rather it forms the basis of a method he developed with Lucjan Strekowski and Maged M. Henary at Georgia State University, Atlanta, to make invisible bloodstains boldly stand out.

Crime scene investigators widely use fluorescein-type dyes to search for trace residues of blood. A reaction between the dye molecule and blood or other biomaterials oxidizes the dye to a fluorescent form, which then shows its colors when irradiated with a suitable light source. Although such methods are used by many law enforcement agencies, they have drawbacks, Patonay noted. For example, the dye solution has a short shelf life and needs to be prepared on-site. And after spraying the solution at the crime scene, investigators have just a short period of time to study and photograph the prints before they are buried in the growing background fluorescence.

To sidestep these problems and others, Patonay and coworkers reformulated the fluorescein dye solution. In contrast to the conventional aqueous alkaline medium, the team developed an acidic alcohol-based dye solution that has a long shelf life. As Patonay explained, rapid evaporation of the alcohol freezes the dye chemistry in place and thereby leads to high-contrast fluorescent prints that remain bold and easily distinguishable from the surrounding area for hours. Patonay noted that the novel dye solution, which is available as a forensics kit from his company KPS Technologies, can also be used to locate nonbloody fingerprints and minuscule quantities of other biomaterials left behind at crime scenes.

With vast audiences captivated by exciting forensic science as depicted on "CSI," its spin-offs, and other shows with related themes, today's college students who might otherwise have never thought about studying science might be inclined to take a course or two in chemistry. Nice hypothesis, but can it be true?

"Definitely," Patonay said. "In the past few years, I've certainly noticed an increased interest in forensics especially among undergrads." Some of them even directly acknowledge the role played by the TV programs in raising their interest, he said.

College students don't have a monopoly on enthusiasm for forensics, Morgan stressed. "The general populace has a heightened interest in science." That's not surprising given that these kinds of shows portray science in a positive light, he added.

One downside to the flattering attention, in Morgan's view, is that people now expect that analytical chemists can solve crimes and other complex problems during a three-minute commercial break, just as they do on TV.

Real chemists can't always come up with solutions quite that fast. But they're working on it.

Analytical Chemistry
Luminescent nanoparticles leave a glowing fingerprint
Analytical Chemistry
Could crime scene bloodstains reveal a person’s age and the time of the crime?
Analytical Chemistry
Fine Art Travel Insurance
Share X
To send an e-mail to multiple recipients, separate e-mail addresses with a comma, semicolon, or both.
Title: Clues At The Scene Of The Crime
Author: Mitch Jacoby
Chemical & Engineering News will not share your email address with any other person or company.