Digging Beneath The Martian Surface

Extraterrestrial Chemistry
[+]Enlarge
Credit: NASA/JPL-Caltech/UA
Each of the four cells in the Phoenix spacecraft's wet chemistry instrument can perform experiments on a single sample of martian soil. The cells contain electrochemical sensors that will test pH and detect ions and metals. 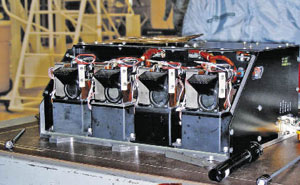 Credit: NASA/JPL-Caltech/UA
Each of the four cells in the Phoenix spacecraft's wet chemistry instrument can perform experiments on a single sample of martian soil. The cells contain electrochemical sensors that will test pH and detect ions and metals.

Humans have become extremely adept at building spacecraft that can analyze alien environments millions of miles away under extreme conditions, from the Mars Exploration Rovers, which scraped and analyzed rocks on the red planet, to the Cassini spacecraft's Huygens probe that sniffed the atmosphere on Saturn's moon Titan.

Now, scientists are eagerly anticipating an even greater feat of distant intimacy: the first wet chemistry experiments on another planet. The Phoenix spacecraft, the result of collaboration between the Lunar & Planetary Laboratory at the University of Arizona, Tucson, and the National Aeronautics & Space Administration, is scheduled to land on Mars on May 25, after a nine-month journey to the planet.

The craft's payload includes four sensor-laden, beakerlike cells, each ready to receive, dissolve, and test a single soil sample, freshly dug by the craft's robotic arm—four shots at a discovery as potentially momentous as finding the first signs of extraterrestrial life. But whatever these experiments detect—perhaps ions such as nitrate or chloride or metals such as lead and copper—will help answer questions about Mars's watery past and the planet's potential to host life. With the launch included, the cost of the mission will approach $460 million.

The wet chemistry modules have endured rigorous testing to ensure that they will not only land and perform in Mars's extreme environment but also withstand the damaging radiation and very low temperatures that they will experience during space travel.

"My students have had fun monitoring the temperature of the chemistry cells during the cruise" to Mars, says Samuel P. Kounaves, a chemistry professor at Tufts University in Medford, Mass., and a co-investigator of the Phoenix mission. "They are now at a cool -31 °C." 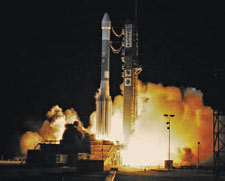 Credit: NASA/Sandra Joseph And John Kechele
The Phoenix spacecraft was launched from a Delta II rocket at Cape Canaveral Air Force Station, in Florida, in August 2007.

The wet chemistry lab is part of a suite of instruments known collectively as the microscopy, electrochemistry, and conductivity analyzer (MECA). Built by the Jet Propulsion Laboratory, MECA also contains an atomic force microscope that will be used to look for clays—a possible sign of a past wet environment. Phoenix also carries a mass spectrometer to look for organics and analyze isotopic ratios of elements such as oxygen and nitrogen, the values of which may or may not have been influenced by biological processes.

The lander will touch down on a flat plain near Mars's north pole, where NASA's Mars Odyssey recently detected a trove of subsurface water ice. If life indeed exists or ever existed on Mars, chemical clues would likely be found beneath the martian surface, where soil is protected from the sun's harsh radiation. If successful, the mission will be the first to dig into an extraterrestrial planet's surface.

Scientists hope the sophisticated instruments on Phoenix will paint a sharper picture of the martian environment than have NASA's two Viking landers, which explored Mars in the 1970s. The Viking landers analyzed soil samples with instruments such as a gas chromatograph/mass spectrometer for telltale signatures of life, such as organic molecules and microbe-produced gases such as methane. But those missions detected no such signs.

The Phoenix mission is relatively short: It's designed to last only 90 martian days, which are only slightly longer than Earth days. Other Mars craft have spent months and years on the planet, including the Mars rovers, which are still creaking along after two years. Phoenix will relay its information to the Mars Odyssey and Mars Reconnaissance Orbiter spacecraft that are currently orbiting Mars. They will then transmit the data back to Earth.

Extreme Chemists
[+]Enlarge
Credit: Amanda Yarnell/C&EN
Kounaves (from left), research associate Suzanne Young, and chemistry student Casey Cable pose in front of their lab's Mars Environmental Simulation Chamber, which simulates conditions on Mars. They used the chamber to test the performance of instruments aboard the Phoenix. 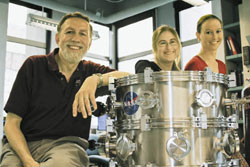 Credit: Amanda Yarnell/C&EN
Kounaves (from left), research associate Suzanne Young, and chemistry student Casey Cable pose in front of their lab's Mars Environmental Simulation Chamber, which simulates conditions on Mars. They used the chamber to test the performance of instruments aboard the Phoenix.

Phoenix is a revamped version of the 2001 Mars Global Surveyor, a lander that never made it to launch. That program was scuttled after NASA's Mars Polar Lander presumably crashed to the martian surface in 1999.

Another NASA rover in the works, the Mars Science Laboratory, will begin exploring the planet's equatorial regions, which will have different environments than the polar regions, in 2010. "If we find something of great scientific interest in the polar regions, then I would expect that NASA would want to return to follow up on the discoveries," says Peter H. Smith of the University of Arizona, Tucson, principal investigator for the Phoenix mission.

Phoenix is the first of NASA's planned series of relatively low-cost Mars Scout missions, as the agency prepares for eventual human exploration of the planet.

The stakes are high. The Phoenix craft is haunted by the legacy of a number of other dramatic Mars mission failures. In addition to the loss of the Mars Polar Lander, NASA's Mars Observer presumably exploded as it went into orbit around Mars in 1992, and Mars Climate Orbiter is believed to have crashed to the surface in 1998 after a navigation error.

Using images from the Mars Reconnaissance Orbiter, scientists have been meticulously scanning the surface for an ideal landing spot. One ill-placed rock could upset the craft's landing and put the kibosh on the mission.

With that pressure, the Phoenix team admits to more than a little nail-biting. "There is a solemn unspoken fear that unknown faults may cause a catastrophic failure," Smith tells C&EN. "Landing will be scary."

Find a kid-friendly podcast about the Phoenix mission to Mars at ACS's ByteSize Science, www.acs.org/BytesizeScience.