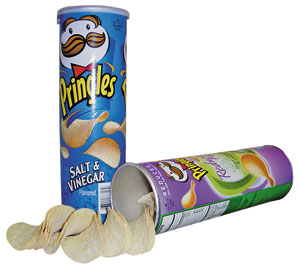 This is the story about a chemist proud of his accomplishments. If you are a potato-chip fanatic, Fredric J. Baur and his invention have undoubtedly affected your life in a positive manner.

Never heard of him? Let’s fix that.

Patented in 1970, the can is what saddle-shaped Pringles are best known for. The iconic packaging has remained untouched for more than 30 years, save for a few size adjustments and logo redesigns.

The retired organic chemist was so pleased with his invention that upon his death he asked his family to place his ashes in it. Some of his remains were buried in a Pringles can, along with a standard urn containing more of his ashes, in his final resting place in Cincinnati.

Baur was born on July 14, 1918, in Toledo, Ohio, and received both a master’s and a Ph.D. in organic chemistry from Ohio State University. In the late 1940s, he began working for Procter & Gamble as a food storage technician specializing in research and development and quality control.

As a tribute to the chemist turned inventor, the blog "Serious Eats" has posted a collection of throwback Pringles commercials from the 1970s and '80s. One totally awesome spot, at least to some of us potato "chip lovers" features a very young Brad Pitt in surfer gear devouring some chips next to a neon yellow car (youtube.com/watch?v=mucuLrWHGqc).

Originally known as “Pringle’s Newfangled Potato Chips,” P&G chose the Pringles brand name by flipping through an Ohio phonebook and randomly spotting “Pringle Avenue,” grabbing on to it due to its “pleasing sound,” states the company’s website.

Other innovators have found that the container has different functions besides serving as a burial urn and potato-chip holder. It can also be used to make a cheap, makeshift Wi-Fi antenna called a cantenna. In 2001, a writer for the "O'Reilly Wireless Devcenter" blog successfully made an antenna from a Pringles can that pulled in a usable wireless Internet signal for $6.45 worth of materials. To view the full instructions—including photos and a shopping list—go to oreillynet.com/etel/blog/2001/07/antenna_on_the_cheap_er_chip.html. 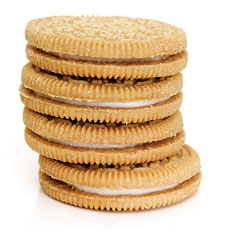 Packaging isn't the only secret to winning in the snack market. The Journal of Consumer Research (DOI: 10.1086/587626) reports that thinking about death makes consumers with LOW SELF-ESTEEM overeat.

Social psychologists Naomi Mandel and Dirk Smeesters, respectively of Arizona State University, Tempe, and Erasmus University, came to this conclusion through a series of four experiments involving hundreds of students. In one experiment 392 students wrote an essay about either death or going to the dentist. They then filled out questionnaires about self-esteem and hypothetical shopping.

In another experiment 103 students were asked to write about death or pain and also filled out questionnaires about their self-esteem. These students were then given as many cookies as they wished in a purported taste test.

In the experiments individuals with low self-esteem who wrote about death chose more food on the hypothetical shopping list or ate more cookies. The psychologists speculate that people with low self-esteem turn to food and snacks to escape their own self-awareness, which is heightened by thoughts of their own inevitable mortality. It’s hard to put that in a Pringles can.

This week's column was written by Faith Hayden. Please send comments and suggestions to newscripts@acs.org.

Education
New international students cannot enter US for online-only programs
Education
Chemistry-style fun and games
Undergraduate Education
Block plan compresses one class into a few weeks for deeper learning
Share X
To send an e-mail to multiple recipients, separate e-mail addresses with a comma, semicolon, or both.
Title: Newscripts
Author: Faith Hayden
Chemical & Engineering News will not share your email address with any other person or company.