Cooking and comedy combine for some sweet results

by Corinne A. Marasco 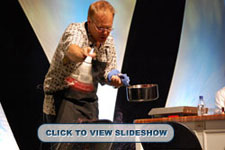 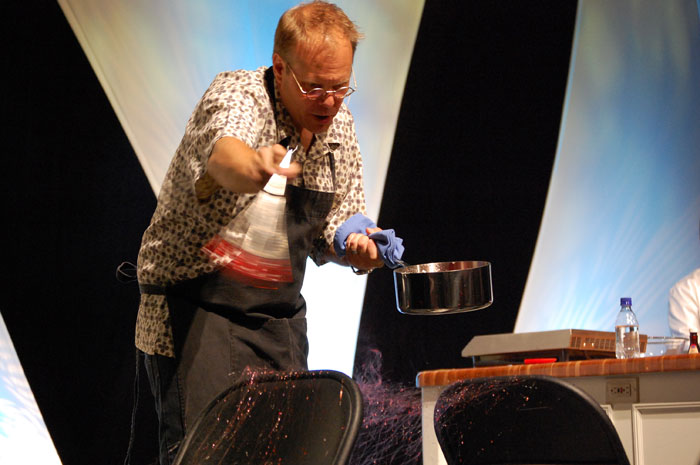 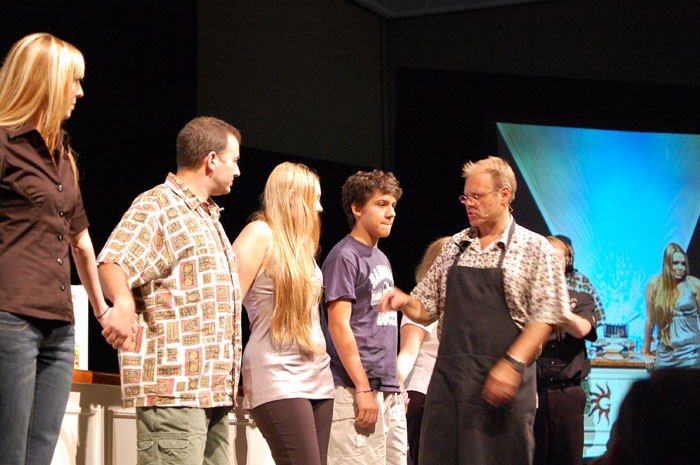 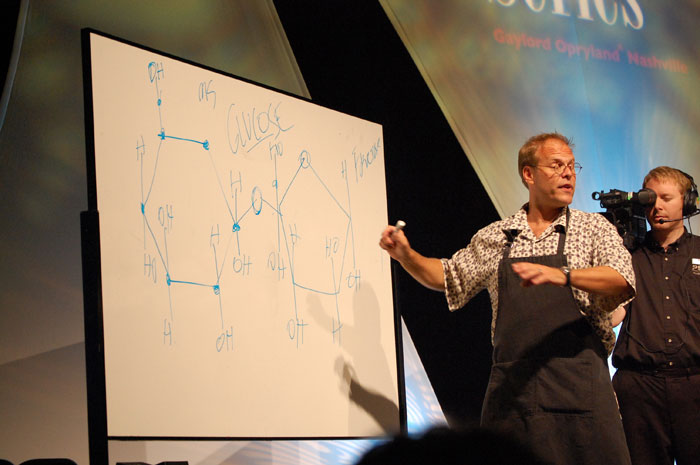 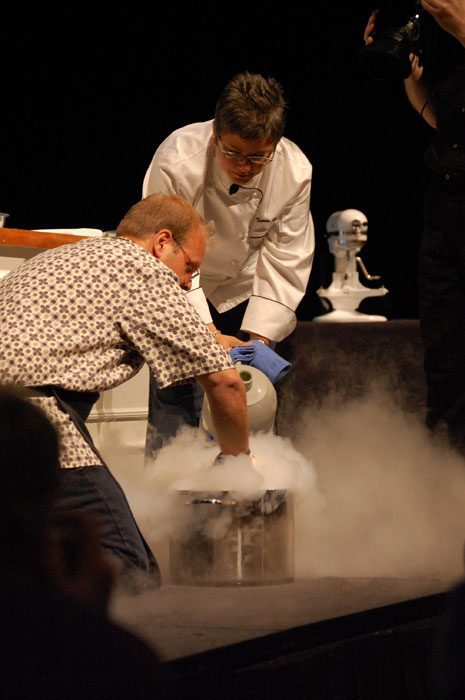 It was the kind of gathering usually reserved for a red carpet premiere. As the time approached 1:30 PM, people streamed into the hall. Some carried books, while others sported T-shirts that read, “Science—it’s what’s for dinner.” I overheard one young woman say she would jump over anyone and everyone to have her book signed. People of all ages came from as faraway as Michigan and upstate New York. As the crowd size increased, so did the excitement.

We were at the Gaylord Opryland Resort & Convention Center in Nashville on a hot Saturday in August 2007, attending a demonstration by Food Network host Alton Brown. Brown’s show “Good Eats” fuses history, culture, humor, science, and groovy props into a 30-minute cooking show. Brown is not just the star; he has been the writer and producer since the first episode, “Steak Your Claim,” aired in 1999.

Any questions about Brown’s popularity and credibility can be quickly laid to rest: He entered to a standing ovation from the roughly 1,000 attendees. For the next couple of hours, we were treated to a cross between a cooking class and improvisational stand-up comedy. Joining him onstage was his assistant Tamie Cook, the culinary director of “Good Eats.”

By way of introduction, Brown said he used his cooking skills, which he learned from his mother and grandmother, primarily as a way to get dates in college. These days, he’s “still trying to please women,” only now it’s his young daughter, Zoey.

It didn’t take long to get right into the science of sugar, however, as Brown embarked on a discussion of candy making. Both kinds of candy, chocolate- and sugar-based confections, involve managing sugar to control texture. Candy can vary from creamy to chewy to brittle, depending on the parameters used.

On a nearby whiteboard, Brown drew a glucose molecule (with a little help from the crib notes on his palm), a monosaccharide that acts as the body’s primary source of fuel. Then he drew a fructose molecule, another monosaccharide that is abundant in fruit and honey and is found in a lot of fruit drinks. Unlike glucose, fructose is extremely sweet, especially when cold. With a final flourish, Brown drew bonds between the two structures, making sucrose, “which is a what?” he asked. “Disaccharide” was the response from the audience member next to me.

Mr. Disaccharide’s real identity is Steve from Detroit. He’s a member of the Good Eats Fan Page (GEFP) message board where fans gather online to chat about Brown, the show, and other food-related topics. Like followers of the Grateful Dead, some GEFP members have attended Brown’s demos in other cities. These devotees call themselves “briners” because Brown is a fan of brining. Brining is a flavor-enhancing technique, in which lean meats such as poultry and pork are soaked in brine, typically a solution of salt and water, which helps keep the meat moist as it cooks.

“Everything about candy making is controlling crystals,” particularly their sizes and shapes, Brown said. The audience shouted out examples of every candy from fudge to taffy—but they are all made from sugar and water. Crystal control, the audience learned, can be achieved by adjusting the mixture’s temperature, water content, agitation (stirring), and other added ingredients.

The unifying theme of the day’s demonstrations—the effect of temperature on crystals in the kitchen—was illustrated by combining sugar with various ingredients and heating the mixture to different temperatures with some delicious results.

In pan A, Brown combined sugar, corn syrup, water, and salt (which makes flavors more complex) and left it to boil on an induction burner. Then he poured water over gelatin in a stand mixer and left it to soften. In culinary vernacular, this is called “blooming.” In pan B, he combined sugar, water, and corn syrup along with some red food coloring and put it to boil on another burner.

Brown likes to use analogies and metaphors to communicate his scientific points. He brought some volunteers up on stage and had them join hands to create a starch molecule. “Starch is just a long string of linked glucose molecules,” he said, and then directed the volunteers to break up into groups of two or three. “Processing the corn starch with enzymes and heat breaks down the long starch chains into smaller chains of glucose molecules,” he said. “A chain of two glucoses is maltose and treating it some more converts some of the glucose into fructose, and we have high-fructose corn syrup.” Because high-fructose corn syrup is primarily glucose and has a different molecular shape, it interferes with sugar (sucrose) crystallization.

When the mixture in pan A reached 240 °F on a candy thermometer, Brown poured it into the mixer and turned it on for about 15 minutes. At that point he added vanilla, noting that if it went into the mixture as it was cooking, the alcohol, which boils at 173 °F, would have evaporated.

He turned his attention to pan B, noting the temperature needed to reach about 300 °F. If the temperature had gone any higher, the mixture would have turned into caramel.

Taking a whisk with the ends cut off, he dipped it in the pan, and whipped the syrup back and forth across the backs of two folding chairs set on newspaper. Barely visible threads spun off the ends of the whisk. Originally called “fairy floss” when it was introduced at the 1904 World’s Fair in St. Louis, we know this substance as cotton candy today.

And the concoction in the mixer? Brown poured it into a pan that had been greased and dusted with flour and confectioner’s sugar. Then, as seen on TV, he swapped it out for a pan that had already set. And voilà! Marshmallows.

At this point, we had seen two examples of how heat is used to control sugar crystallization. What we were to witness next was even better.

In pan C, Brown combined half-and-half, whipping cream, sugar, and a split vanilla bean. Milk sugar (lactose) is not as soluble as sucrose. If there is too much lactose in ice cream, it will crystallize and the ice cream will taste gritty. The high fat content in cream helps to limit crystal size and the lower amount of lactose inhibits grittiness. This would become the base for what Brown called “the richest ice cream on Earth.”

Once the mixture reached 170 °F on a candy thermometer, it should have been chilled overnight in the refrigerator. Overnight chilling ensures that the ice cream will be smooth-bodied and the crystals will be fine in texture. The amount of fat and sugar in Brown’s mixture was too high for a standard ice cream maker, however, so he dumped the mixture into a pot and dropped it onto the stage. Out came the liquid nitrogen. Cheers erupted.

“We’re not having fun with chemicals,” he scolded, “we’re controlling crystals with temperature.” Brown advised those “sitting in the poncho seats” in front of the stage to move a bit, and Tamie poured about a quart of liquid nitrogen into the pot. More cheers erupted as the cloudy vapor rose.

“I’d say don’t do this at home,” Brown said, “but some of you will, so don’t be stupid.” As a visual warning, he stuck his head inside the pot. “You can suffocate,” he said. Liquid nitrogen expands quickly into gas that can displace the breathable air. He wore gloves to protect his hands from a freezing burn.

Using a little elbow grease to mix the base, Brown produced a decent soft serve ice cream in the end. To have a little more fun with the leftover liquid nitrogen—“it’s not like we can take it back on the plane”—he poured some onto a marshmallow and ate it.

Although the audience was encouraged to shout out questions throughout the demonstration, Brown hosted a lively Q&A afterwards. The program was officially an hour and a half, yet he answered questions for at least an extra half-hour, tossing out an occasional zinger. For example, when a young woman asked if he had any plans to do a vegan show, Brown replied, “Sure. When I can grill up a few, I’ll do it.”

One questioner asked for more information about stevia, an herb about 300 times sweeter than sugar that has a negligible effect on blood glucose, which means diabetics can eat it. It is widely used as a sweetener in Japan, and it is now available in the U.S. and Canada as a dietary supplement, although not as a food additive. Coca-Cola and Cargill are working jointly to develop a stevia-derived sweetener.

What is sushi rice? “It’s a very glutinous rice so when cooked, it’s much stickier than regular rice.” Why can’t you eat refrigerated rice? “Rice gets hard when it cools because the starch molecules go back to their crystal form.” This process is called retrogradation.

Clearly, he had rocked the house. As he said earlier, “Cooking was always fun. I just pointed it out.” Point taken.

More On This Topic

Materials
Chemistry in Pictures: Psychedelic spirits
Food Science
What’s ice cream, and why do we scream for it?
Process Chemistry
Helium Beer, From Prank To Tank
Share X
To send an e-mail to multiple recipients, separate e-mail addresses with a comma, semicolon, or both.
Title: Sugar-Coated Science
Author: Corinne A. Marasco
Chemical & Engineering News will not share your email address with any other person or company.