Conference uses science to build bridges in the region 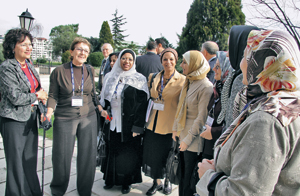 IT'S NOT OFTEN you overhear a conversation at a research conference that ends with, "I really hope we can collaborate, but tell me, will you suffer any [political] problems if I call you in your office next week?"

The question, posed by an Israeli to an Egyptian, reveals some of the operational difficulties faced by researchers in the Middle East. It also highlights the value of getting Middle Eastern researchers together in a neutral place to talk science.

"Frontiers of Chemical Sciences III: Research & Education in the Middle East," was the conference and Istanbul, Turkey, was the place. The meeting, held last month, was the third in a series of conferences with the aim of engendering goodwill and collaboration among Middle Eastern scientists that might filter back to the politicians, said organizer Zafra M. Lerman, an Israeli-born chemist and head of the Science Institute at Columbia College Chicago.

"Far away from Middle Eastern politics, you will find the people who can live together, eat together, and discuss science together," said Yousef Abu-Mayla, director of the Water Research Center at Al-Azhar University, in the Gaza Strip. "At this conference I can say, 'Here is my work, what do you think,' regardless of the citizenship."

The idea is to meet on middle ground so that researchers, who might not be able to do so ordinarily, can discuss regional research and environmental issues. Plenary lectures given by six Nobel Laureates provide an added pull to the conference for delegates.

This year, Iraqi scientists joined delegates from Bahrain, Egypt, Iran, Israel, Jordan, Kuwait, Lebanon, the Palestinian Authority, Qatar, Saudi Arabia, Turkey, and the United Arab Emirates. Also attending was a sprinkling of delegates from Europe and North America, mostly from organizations that sponsored the conference, such as the American Chemical Society; the Royal Society of Chemistry; Columbia College Chicago, and the United Nations Educational, Scientific & Cultural Organization to name a few.

"Trust is needed to solve many of the problems in this region," said Henning Hopf, vice president of the German Chemical Society, one of the sponsors. "But trust can be developed only if you really look into each other's eyes. And that's the benefit of this conference."

This sentiment echoes that of Mohammad El-Khateeb, a chemist at Jordan University of Science & Technology, in Irbid. "I'm here at Malta III," he said, "to get to know all the people."

The idea was to "keep the conference small and intimate so that people can really get to know each other," Lerman said. Events like Middle Eastern music and dance evening, for which Hoffmann was the DJ, furthered that goal, one shimmy or foot-tap at a time.

When delegates weren't listening to music, water quality and quantity issues took a leading role in conference discussions. "We share the same air and water," said Abdullah Al-Zoubi, dean of scientific research faculty at Al-Balqa' Applied University in Salt, Jordan. "So no one country can solve environmental problems without the others."

Al-Zoubi gave a chilling account of the water drop in the Dead Sea, which is part of the Dead Sea-Jordan Rift Valley and borders Israel, Jordan, and the Palestinian Authority. The Dead Sea has experienced an average drop of 0.9 meter per year over the past two decades. Culprits include the culling of freshwater from the rivers that feed in to the Dead Sea for irrigation and drinking, as well as heavy mining, in which seawater is artificially evaporated to extract valuable minerals.

But it was a presentation by Abu-Mayla about declining drinking water quality in the Gaza Strip that elicited the strongest reaction from delegates. He reported results that drinking water obtained from groundwater wells in several Gaza Strip communities is contaminated with higher levels of lead, nitrate, and chloride than previously thought. Levels of these contaminants are many times higher than international standards. Because the Gaza communities rely entirely on the well water, the contamination could exacerbate community health problems, Abu-Mayla cautioned.

Nitrate contamination from agricultural runoff, for example, has been linked with incidences of renal failure and "blue babies," infants who suffer from methemoglobinemia, a condition that leads to blue-gray skin, coma, and sometimes death.

"We are listening to not a lecture but a tragedy, a human tragedy," commented Hasan Dweik, a polymer chemist and executive vice president of Al-Quds University, in Jerusalem.

Abu-Mayla's data inspired the creation and adoption of a conference-wide communiqué aimed at international organizations and governments.

"There are some concerns that transcend politics," the communiqué reads. "Water in the Gaza Strip is of particular concern in terms of quality and quantity.

"We urge that the interested governments and agencies ignore their current disagreements and, by drawing on scientific expertise, urgently address the issue of water in the Gaza Strip."

IN ADDITION to water resource issues, a wide variety of regional science was discussed, from biomineralization and nanofabrication to new sources of alternative energy.

Nasrin Moazami, director of the Institute of Advanced Technology in Tehran, Iran, reported how she's put microscopic algae isolated from the Persian Gulf to work as biological fuel factories. The bugs use sunlight to convert CO2 into complex oils at high yield that are then processed to make biodiesel. "Microalgae, which billions of years ago helped create the environmental conditions necessary for the formation of hydrocarbons consumed today, will be useful to us a second time," she noted. 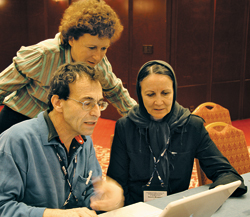 In a nanotechnology symposium, Mukhles Sowwan, who founded the first nanotechnology center in East Jerusalem and the West Bank at Al-Quds University, reported on his work to interlace proteins, gold nanoparticles, and DNA together to form larger ordered structures like nanowires.

Whereas Sowwan described his engineering of ordered nanostructures, Lia Addadi, a biochemist from Weizmann Institute of Science in Rehovot, Israel, reported her work to explain how nature builds bone from nanometer-sized calcium phosphate crystals and collagen protein fibrils.

Between sessions, much discussion went on about how the region's scientists might collaborate. For example, a natural products chemist from Bahrain got offers from potential collaborators who were willing to synthesize a molecule with muscle relaxant properties that he's isolated from a palm tree. An Iranian scientist offered to screen oxindole derivates produced by an Egyptian lab for biological activity.

One ongoing collaboration between Jordanian scientist Al-Zoubi and Israel's Miriam Waldman, an environmental policy consultant and former official in the Israeli Ministry of Science, gave participants a model for successful regional collaboration. Al-Zoubi and Waldman have been involved for several years in multilateral projects to coordinate sustainable water management in Israel, Jordan, and Palestine, supported by the German Ministry of Science & Education. Al-Zoubi and Waldman are also involved in a project to survey the region's unique geology. The latter project uses Jordanian military helicopters that receive permission to cross into Israeli airspace every 15 minutes, an endeavor made possible by the Jordan-Israel peace accord in 1994.

Unfortunately, some postconference scientific exchange is seriously stymied by politics. For example, Iranians and Israelis have a tough time getting visas or traveling to other Middle Eastern countries.

Academic politics also poses problems. At the first Malta Conference in 2003, Yitzhak Apeloig, a chemistry professor and president of Technion-Israel Institute of Technology, Haifa-offered graduate scholarships for Arabs to attend Technion. No one has taken him up on this offer, likely because "people spending too much time in Israel may suffer when they return to their home country," he noted. Discussions with several Arab delegates confirmed this. They reported that some in the region think scientific alliances—even visits or phone calls—indicate political alliances. "About half my colleagues in my department are not as open-minded as I am," one Arab academic said. "Going to Israel for a long period of time could cause problems. Some people feel it's not worth it."

"This is why we need to have the Malta Conferences in a neutral place," Lerman said. "Otherwise it is hard to get the people together."

"Something must happen to improve relations in the Middle East," added Peter W. Atkins, a physical chemist at Oxford University and one of the conference organizers. "Here we are adding one atom of 'happening' at a time. It is perhaps a small step, but a step forward nonetheless."

more on this topic

Outreach
Malta conferences use science diplomacy as a bridge to peace in the Middle East
Environment
A chain reaction for peace
Environment
Maltese Reflections
Share X
To send an e-mail to multiple recipients, separate e-mail addresses with a comma, semicolon, or both.
Title: Middle East Connections
Author: Sarah Everts
Chemical & Engineering News will not share your email address with any other person or company.