Working abroad is fraught with difficulties, but it is also rewarding 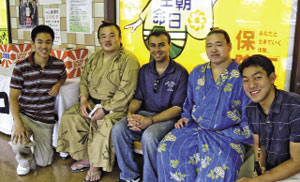 Credit: Courtesy of Benjamin Lu
While in Japan for their internships, Norman Pai (left), Shiv Gaglani (center), and Lu (right) took in one of Japan's traditional cultural experiences: sumo wrestling.

"There were a lot of things that were really shocking about my experience in Thailand," says Marguerite (Meg) Desko, who had an international research experience at Mahidol University in 2002. Many people who go abroad experience culture shock and not just while out in public. In Desko's lab, "it was the ambient temperature of the outdoors," which was about 90 ºF, she says. "We had to run a lot of columns using methylene chloride, but it evaporated and cracked our columns. So we had to spray down the outside of the column with methanol to keep it cool."

Because of the temperatures, Desko initially wore shorts. "They weren't short shorts," she says, but "I was just stared at; it's unacceptable for women in Thailand to wear shorts, so I decided to buy pants. I had so much trouble because everyone would say, 'No, too fat.' In Thailand, I'm huge, but in the U.S. I'm considered petite."

To adhere to another flustering fashion fad, Aanchal Raj, a participant in NanoJapan 2008 who is studying electrical and computer engineering at Carnegie Mellon University, says she tried "to assimilate to the culture of women riding bikes while wearing 3-inch heels." In Japan, she says, people are generally dressier than in the U.S.; it's part of their culture. Almost every woman wears big heels, and people use bikes a lot, she adds. "The women look like they're going to a party, but they're riding bikes to get there," she says. "I had to try it—it's not as difficult as it may seem, but I prefer my sneakers."

Raj also experienced her first earthquake while in Japan and several others after that. She knew earthquakes happened in Japan, she says, and she got used to them but was still scared. "I went to the beach one day, and there was an oceanside earthquake," Raj says. "They made us come out of the water for a possible tsunami. Everyone was just sitting around eating lunch, but there were helicopters and news crews." Even the Japanese friends she was with said they had never been to the beach during an earthquake, Raj relays. Although there was a slight decrease in water level, no tsunami hit the beach that day, she adds.

Benjamin Y. Lu, who is studying bioengineering at Rice University and was a NanoJapan 2008 participant, had a different kind of cultural difficulty in Japan. He had been to Japan several times before because he has family in Taiwan and Japan, so it was easy for him to adapt to life in Japan, he says. "But it was difficult for me to tell people that I don't speak Japanese that well. People assumed I did," Lu says. Although he was familiar with Japanese culture before the NanoJapan program, Lu had never been in Japan by himself and says he really enjoyed the cultural opportunities he was able to experience. "I went to a sumo wrestling tournament," he says. "It was a lot of fun."

At the end of the internships, the NanoJapan students climb Mount Fuji together as "a metaphor of 'I survived—I did this,' " says University of Tulsa's Cheryl A. Matherly, who is involved in running the program. "It's quite exciting to see students who, at the beginning of the summer, were having difficulty finding their way around the subway" finish climbing Mount Fuji by the end of the internship.

Despite the rain and cold they experienced while climbing Mount Fuji, some students said the ascent was the defining moment of their lives so far, Lu says. The students climbed the mountain at night to watch the sun rise the day before leaving Japan. "It was an unforgettable experience, seeing the sun come up above the clouds," Lu relates.

Solongo H. Wilson, who participated in the German Academic Exchange Service's Research Internships in Science & Engineering Professional program in 2007 and started a full-time contract position at her internship placement company, Hydac International, in Sulzbach, says: "The stereotypes of Germans as unfriendly and harsh couldn't be further from the truth. The culture is easy to adapt to, and the people are friendly and helpful. People want you to be comfortable."

There are, however, some differences that are difficult to get used to. Grocery stores don't have baggers, Wilson says, "and if you don't pack your bags quickly enough, you get mean looks." Also, Germans are energy conscious, she says. "People freak out if you idle your car, leave a light on, or leave water on while washing dishes." The people care about recycling and the environment, she adds.

The hardest thing to adjust to when she returns from Germany, Wilson says, will be going from six weeks of vacation per year to only two weeks.

Sarah R. Phillips, who is involved in running the NanoJapan program, says, "Reentry culture shock occurs for almost everyone who has spent a significant period of time outside of their home country." So much about the person has changed, she says, "but their family, friends, and everything back home really haven't. That can be a huge disconnect, and you reach a moment when it's difficult to convey all the changes you've gone through."

"It's a lot more interesting to be in" another country, Matherly says, "where everything is new and novel, rather than to be back in the U.S."

Desko agrees. "Something I discovered throughout my experiences in Thailand and grad school is that I'm not going to be satisfied in the lab all the time. I need more variety," she says. "Just living in Thailand gave me that variety every day."