Credit: John Bickham/Purdue U
This expensive bat, or a free molecule.

It's Dec. 22, so there's precious little time left for holiday shopping. In desperation, you could go for the mundane, such as a gift card or a pair of socks, or if you are feeling generous you could go with gold, frankincense, and myrrh (see page 38). But let's face it, during the current economic doldrums, you want to save money. Leave it to Newscripts to give you some instant gift ideas that won't cost much, if anything.

The first idea is inspired by Purdue University, which is auctioning the NAMING RIGHTS to a little yellow bat discovered by professor John W. Bickham, director of the university's Center for the Environment. The winning bidder earns their name, or that of a friend or loved one, a permanent place in history and gets to join Bickham on a future scientific research expedition. The catch, of course, is that Purdue expects a sizable donation in return.

Purdue's monetary initiative is not a new idea. People name flowers, stars, and the like after other people all the time. So the gift idea we put forth here is to name a new chemical, protein, or gene after your friend or family member. It's free, and it will be a source of never-ending pride for the recipient.

Once upon a time, chemicals were commonly named after people: For example, Glauber's salt is sodium sulfate and Wilkinson's catalyst is chlorotris(triphenylphosphine)rhodium(I). Standard nomenclature for chemicals, proteins, and genes is now necessary, but such nomenclature doesn't mean a lot to nonscientists.

Take a name like (5α)-cyclic-1,2-ethanediylacetal-8,14-didehydro4,5-epoxy-3-methoxy-17-methylmorphinan-6-one. It could instead be called "Jackie's ketal," if I were naming it for my wife. I can also imagine an enzyme called "Steverinoase," named after myself. 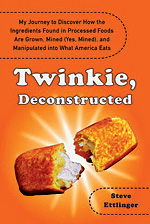 Books for the holidays.

The next gift idea is a PAIR OF FUN BOOKS that have chemical overtones. The first one, "Twinkie, Deconstructed," by Steve Ettlinger, takes a look at the ingredient list on a package of Twinkies, the cream-filled snack cakes. The book follows the food industry pipeline to track down where the ingredients originate and how they are processed. A Newsweek review said, "You will never read a label the same way again."

The second book is "Candyfreak: A Journey through the Chocolate Underbelly of America," by Steve Almond. This book is a "magical, sugar-fueled road trip" that the obsessive author takes to discover more about regional candy makers and their craft.

Because these books have been out awhile, you could buy a used copy online, get a copy at the public library, or borrow one from a friend. You might have to ask for the books back to return, but it's the gift-giving thought that counts.

Finally, we offer a gift idea based on the RENTAL INCOME SIMULATOR, which is part of the award-winning website run by Zilok, an online rental marketplace aimed at "a new, sustainable, and community-driven way of consuming." The company's premise is that, in the U.S., 80% of the objects we own are used less than once per month. Instead of letting stuff collect dust, you list your objects such as tools, electronics, and sports and camping equipment on the website and let locals rent them when needed. It's the renter's equivalent of eBay.

Now, the gift idea is that you could rent something for that special someone or make enough money renting your own junk to buy them a real gift. You use the simulator to see how much money you are going to make. A true entrepreneur might go around the lab and round up unused pieces of equipment such as glassware, rotary evaporators, and spectrometers that could be rented to other labs. The sky is the limit.