What To Do With Your Unused Pharmaceuticals 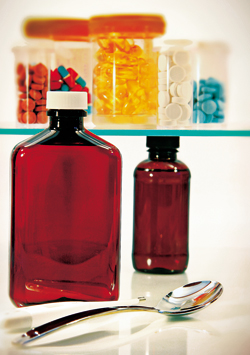 What To Do With Your Unused Pharmaceuticals

Open up any medicine cabinet and you'll probably see shelves crammed with expired and unused medications. The average American received more than 11 prescriptions in 2006, according to the Kaiser Family Foundation, adding up to 3.3 billion prescriptions total. And that doesn't even take into consideration all the nonprescription drugs we've got stockpiled in our cupboards.

No one knows just how many of those unwanted meds get flushed away each year, only to reemerge as trace contaminants in the environment. To get a handle on just how many unused pharmaceuticals go down the drain, scientists at the Environmental Protection Agency surveyed the drug inventory maintained by the Clark County coroner's office in Las Vegas.

"When coroners investigate a death, they take a detailed inventory of all the medications that are present, and then, as standard industry practice, they often dispose of them down the toilet," explains Christian G. Daughton, chief of the environmental chemistry branch at EPA's National Exposure Research Laboratory, who led the study for EPA. "We know exactly what active pharmaceutical ingredients were present and exactly what amounts were disposed of during a particular period of time. So we're able to calculate the minimum amounts that are being introduced to sewage and some very rough extrapolations can be made to the general population."

Daughton and collaborator Ilene S. Ruhoy found that during a 13-month period, the Clark County coroners flushed more than 325,000 doses of a wide array of drugs, representing roughly 225 lb of active pharmaceutical ingredients (APIs). Extrapolating from that data, Daughton and Ruhoy estimate that orphaned medications from the deceased population alone account for as many as 19.7 tons of APIs disposed into U.S. sewage systems annually (Sci. Total. Environ. 2007, 388, 137).

Getting people to stop flushing away their unwanted medication is one easy way to cut down on pharmaceutical pollution. So last year, the Office of National Drug Control Policy (ONDCP) issued new federal guidelines for the proper disposal of prescription drugs. According to the guidelines, unused, unneeded, or expired prescription drugs should be removed from their original containers and thrown in the trash.

To prevent accidental poisonings or potential drug abuse, ONDCP recommends mixing meds with an undesirable substance, such as coffee grounds or kitty litter. The mix should be placed into impermeable, nondescript containers, such as empty cans or sealable plastic bags, before being tossed in the trash.

In some cases, the risk of poisoning or abuse outweighs the potential environmental impact. The Food & Drug Administration recommends that certain controlled substances, such as the painkillers OxyContin and Percocet, are best disposed of down the drain. A full list is available at ONDCP's website (whitehousedrugpolicy.gov/drugfact/factsht/proper_disposal.html).

Pharmaceuticals sent to landfills, however, can end up at wastewater treatment plants as part of the muck that leaches out of the landfill. To ensure that drugs are disposed of in the most environmentally friendly manner, individual communities are developing pharmaceutical take-back programs that collect unwanted medications and then incinerate them.

"There are pilot programs going on all around the country," says Susan Boehme, a coastal sediment specialist with Illinois-Indiana Sea Grant (IISG), an organization that is educating communities in the Great Lakes region about the environmental effects of unwanted medicines. Although there's currently no national registry of pharmaceutical take-back programs, Boehme says that IISG is working with the website earth911.org to set up such a database. In the meantime, Boehme suggests that people interested in pharmaceutical take-backs contact their local household and hazardous waste office to find out if there's a program nearby.

Although it's not comprehensive, the Berkeley, Calif.-based Teleosis Institute also lists a number of pharmaceutical take-back programs on its website (www.teleosis.org). The institute launched its own take-back program in May 2007 and has already collected and incinerated more than 800 lb of unwanted medicines from people living in the San Francisco Bay area. The program uses local pharmacies, doctor and dental offices, and other heath care facilities as take-back sites.

The Teleosis Institute documents all of the returned medication and sends the data to the Unused & Expired Medicine Registry, which compiles national statistics on medicines returned and the reason for their disposal. Currently, the institute is picking up the tab for the take-back program, which costs about $4,000 annually for each of the program's 13 sites. The program may be more costly than other take-back programs that don't do the labor-intensive documentation or data analysis.

"By deepening our understanding of the quantities of medicines discarded, we can better comprehend the effectiveness of our current pharmacological approaches to illness, presenting a case for sustainable health care," says Joel Kreisberg, the institute's executive director.

Sustainability
Can laboratories move away from single-use plastic?
Environment
U.S. Counties Requiring Drug Makers To Take Back Unwanted Medicines
Policy
Environmental Protection Agency Proposes To Halt Health Care Facilities From Flushing Some Drugs Down The Drain
Share X
To send an e-mail to multiple recipients, separate e-mail addresses with a comma, semicolon, or both.
Title: What To Do With Your Unused Pharmaceuticals
Author: Bethany Halford
Chemical & Engineering News will not share your email address with any other person or company.