ON THE FARM
[+]Enlarge
Credit: Jerry Roitsch
Switch grass is harvested and stored in big round bales, each of which contains the equivalent of 50 gal of ethanol. 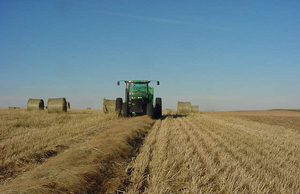 Credit: Jerry Roitsch
Switch grass is harvested and stored in big round bales, each of which contains the equivalent of 50 gal of ethanol.

Switch grass can produce more than enough cellulosic ethanol on a per-acre basis to offset the amount of energy needed to grow and convert the perennial prairie grass into biofuel, according to the first switch grass modeling study based on large-scale field-trial data (Proc. Natl. Acad. Sci. USA 2008, 105, 464). The study provides a clearer picture of the potential of switch grass as a biofuel feedstock that can be grown on marginal cropland, the researchers say, where it can provide environmental benefits in addition to energy. What's more, its use will help prevent corn and other food crops from being diverted into fuel making. 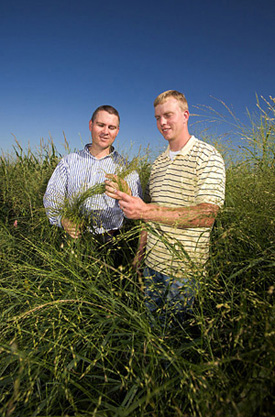 One key concern in converting the cellulose in switch grass, corn, and other crops to ethanol is the net energy value of the conversion. Previous feasibility studies have hinted at switch grass's potential, but they have been limited because they were based on small research plots, simulated biomass yields, and estimated farming and processing energy inputs.

Kenneth P. Vogel of the Department of Agriculture's Agricultural Research Service office at the University of Nebraska and coworkers now report having collected data over a five-year period from 10 farm sites in Nebraska and North and South Dakota. Farmers grew switch grass in fields up to 23 acres in size, tracking how much diesel fuel, seed, fertilizer, and pesticides they used, as well as the dry weight of switch grass harvested each year.

The researchers used the data to calculate the "embodied energy" of each of the inputs that contribute to the total energy cost of producing ethanol. As part of the calculations, they included energy costs of farm labor as well as ethanol product packaging and transportation costs.

The analyzed fields produced on average the biomass equivalent of 320 gal of ethanol per acre, a number the researchers estimated by using a reference conversion factor of 0.38 L of ethanol per kg of switch grass. Cellulosic ethanol will likely be produced by acid hydrolysis or steam separation of the cellulose, followed by additional enzymatic degradation to sugars and then fermentation of the sugars into ethanol. Several cellulosic ethanol pilot plants are currently operating, but the first commercial-scale cellulosic ethanol plant is not expected to start running until late 2009 (C&EN, Feb. 19, 2007, page 11).

The switch grass grown as a bioenergy crop produced 540% more renewable energy than the nonrenewable energy needed to produce it and convert it to ethanol, the researchers state. The study showed that switch grass ethanol production and use has the environmental benefits of near-zero net greenhouse gas emissions and aids soil conservation relative to typical agricultural crops. And compared with corn, "switch grass managed as a bioenergy crop in these field trials had estimated ethanol yields similar to those for corn grain grown in the same states in the same years," the researchers write. Advances in plant genetics and agricultural practices "may further enhance energy sustainability and biofuel yields of switch grass," they add.

The large amount of actual field data presented for switch grass production systems is a real advance, comments Michigan State University's Bruce E. Dale, a biomass conversion expert. "The study is a carefully done and carefully reported piece of work," Dale says. "It is valuable because the various efficiency metrics are well-defined and the underlying data are disaggregated in such a way as to allow someone to check or compare the data with other assumptions and studies."

But the science of biofuel conversion still has a long way to go, counters Cornell University's David Pimentel, a biofuels expert who believes biofuels' economic and environmental costs outweigh their potential benefits. Pimentel has several concerns about the validity of the Nebraska study's conclusions because the researchers make some assumptions that are not yet verified in practice, such as the conversion rate of switch grass to ethanol, he says.

There's no easy solution to meeting future energy needs, Pimentel adds. Scientists need to investigate all potential renewable energy technologies and not assume that cellulosic biomass is the only answer, because it realistically can supply only a small fraction of total fuel demand, he says. "A truly thorough examination of biomass and its environmental relationship to water, land, and solar energy is still needed."

Dale and Pimentel squared off in a C&EN Point-Counterpoint feature on the costs of biofuels last month (C&EN, Dec. 17, 2007, page 12). Although they don't see eye to eye on the practicality or benefits of biomass conversion to ethanol, they do agree that the type of detailed study by Vogel and coworkers is needed to advance cellulosic biomass conversion research.

Environment
Economic Realities Of Algae As Fuel Source
Environment
Crops For Bioenergy
Environment
More on Corn to Ethanol
Share X
To send an e-mail to multiple recipients, separate e-mail addresses with a comma, semicolon, or both.
Title: Ethanol From Switch Grass Deemed Feasible
Author: Stephen K. Ritter
Chemical & Engineering News will not share your email address with any other person or company.