A Strategy For Survival 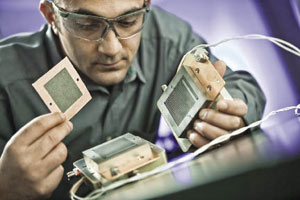 More immediately, however, Le Hénaff acknowledges that Arkema, just like competitors such as Dow Chemical, DuPont, BASF, and DSM, is going through an "unsettling period." And like them, Arkema has temporarily slashed production—in its case by temporarily shutting down or cutting back production at 40 sites around the world.

Le Hénaff estimates that Arkema's fourth-quarter sales will end up off 15% compared with the same quarter a year ago. "Many customers are working off inventories, especially in the automotive and construction sectors," he says. "We need to adapt to the economy of 2009, which will be very different than the first part of 2008."

To conserve cash, Arkema is accelerating a cost-reduction program launched in 2005 to save $685 million by the end of 2010. It has already achieved $450 million of that target and recently added another $70 million to its goal. Capital expenditures are likely to slip below the roughly $400 million the firm typically spends, although Le Hénaff pledges to protect important projects this year.

In a recent report to clients, Citigroup stock analyst Sophie Jourdier noted that the production cutbacks at Arkema are quite large, affecting about half of the firm's sites globally. She forecasts a sharp drop in the industrial economy lasting two years. And because about half of Arkema's sales come from its cyclical vinyls, acrylics, and hydrogen peroxide businesses, the company is in for a rough time. "In spite of Arkema's best efforts, we believe this will drive an earnings decline," she wrote.

Le Hénaff, 45, has led Arkema since 2004, when French petroleum giant Total decided to pare its chemical assets and focus on oil. He says he knows the months ahead will be difficult, and that is all the more reason to continue with the ongoing transformation of the company and maintain a long-term strategy.

Despite the turmoil at the end of the year, Arkema's 2008 operating profit margins will match the 9% achieved in 2007, he says. Margins in the first nine months of 2008, until Arkema began to feel the effects of the economic slowdown, were above 10%.

Overall, Arkema was having a pretty good 2008. Sales for the first nine months were up more than 2% to $6.1 billion compared with the previous year's period. Net income excluding unusual charges was up nearly 13% to $227 million. 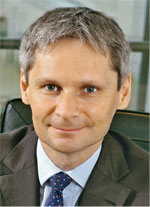 Le Hénaff, who has business management degrees from several institutions, among them Stanford University and école Nationale des Ponts et Chaussées (National School of Bridges & Roads), in Paris, says he has worked to streamline Arkema. Cost-reduction efforts since the firm spun out of Total in 2006 have included trimming fluorochemical production in Pierre-Bénite, France; streamlining the vinyl compounds business in Italy; and shutting down a plant in Pomezia, Italy, that produced acrylic cast sheets and blocks.

Arkema's decision in late November to end production of certain chemicals at two French sites provides a look into how the firm approaches cutbacks in a country where much of the workforce is unionized. Cuts in a poorly performing unit at one site are often accompanied by an investment in a stronger business unit or an effort to attract additional business at the same site.

At the Saint-Auban site, profits in the vinyl business have not been good for some time. The shutdown there of plants making copolymers of vinyl chloride and vinyl acetate for rigid films will reduce a drag on profits in Arkema's vinyls business, Le Hénaff points out.

Le Hénaff acknowledges that the cutbacks in Saint-Auban will eliminate jobs in an area where residents have limited job opportunities. To reduce the impact, Arkema plans to transfer 130 employees of the approximately 225 affected employees to a new unit, Arkema Interservices, that supplies utilities for the polyvinyl chloride paste, hydrogen chloride recycling, and 1,1,1-trichloroethane plants still operating there.

Le Hénaff hopes outside companies will set up shop at Saint-Auban to take advantage of services available from Arkema Interservices. For example, he wants to attract a venture that would produce silicon for the solar industry. Ultimately, he expects that new jobs created by third parties will more than make up for the loss of 96 jobs because of Arkema's own shutdowns.

AT A SITE in Jarrie, France, about 73 jobs will go. Although Arkema is closing a plant making aluminum chloride, which is used as a catalyst in pharmaceutical and chemical production, it plans to invest $10 million in hydrogen peroxide, chlorine, and caustic soda operations to make them more competitive.

But Arkema has done more than just retool its distressed assets. Since 2006, the company has also sold businesses with collective annual sales in excess of $520 million, including its agrochemicals business to India's United Phosphorus, a specialty amines business to amines specialist Taminco, and a superabsorbent polymers business to Sumitomo Seika. Just a few weeks ago, the firm arranged to sell its European quaternary and phosphoric esters businesses to U.S. chemical firm Stepan.

Meanwhile, the firm has made bolt-on acquisitions with combined annual sales of close to $300 million. They include acrylic rheology specialist Coatex and the poly(methyl methacrylate) business of the Spanish oil company Repsol YPF. And despite the economic slowdown, early last month, Arkema said it had a deal to buy the organic peroxides business of U.S.-based Geo Specialty Chemicals. With annual sales of about $30 million, the business will add to Arkema an organic peroxides production site in Franklin, Va.

The firm could make additional acquisitions, Le Hénaff says, although "we'd be cautious and will take our time." A strong balance sheet and a fully secured credit line through 2013 permit Arkema to complete deals despite current market conditions, he claims.

In addition to organic peroxides, Le Hénaff is on the lookout for deals in hydrogen peroxide, fluorochemicals, and technical polymers. Arkema now makes technical polymers including specialty nylon for automotive and aerospace applications, polyvinylidene fluoride for weather-resistant metal coatings, and functional polyolefins for coating wires and cables. Acquisitions in the near term are likely to be in the "small- to medium-size range," with annual sales of $20 million to $100 million, he notes.

Arkema At A Glance

Le Hénaff talks about expanding sales in Asia from about 15% of the company's global sales in 2008 to 20% by 2012. Usually with partners, the firm has started joint ventures in China focused on production of plastic additives, refrigerants, fluorinated polymers, and hydrogen peroxide. Over the past year, for instance, Arkema doubled hydrogen peroxide capacity at its site in Shanghai to 80,000 metric tons per year. The firm is considering another hydrogen peroxide plant in Asia, but Le Hénaff says that he sees "no urgency to build one" at this time.

Arkema has also eyed construction of an acrylic acid and esters plant in Asia and had previously signed a memorandum of understanding to set up such a joint venture with India's Essar Group using propylene from an Essar refinery. Problems related to raw material sourcing led to cancellation of the venture, Le Hénaff says, but he still expects Arkema to undertake an Asian acrylic acid project around 2012.

Important to the firm's long-term plans, Le Hénaff says, is the development of new products based on "sustainable R&D" that include such characteristics as biobased feedstocks or clean energy production. Among specific projects is one that uses glycerin, a by-product of biobased-diesel-fuel manufacturing, to make acrolein and then acrylic acid.

Another project seeks to develop the firm's Kynar fluorinated film for use as a proton exchange membrane in hydrogen fuel cells. In photovoltaic panels, fluorinated films could also be used as a durable backing sheet, and the firm's ethylene vinyl acetate could glue together panel layers. Arkema is also researching the use of poly(methyl methacrylate) as a lightweight lens in place of glass to focus the sun's light onto polysilicon panels.

Support for R&D is set at about 3% of sales and should continue at that level in 2009, Le Hénaff says. The budget sustains research at four sites in France, one in the U.S., and one in Japan. About one-tenth of the R&D budget advances corporate research focused on long-term projects, while the firm's various business units spend the rest of the budget on short-term projects.

No one knows how long the economic slowdown will last. And even though production cuts may be the rule now, investment in new products, cautious expansion in Asia, small to midsized acquisitions, and reorganizations will, in Le Hénaff's view, position Arkema to make a profit in good times and bad.

Business
BASF unveils major restructuring
Employment
Solvay overhauls R&D in France and Belgium
Business
BASF to buy Solvay’s nylon business for $1.9 billion
Share X
To send an e-mail to multiple recipients, separate e-mail addresses with a comma, semicolon, or both.
Title: A Strategy For Survival
Author: Marc S. Reisch
Chemical & Engineering News will not share your email address with any other person or company.