Soap On A Shoestring, It's No Lye 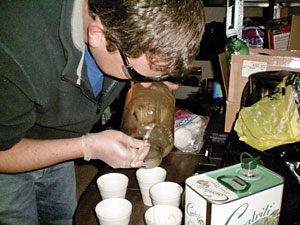 My wife's family is from Piaui, a small, arid state in Brazil's poor northeast region.

When Linda was growing up there in the 1970s, new technology arrived only after it was already old news in the more developed world. In the early 1970s, her family was the first in her neighborhood to get a television set.

My mother-in-law, Maria Rosa de Santana, whom I never met, grew up there at a time when the region's technology lagged behind that of the U.S. by about a century. She raised 16 of the 20 children that she gave birth to; four didn't survive. My wife, the youngest, was the only one born in a hospital.

Hearing stories about Maria Rosa, I am struck that this strong woman had the SPIRIT OF A CHEMIST and that chemistry was a part of her daily life. For example, one of her cooking tricks was to float a wooden match in a pan of vegetable oil that was heating up. The match would ignite when the oil was hot enough for deep frying. It works; I tried it myself.

She also made her own leather, soaking the hides in water with the bark of the angico tree, Anadenanthera colubrina, commonly used in the region for this purpose because of its tannins.

As a kid, my wife frequently observed her mother making soap. Maria Rosa's feedstock came from pieces of fat she trimmed off meat before cooking. She purchased anhydrous caustic soda at the local market. People brought their own containers and the attendant filled them—so much for Responsible Care.

At home, Maria Rosa mixed everything together with water over a fire out back. After stirring for about half an hour, she let the mixture set. When it hardened, she cut the resulting soap into bars, ready to go for bathing or washing clothes. Her large family went through a lot of soap.

These details that my wife remembers are sufficient for me to presume her mother used a hot process to make soap. This method has been employed for centuries to break triglycerides into fatty acid salts and glycerin, and it has the advantage of being rather forgiving in terms of proportions of lye used.

This story inspired me to make soap, too. Nobody does at-home chemistry anymore. Even two-part epoxy adhesives come in a syringe that doles out the components in exact, idiot-proof proportions. I set out to change all that.

I used a cold-process recipe that I found on the Internet. I didn't want to mess around with a heating element on my first try. And I didn't mind weighing the ingredients to precise specifications or waiting longer to use my soap. I substituted liquid-at-room-temperature, not-as-disgusting olive oil for the animal fat. Because the chemical composition of every fat is a little different, I had to adjust the amount of water and caustic soda—in my case, it was crystal drain cleaner from the hardware store—accordingly.

I was thrilled when I mixed the caustic soda into the water and it gave off heat that steamed up the glass pickle jar that I used as a reaction vessel. When I added the oil, it formed a milky emulsion with the water rather than separating like salad dressing; evidently, chemistry was occurring. When the mixture thickened, I poured it into my molds—plastic coffee cups.

It hardened slowly. After four days the soap had the consistency of canned yams and barely lathered. After a week, it was recognizable as soap. I began using it in the shower. It didn't give me a rash, although it was a little greasy. Next time, more lye. Or maybe I'll just do it my mother-in-law's way.

Women In Science
Career Ladder: Catherine Goffinet
Careers
Career Ladder: Hannah Follis
Education
Celebrating Halloween, chemistry style
Share X
To send an e-mail to multiple recipients, separate e-mail addresses with a comma, semicolon, or both.
Title: Soap On A Shoestring, It's No Lye
Author: Alexander H. Tullo
Chemical & Engineering News will not share your email address with any other person or company.