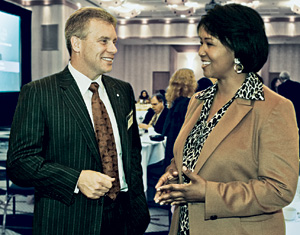 ON DEC. 11, 2008, Bayer Corp. held its second STEM (science, technology, engineering, and mathematics) Education Diversity Forum in San Francisco. Titled "Bridging the Diversity Gap: Introducing STEM Industries to K–12 Best Practice Programs," the forum is an outgrowth of a recent survey commissioned by Bayer Corp. The survey found wide agreement among the Fortune 1000 chief executive officers of STEM-based companies polled that they and their companies have a responsibility to support precollege STEM education programs that are developing the next generation of innovators, particularly those who have traditionally been underrepresented in STEM.

The forum showcased for the nearly 200 industry executives and others in the audience an array of best practice elementary and secondary education programs that are helping all students—especially girls, African Americans, American Indians, and Hispanics—achieve in STEM subjects. The American Chemical Society's Project SEED program, which celebrated its 40th anniversary last year, was one of 16 programs featured.

Comment
Strengthening partnerships with our sister societies
ACS News
ACS Scholars announced for 2018
Environment
ACS participates in UnidosUS
Share X
To send an e-mail to multiple recipients, separate e-mail addresses with a comma, semicolon, or both.
Title: Bayer Diversity Forum Honors Project SEED
Author:
Chemical & Engineering News will not share your email address with any other person or company.