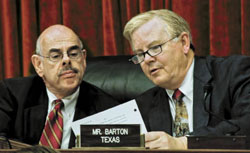 After one week of long hours and heated arguments, the House Energy & Commerce Committee, on May 21, cleared H.R. 2454, the American Clean Energy & Security Act of 2009, by a 33 to 25 vote. The final vote, like the sharp debate, was mostly along political party lines with only one Republican joining Democrats in support of the climate change bill and four Democrats shifting to the Republican opposition.

H.R. 2454 would reduce global-warming pollution to 97% of 2005 levels by 2012, 80% by 2020, 58% by 2030, and 17% by 2050. It sets up an elaborate carbon dioxide cap-and-trade system to help reach these goals, but in the early years it provides aid to some energy sectors in the form of free greenhouse gas emission allowances. Some 15% of the allowances are earmarked for companies in energy-intensive and internationally competitive industries, which could include the chemical industry, and some 50% would go to fossil-fuel-dependent energy providers. In all, some 85% of the emissions allowances would be given away in the early years as companies first come into compliance.

The 950-page bill also includes a host of energy provisions, among them incentives and requirements to encourage carbon sequestration demonstration projects, electric vehicles, energy efficiency in buildings and appliances, an efficient and "smart" electrical transmission grid, and development of many other cleaner ways to generate and use energy. It also provides economic aid to consumers who will be hit by higher energy prices.

"This bill, when enacted into law this year, will break our dependence on foreign oil, make our nation the world leader in clean energy jobs and technology, and cut global warming pollution," said Committee Chairman Henry A. Waxman (D-Calif.), the bill???s main sponsor. Leading the committee opposition was Minority Leader Rep. Joe Barton (R-Texas), who wished to kill the bill, particularly its cap-and-trade provisions.

Barton and other committee Republicans had threatened to introduce hundreds of amendments to weaken the bill during debate and to strike the cap-and-trade provisions. Barton offered his own plan that would grandfather in all currently operating coal-fired power plants and create a system to encourage far smaller CO2 reductions through incentives; the Barton alternative was voted down along party lines.

In all, the committee voted on nearly 90 amendments. Waxman and the Democrats, with a 13-vote majority, had the votes to overcome opposition and used them.

The bill still has a way to go. It remains unclear when it might reach the House floor. As many as eight other House committees have jurisdiction over portions of the bill, and several committee chairmen have signaled they would like to modify it. Also, several key committee chairmen have said they would like to consider health care legislation before taking on the climate-change debate. However, House Speaker Nancy Pelosi (D-Calif.) says she intends to bring the bill to the House floor this summer.

??The American Chemistry Council supports some of the recent bill modifications that extended emission reduction targets. However, the trade association said in a statement that it will seek to change several provisions, among them the base-line year of 2005. ACC says 2005 was a low CO2 emissions year for the chemical industry due to hurricane-related production disruptions. ACC also is displeased with bill provisions affecting energy intensive industries, such as the chemical industry. It also wants to soften emissions targets in the early years of the program.

, the U.S. Climate Action Partnership—a coalition of industrial and environmental groups that includes Dow and DuPont—voiced support for committee passage of the bill and said the legislation "broadly embraces the approach recommended by USCAP." In several areas, however, the bill goes beyond the coalition's draft bill, USCAP says, and it will attempt to modify these provisions as the bill moves through the legislative process.

Jonathan Lash, president of the World Resources Institute, which is a member USCAP, said the bill is a "crucial first step in the U.S. legislative journey.

"WRI will continue urgently to pursue the passage of environmentally protective, economically sustainable, and fair climate legislation. We look forward to working with Congress as the legislative process continues on this critical issue."

Generally the bill enjoyed support from environmental groups, although some were concerned over the number of free allowances in the early years.