Graphene isn't the only material capable of existing as a free-standing one-atom-thick film. The widely studied carbon material now shares that distinction with boron nitride, according to researchers in Germany (Nano Lett., DOI 10.1021/nl9011497).

Atomic Knockoff
Credit: Jannik Meyer/U. Ulm
Under the influence of the energetic beam in an electron microscope, thin regions of a boron nitride crystal grow thinner still, eventually being reduced to single-atom thickness, as seen in these videos.
THIN AS CAN BE
[+]Enlarge
Credit: Jannik Meyer/ U of Ulm
Few-atoms-thick boron nitride crystals become thinner as an electron beam forms triangular and polygon-shaped vacancies. 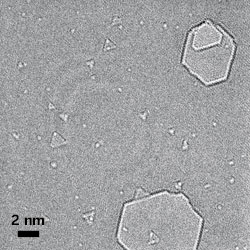 Scientists had long predicted that single-atom-thick sheets of materials like graphene would spontaneously roll up into tubes or other curved structures if, indeed, the superthin films could be formed at all.

Just a few years ago, however, researchers showed that not only is it possible to separate atom-thick sheets of graphene from graphite, but it's also easy to do. That discovery touched off an explosion of studies that uncovered outstanding and potentially useful mechanical, electronic, and chemical properties of the thinnest material (C&EN, March 2, page 14). Now, atom-thick boron nitride films may be poised to share the spotlight with graphene.

Many other types of atom-thick monolayers have been grown on solid supports. But unlike graphene, other films generally cannot be separated intact from their supports.

Jannik C. Meyer, Ute Kaiser, and coworkers at the University of Ulm prepared microscopy samples of "hexagonal" boron nitride (h-BN) by peeling apart thin crystals of h-BN with adhesive tape—a method commonly used with graphene. Then, they transferred the few-atoms-thick flakes to a microscopy grid, a support that leaves relatively large sections of the flakes (millions of atoms) freely suspended over the grid holes.

By exposing the sample to a transmission electron microscope beam, the team ejected atoms from the lattice and thinned the crystals to a single atomic layer. The group controlled the rate at which the beam whittled away the film by tuning the beam intensity and imaging conditions.

They were able to analyze the sputtering process by recording atomic-resolution images and videos. Among other findings, the team observed that the electron beam sweeps away one atomic layer at a time by forming triangular and polygon-shaped vacancies.

University of Manchester physicist Kostya S. Novoselov comments that this study provides insight into the mechanical properties and defect formation in boron nitride and marks "an important milestone in our understanding of the properties of two-dimensional crystals."

Metal-Organic Frameworks
Three-dimensional COF crystals keep growing
Materials
A Glimpse Of Silica In Motion
Materials
Nanoparticle Arrays For Faster Electronics
Share X
To send an e-mail to multiple recipients, separate e-mail addresses with a comma, semicolon, or both.
Title: Another One-Atom-Thick Material
Author: Mitch Jacoby
Chemical & Engineering News will not share your email address with any other person or company.