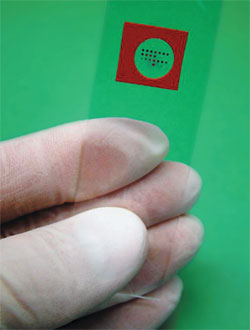 Not surprisingly, most of the detected cases of the newly emerged 2009 H1N1 virus have been in well-off countries that can afford diagnostic tools. “What we and many other diagnostic companies are trying to do is develop technology that is less expensive and easy to use so that it can be placed in parts of the world that really need to do more surveillance,” says Kathy Rowlen, chief executive officer of InDevR, a small biotechnology firm in Boulder, Colo.

More expensive real-time reverse transcriptase polymerase chain reaction (rRT-PCR) methods, which measure influenza-specific RNA, are very sensitive when the properly designed panel of primers and probes is in hand, Rowlen explains. Once the U.S. Centers for Disease Control & Prevention created a relevant panel in April, the Food & Drug Administration issued an Emergency Use Authorization (EUA) allowing qualified labs to use the CDC assay. Soon after, FDA granted an EUA to Focus Diagnostics for its rRT-PCR test.

According to evaluations by CDC and other research groups, however, testing falls short with another test class: rapid antigen-detection immunoassays. Although such tests can give an answer within 30 minutes, many can determine only whether a person has influenza and cannot distinguish between subtypes or detect the novel H1N1 virus. Because of the unacceptably low sensitivity of rapid tests to rule out novel H1N1 infections, CDC offers guidance on how to interpret results and proceed with treatment.

In the meantime, CDC has been working with Meso Scale Diagnostics to advance a rapid point-of-care test that can identify subtypes. Likewise, with support from the National Institute of Allergy & Infectious Diseases, InDevR researchers, while still at the University of Colorado, Boulder, collaborated with CDC to develop low-density DNA microarray technology.

With support from a National Institutes of Health grant, “we are looking to place this technology in 20 or so public health labs, at no cost to the labs, by the end of October or early November,” Rowlen says. The system includes the microarrays and a reader that costs under $4,000, which is several times less than the cost of an rRT-PCR setup.

Rather than targeting the virus’s mutable hemagglutinin or neuraminidase genes as other methods do, InDevR’s FluChip uses the more stable M gene that encodes for an internal matrix protein. “We discovered that the M gene alone told us something about the subtype,” Rowlen says. The company has shown that its test can distinguish novel H1N1 viruses, seasonal H1N1 and H3N2 viruses, and the deadly avian H5N1 virus.

InDevR’s FluChip assay can identify an influenza A virus when its genetic sequences bind to complementary segments on the microarray. These segments are labeled with a photoinitiator, rather than an expensive fluorescence label. Exposure of a monomer solution on the microarray to light produces a visible pattern of polymeric dots that acts as a fingerprint for the virus subtype. “With a low-density microarray, we can address more gene targets than you can in a typical rRT-PCR assay, which is usually limited to one or two,” Rowlen explains.

InDevR is developing two versions of its FluChip, one that requires about three-and-a-half hours to complete and one that takes about twice as long but provides more information. That the M gene can be used to identify different viruses and is highly reliable in testing could become important if the novel H1N1 virus were to mutate and become harder to detect. “We’re not replacing rRT-PCR, but our technology is complementary to others and can stand in place if those assays should fail,” Rowlen says.

Diagnostics
Rapid COVID-19 testing breaks free from the lab
Diagnostics
COVID-19 antigen tests have landed in the US, but not everyone is rushing out to get them
Diagnostics
COVID-19 antibody tests are raising as many questions as they answer
Share X
To send an e-mail to multiple recipients, separate e-mail addresses with a comma, semicolon, or both.
Title: Reliable, Easy-To-Use Tests Could Aid Treatment
Author: Ann M. Thayer
Chemical & Engineering News will not share your email address with any other person or company.