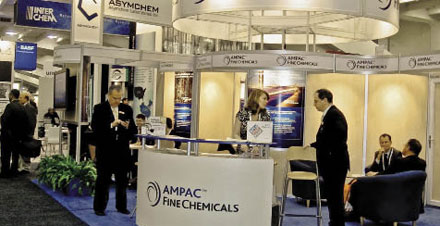 If misery loves company, then 2009 was sure to make fine and custom chemical manufacturers commiserate. At the annual Informex trade show in San Francisco last month, companies that lived through the economic recession came together to look ahead and share cautious optimism that business will improve. They were also there to attract customers, which they did by emphasizing new capabilities and technology offerings, many of which are arising from partnerships with fellow suppliers.

“I am pleased to say that we survived 2009, because it has been a rough market,” said Gilles Cottier, president of SAFC, the fine chemicals arm of Sigma-Aldrich. He believes SAFC is stronger than it was a year ago, having stuck with its strategy to expand capacity and focus on differentiating technologies. “We kept growing despite the downturn,” he said, noting that SAFC has seen its projects with customers in the early phases of drug development rise during the past 18 months.

Nevertheless, uncertainty remains. “The life sciences industry has been challenged and will continue to be,” Cottier added. Although he noted that funding is returning to biotech companies, it is not yet at the level it once was or where it should be. Meanwhile, large pharmaceutical companies “can’t go it alone and need to have partners,” he said.

Wolfgang Schmitz, managing director of Saltigo, the custom synthesis arm of Lanxess, pointed out a distinct opportunity in pharmaceutical outsourcing as major drug companies work to reduce their operating costs. At the same time, drug firms want to consolidate the number of suppliers they work with. “Big pharma is looking to streamline their organizations,” Schmitz said. “We see a changing pattern where customers are wanting more and more to discuss with us our approach to driving costs down and at the same time guaranteeing the quality of our work.”

Uwe Brunk, head of Saltigo’s agricultural and specialty chemical unit, is optimistic about 2010. “The global market looks good,” he said. “Latin America is doing very well. Our ag chem customers are expecting a good year.” Although 2008 was the company’s “best year ever” in the agricultural sector, business slowed in 2009, he noted, largely because of inventory surplus. The company was buffered to some extent by long-term contracts.

Specialties are picking up as well, according to Brunk, mostly on the backs of customers attempting to innovate in some of the hardest hit sectors. He hopes specialty chemical sales will return to 2008 levels this year.

At AllessaChemie, business has “stabilized,” according to Michael Hassler, director of business development. Sales of specialty chemicals in automotive, construction, and polymer markets slumped last year because of the economy, but customers are starting to buy again, Hassler said. The firm’s agricultural chemical business did well last year, he said, but is sagging now because customers have overstocked  inventories.

AllessaChemie recently completed a reorganization that eliminated about 200 jobs. Formed in 2001 from specialty chemical businesses of Hoechst and Clariant, the company has closed a plant in Offenbach, Germany. It housed an underperforming former Clariant operation that made the pigment Reflex Blue.

According to Hassler, Allessa­Chemie is “moderately upbeat” on 2010, noting strength in pharmaceutical intermediates and the return of specialty chemical customers who now must replenish inventories. Although the firm wants to expand its exclusive synthesis and toll manufacturing operations, it is also interested in expanding its businesses in specialty polymers and oil-field chemicals. 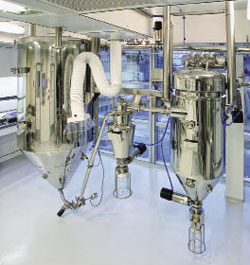 “We benefited from long-term contracts and significant new business development last year,” he explained. The firm is targeting annual revenues of $385 million within three years, by which time it hopes to be operating at five or six sites.

Thus, Aesica is on the lookout for acquisitions. In particular, the company wants to establish drug formulation capabilities in the U.S. It currently does formulation work in Queenborough, England, at the former Abbott plant. Aesica also is looking for pharmaceutical chemical manufacturing facilities outside the U.K. but is not necessarily interested in continuing to purchase them from drug firms, Sims said.

Although sales at Ampac Fine Chemicals declined in 2009, President Aslam Malik takes pride in his firm’s cash position and financial stability. “During a downturn is the time to build” and prepare for the future, he told C&EN. To this end, Ampac will invest in more kilogram-scale production of highly potent compounds and will add equipment for milling cytotoxics. It will also modify an existing plant to expand its semiworks-scale capacity—a few hundred kilograms per batch—to meet demand for drugs in Phases II and III of development. Malik expects that Ampac will be ready to open a new controlled-substances facility later in 2010.

“Our strategy is exactly what it has been for years, and that is to be a U.S.-based, technology-focused operation and continue to build on a foundation of engineered chemical solutions,” Malik said. To expand its toolbox and better serve biopharma and other firms, Ampac has signed a deal to work with biocatalysis developer Codexis. With this access, Ampac will be able to develop customers’ synthetic routes in parallel, using complementary technologies, he said.

At Informex, Codexis also announced an agreement with India’s Dishman Pharmaceuticals & Chemicals. Under the agreement, Dishman will manufacture products for Codexis and will also use the California firm’s technology in its own contract production of active pharmaceutical ingredients (APIs) and intermediates.

Nick Green, president of Dishman’s contract research and manufacturing services division, pointed out that the company, which acquired the Swiss fine chemicals firm Carbogen Amcis in 2006, has distinguished itself from other Indian companies by investing in high-end technology. The firm’s recently inaugurated high-potency plant in India (C&EN, March 1, page 26) gives Dishman “complementary assets” in Europe and Asia, allowing it to compete on more than price, Green said.

Similarly, the Dutch firm DSM was promoting the combined use of bio- and chemocatalysis to address cost pressures and customer desire for green chemistry in pharmaceutical manufacturing. For example, DSM scientists Oliver May and David Ager described a two-step route to an indoline-2-carboxylic acid intermediate using a biocatalyst and homogeneous copper catalyst in place of an earlier seven-step classical resolution. DSM developed a unique ammonia lyase biocatalyst in collaboration with enzyme developer Verenium and then produced it at large scale.

“This was a second-generation process targeting lower cost manufacturing,” May told C&EN. It also is an example of using biocatalysis under extreme conditions that were necessary for the particular reaction to be efficient. “It’s the integration of the different technologies that makes processes green. There is not a single best technology, and so you have to access all of them,” he added.

Likewise, Northern Ireland’s Almac touted the growth of its biocatalyst business, which is moving toward increasingly larger scale production of chiral intermediates. The company also launched its accelerated process for drug development, called Rapidd, in North America. Central to this offering is Almac’s collaboration with select contract research partners, such as Covance, to cover all the bases in early-stage drug development.

Along these lines, Almac was among companies at Informex that highlighted the installation of Xcelodose, a powder microdosing technology developed by Pfizer’s Capsugel division for rapidly and precisely creating clinical-trial dosages. Another firm touting installation of the formulation system was AMRI, although its big announcement at Informex was the acquisition of Excelsyn, a U.K.-based contract manufacturer of pharmaceutical chemicals (C&EN, Feb. 22, page 19).

Product form and formulation was the focus of many other exhibitors as well. For example, BASF’s pharma ingredients and services business is cooperating with GEA Niro, a Danish firm offering spray-drying technology. Through this connection, BASF will be able to provide current Good Manufacturing Practices (cGMP)-compliant spray-drying of pharmaceutical ingredients for its custom synthesis customers at GEA’s pharma test station in Copenhagen.

Building on its experience in solid-state chemistry and API production, Solvias debuted a service to help companies develop robust and scalable crystallization processes that reliably yield the desired crystal form in manufacturing. According to the company, controlling crystallization is one of the biggest problems customers have and is best addressed in early development.

Once parameters for crystallization have been determined, they are translated to the large scale by Solvias’ production team, explained Rolf Hilfiker, Solvias’ head of solid-state development. The company will even make, under cGMP conditions, kilogram quantities of seed crystals to initiate crystallization in large-scale processes. About 95% of all crystallizations are done through seeding, he added.

At the same time, Solvias has been expanding its capacity for kilogram-scale API production. “Our plant came on-line in August, and we immediately had the first customer,” said Michael Quirmbach, product manager for synthesis. Despite a decline in early-stage projects for the industry overall, Solvias has booked a number of additional Phase II projects, he added. The company is now adding high-pressure hydrogenation capabilities under cGMP standards.

Meanwhile, in Belgium, Albemarle has begun construction of a kilogram-scale lab to work with European customers, reported David W. DeCuir, director of the company’s fine chemistry services division. Belgian projects will also be transferred to the larger U.S. plants for commercial manufacturing.

Addressing the needs of its emerging-company customers, Rondaxe, a Syracuse, N.Y.-based drug development consulting firm, has joined with the nonprofit TGen Drug Development. The Scottsdale, Ariz.-based organization, an affiliate of the Translational Genomic Research Institute, guides companies through the clinical-trial and regulatory process. The focus, said Jeffrey M. Evans, a Rondaxe managing partner, is oncology, which represents 60–65% of the drug development market and is poised for growth in 2010.