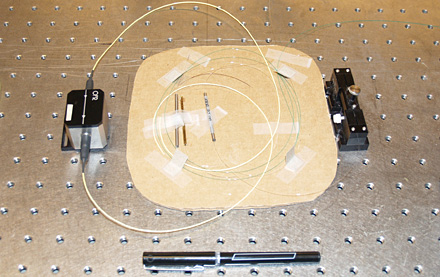 If the various lasers currently used to aid chemical research—particularly ultrafast chemical research—belonged to the world of boxing, the titanium sapphire laser would be the reigning heavyweight champ. The solid-state laser makes some of the shortest light pulses ever generated and can put out tunable light having wavelengths all the way from 650 nm to 1 μm. Not only that, but "it already has some 20 years of engineering behind it," says Frank Wise, a professor in the School of Applied & Engineering Physics at Cornell University.

But now a scrappy challenger has entered the ring. "The fiber laser is looking very promising" for studying ultrafast reactions, says Martin T. Zanni, a chemistry professor at the University of Wisconsin, Madison. This laser uses a stretch of fiber filled with a dopant material instead of a crystal rod to amplify light, as solid-state lasers typically do, and it has a number of beneficial qualities. "Fiber lasers are cheap, reliable, and they don't consume much power," says X. Sunney Xie, a chemistry professor and nonlinear microscopy expert at Harvard University. "They are the future."

Other than being expensive, the Ti:sapphire laser has the drawback that it requires another cumbersome laser to pump, or jump-start, it. Fiber lasers, however, are pumped directly with small inexpensive laser diodes, says Sterling Backus, vice president of R&D at laser company KMLabs. "They are much, much smaller and much less complex," he says.

They can also put out tunable infrared pulses in the 1–2 µm wavelength range and tens of kilowatts of power, Backus says. "It is incredible the amount of power you can get out of a single fiber," he adds. And all of that energy comes from something the size of a shoebox, according to Xie. "This will be a laser that doesn't even require an optical table. You can mount it on an instrument rack," he says.

But "when it comes to short pulses," Backus says, "especially in the realm of femtosecond pulses, fiber lasers have a long way to go." He and others in the laser industry are working to make them more viable in the ultrafast regime. "The place where fiber lasers have real challenges is handling the very high pulse energies that Ti:sapphire lasers can," Wise says. Although they have been around for years and operate well for nonpulsed applications, "this is just the beginning" for ultrafast work, he adds. "I think we'll see significant development in this area in the next few years."

Zanni, an expert in the field of two-dimensional IR spectroscopy, is excited by the prospect. "With molecular vibrations," he says, "more powerful mid-infrared pulses could lead to crazy things like controlling chemistry. Vibrations aren't just spectators—you actually extend bonds when you vibrationally excite something."

Xie sees things in a similar light when looking ahead for bioimaging. "The fiber laser will be the future ultrafast laser for research, as well as for medical diagnostics," he says.

Before these achievements can come to fruition, the scrawny contender will have to go a few rounds and then go commercial.