Up In The Air
[+]Enlarge
Credit: Air Force
Powerful lasers, such as this one at an Air Force laboratory in Albuquerque, N.M., lie at the heart of LIDAR methods for probing the constituents of the atmosphere. 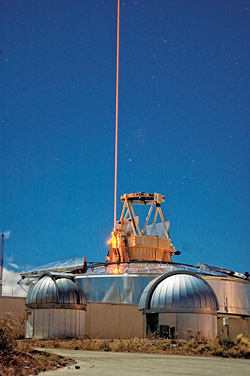 Credit: Air Force
Powerful lasers, such as this one at an Air Force laboratory in Albuquerque, N.M., lie at the heart of LIDAR methods for probing the constituents of the atmosphere.

By probing the skies with laser light, for 40 years researchers have been learning about the clouds, aerosols, and chemical constituents that make up Earth's atmosphere. Directly analogous to radar, which stands for radio-wave detection and ranging, the collection of light-based detection and ranging (LIDAR) methods relies on pulsed laser beams being scattered from atoms, molecules, and particles in the atmosphere and reflected back at a telescope positioned near the laser source. One version of the technique, based on Rayleigh scattering from nitrogen and oxygen molecules, is used to study climate change by determining variations in seasonal temperature profiles through altitudinal "slices" between 35 and 90 km, according to Vincent B. Wickwar, a physics professor and staff member at the Center for Atmospheric & Space Sciences at Utah State University, Logan.

Other LIDAR methods probe changes in the concentrations of ozone, carbon dioxide, and water vapor throughout that altitude range and provide data that are key to understanding the abundances of those species and the chemical reactions they undergo. At somewhat higher altitudes, a highly sensitive method based on resonance-scattering LIDAR is used to measure trace-level products of meteorite disintegration, including sodium, potassium, iron, calcium, magnesium, and aluminum. Back at ground level, researchers such as Joshua P. Herron, a staff scientist at Utah State's Space Dynamics Laboratory, are working at the Army's Dugway Proving Ground nearby to develop a LIDAR-based system for remotely detecting nerve agents and various other harmful chemical and biological species via their infrared and fluorescence signatures.