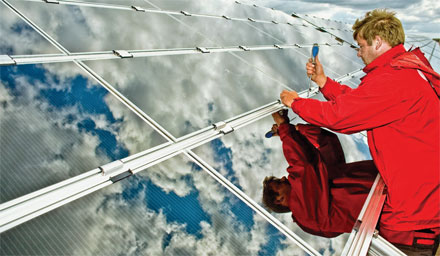 Credit: Newscom
Many thin-film solar products are manufactured with powerful synthetic greenhouse gases such as NF3.

Under the Copenhagen Accord, the new international climate-change deal, dozens of countries have pledged to control their greenhouse gas emissions. Although it’s not legally binding, the agreement specifies that emission reductions by industrialized countries will be measured, reported, and verified publicly. But the Copenhagen Accord leaves to future negotiations the job of specifying how countries’ declarations of emission cuts will be truth-checked.

Policy experts often allude to verification of such assertions about emissions via third parties—perhaps representatives from other countries—who check the written reports. But there is another way to verify emissions: through direct observation.

“We really ought to measure what ends up in the atmosphere,” says Ray F. Weiss, a geochemistry professor at Scripps Institution of Oceanography, part of the University of California, San Diego.

The idea of direct observation to verify reporting has not received much attention so far in the policy arena. Several think tanks and environmental groups heavily involved with the details of greenhouse gas emission trading systems were unable to answer or did not respond to C&EN’s queries about the potential of atmospheric measurements as a means of verification.

“When you hear politicians tell you, ‘We will be able to tell you exactly what our emissions are because we passed a law that requires people to report them,’ I think you should take that with a few grains of salt,” Weiss says.

There’s a reason for his skepticism. For some greenhouse gases, notably industrial chemicals used to manufacture the stuff of modern life, including semiconductors and flat-screen televisions, there are significant discrepancies between reported emissions and atmospheric measurements.

Weiss led a team of researchers as part of the National Aeronautics & Space Administration-sponsored Advanced Global Atmospheric Gases Experiment (AGAGE) research program in making the first atmospheric measurements of nitrogen trifluoride. This gas is used in the manufacture of liquid-crystal flat-panel displays, thin-film photovoltaic cells, and microcircuits. NF3 is a greenhouse gas that, on an equal-mass basis, has the potential to warm the atmosphere 17,200 times more than carbon dioxide over the course of a century. The team’s work, published in 2008, found that NF3 is at least four times more prevalent in the atmosphere than industry estimates had suggested (C&EN, Nov. 3, 2008, page 9).

Similarly, the National Oceanic & Atmospheric Administration (NOAA), the University of Heidelberg, and AGAGE, through air measurements, have independently determined that emissions of the greenhouse gas sulfur hexafluoride are higher than industrialized countries are reporting. SF6, used in high-voltage equipment as a dielectric medium and in industrial processes that require a heavy and inert gas, has a global-warming potential 22,800 times that of CO2 over a time frame of 100 years.

Atmospheric concentrations of many industrially produced compounds, including NF3, SF6, and many other halogenated gases, are easier to link to their anthropogenic emissions than is CO2. Unlike CO2 or other gases, which have many natural and anthropogenic sources and sinks, these synthetic chemicals have limited origins.

But finding a way to measure CO2 emissions is important because the gas accounts for more than half of the global warming caused by human activity. The challenge facing researchers is to tease out which changes in atmospheric CO2 concentration stem from the burning of fossil fuels and which are due to natural fluctuations.

For example, more CO2 is released to the atmosphere at night, when plants are respiring, than during daylight hours, when they are engaged in photosynthesis and gas absorption. There are also large seasonal swings in CO2 levels: Amounts are lower during spring and summer seasons, when plants are growing and absorbing CO2, and higher during autumn and winter. Large fluxes of CO2 into and out of the oceans occur as well, depending on location and season.

The release of CO2 from fossil-fuel combustion, however, is unique because it contains virtually no carbon-14, a radioactive isotope of carbon produced by cosmic rays in the atmosphere and by nuclear testing. So determining which portion of an air sample’s CO2 comes from the biosphere depends on analysis of its 14C content, which has a half-life of about 5,730 years. Although this requires more analysis than synthetic gases do, it is possible to distinguish between CO2 released from natural sources and CO2 emitted from the combustion of fossil fuels.

Just as for CO2, researchers are working to separate natural and anthropogenic emissions of other key greenhouse gases such as methane or nitrous oxide.

Once data from ground-based atmospheric measurements of human greenhouse gas emissions are generated, they can be coupled with existing atmospheric models to determine where—at least regionally, as opposed to from a particular factory or power plant—emissions originate.

Researchers do so by employing computer models designed to estimate where toxic materials spread if they are accidentally or intentionally released, Scripps’s Weiss explains. For example, the National Atmospheric Release Advisory Center, based at Lawrence Livermore National Laboratory, has models that can be used to map the probable spread of hazardous materials released into the atmosphere. And the Comprehensive Test Ban Treaty Organization, which operates monitoring stations around the world to detect airborne radioactive materials, has models it uses to identify areas where nuclear fuels are processed or where bombs are built.

For the purposes of greenhouse gas verification, “those computer models, which are based on atmospheric weather observations, can be run backward,” Weiss points out. When ground-based measurements show peaks above global or hemispheric background values due to regional emissions of a particular greenhouse gas, the models help researchers determine the location and magnitude of the original emissions.

In principle, scientists can deduce the greenhouse gas emissions from various regions of the world, says Ronald G. Prinn, director of Massachusetts Institute of Technology’s Center for Global Change Science. However, current ground-based atmospheric measurements are neither taken often enough nor taken at locations close enough together for verifying greenhouse gas emission reductions from a specific location within an acceptable range of certainty. Improving certainty would require about 100 stations around the world to sample the air 10 to 20 times per day, Prinn says.

The current models are limited by technology, Weiss points out. Todays’ technology currently in use can measure atmospheric concentrations of about 40 different gases once every two hours, Weiss says. Equipment under development would take continuous measurements and need recalibration relatively infrequently, he says.

To help researchers identify the origin of emissions with more certainty and fill the technology gap, there are two major ongoing efforts to track greenhouse gas concentrations in the atmosphere. Prinn and Weiss lead the AGAGE network of monitoring stations around the world that continuously measure the composition of the atmosphere. AGAGE measures more than a dozen compounds that deplete stratospheric ozone and several greenhouse gases other than CO2.

The second major network is operated by NOAA’s Earth Systems Research Laboratory, which makes continuous measurements at a few stations and also collects air samples from around the world about once per week from ships, aircraft, observatories, and tall towers. Among the gases it measures are CO2, methane, nitrous oxide, halocarbons, and SF6.

Aside from the impact that verifying emission reports through atmospheric measurements would have on policy, the international market for greenhouse gas offsets would also be affected, Prinn and Weiss say.

Verification information could help stabilize greenhouse gas trading markets by ensuring that an offset purchased by a buyer under a given system actually represents a cut in emissions, Weiss says. “Like any other market instrument, you’ve got to have confidence in the true value behind it,” Prinn says of offsets.

Atmospheric measurements could be especially applicable to offsets of synthetic greenhouse gases, which are easy to directly measure. This group of gases is an attractive trading target because of its high global-warming potential. For instance, a small cut in emissions of, say, hydrofluorocarbon-23—a by-product of making the refrigerant hydrochlorofluorocar bon-22—can be a valuable commodity in an emission-trading market (C&EN, March 23, 2009, page 33).

“It’s called a carbon-trading market, but much of the trading—a very big fraction of it—is in these industrial gases because the global-warming potentials are so large that one can make an awful lot of money by not emitting,” Weiss says.

Ultimately, though, atmospheric measurements should supplement, not supplant, calculations of greenhouse gas emissions, Weiss and Prinn say. Empirical measurements could be “an important cross-check” for emissions reported on paper and required under legislation or treaty, agrees Michael Wara, a professor at Stanford Law School.

The measurements could be used to improve calculations so they more closely reflect reality, Weiss says. This would ensure that the emission-reporting protocols that nations use “actually give you what you see in the atmosphere,” he adds.

“In the end, the climate doesn’t care what you report,” Weiss says. “It only cares about what you emit.”

Environment
Pledges Add Up To 3 °C Of Warming
Environment
Climate Change Conference In Peru Sets Stage For Global Emission Control Commitments In 2015
Environment
Carbon Conundrum
Share X
To send an e-mail to multiple recipients, separate e-mail addresses with a comma, semicolon, or both.
Title: Verifying Emission Cuts
Author: Cheryl Hogue
Chemical & Engineering News will not share your email address with any other person or company.