A View Inside Tissues And Cells

IN LIVING COLOR
[+]Enlarge
Credit: Courtesy of Stefan Hell
STED nanoscopy can be used to image detailed structures in living cells, such as the dendritic spines (branched areas) on this neuron, which expresses yellow fluorescent protein.

Credit: Courtesy of Stefan Hell
STED nanoscopy can be used to image detailed structures in living cells, such as the dendritic spines (branched areas) on this neuron, which expresses yellow fluorescent protein.

A View Inside Tissues And Cells

Ask X. Sunney Xie to identify ultrafast lasers' greatest impact on the life sciences, and his response is reflexive. "Imaging," he says, without skipping a beat. "Look at how many ultrafast lasers are made and sold for that purpose," says Xie, a chemistry professor at Harvard University and pioneer of CARS (coherent anti-Stokes Raman scattering) microscopy. "I think in recent years, it is clear the dominant market is for imaging."

LABEL-FREE
[+]Enlarge
Credit: Christian Freudiger/Harvard U
Stimulated Raman scattering microscopy image of mouse skin taken at a depth of about 60 μm. The lipids (green) of a sebaceous gland that wraps around a hair rich in protein (blue, center) are visible. 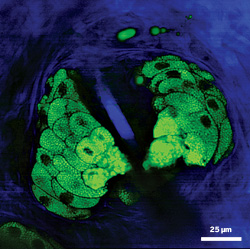 Credit: Christian Freudiger/Harvard U
Stimulated Raman scattering microscopy image of mouse skin taken at a depth of about 60 μm. The lipids (green) of a sebaceous gland that wraps around a hair rich in protein (blue, center) are visible.

Although the idea for confocal microscopy, a method that can acquire in-focus images of samples at select depths, was patented in the late 1950s, it took the invention of the laser to make the technique routine. Confocal laser scanning microscopes are now standard for three-dimensional imaging of cells, "particularly live cells," says Stefan W. Hell, a laser microscopy expert at the Max Planck Institute for Biophysical Chemistry, in Göttingen, Germany.

And in the past two decades, improvements in optical technology and the development of robust ultrafast lasers have caused an explosion of new and innovative microscopy techniques.

Superresolution fluorescence methods enable the imaging of fluorescently labeled biological structures with dimensions on the order of tens of nanometers. For instance, STED (stimulated emission depletion) microscopy, a technique pioneered by Hell, has made it possible to go beyond the diffraction-limited resolution of light. With it, his group has been able to look inside brain tissue slices at "the fine details in a living neuron," he says. "For many bioimaging applications," he adds, "scientists no longer have to resort to electron microscopy," a destructive method generally incapable of live-cell imaging.

Laser-based multiphoton methods, on the other hand, can't quite achieve this resolution, but some of them—CARS and stimulated Raman scattering microscopy, for instance—instead boast the ability to operate fluorophore-free. These techniques probe vibrational modes, such as C–H stretching motions, in molecules and have been used to image ultrafast dynamics in systems including the lipid domains in cell membranes and lipid metabolism in liver cells.

Although CARS and other laser microscopy methods don't have the tissue penetration depth of magnetic resonance imaging (MRI), the time and spatial resolution are much higher, Xie says. For this reason, he is working with collaborators to bring laser microscopy into hospital rooms and deeper into the human body by developing a CARS-compatible endoscope for cancer biopsies.

Similarly, Watt W. Webb, an applied physics professor at Cornell University, is working with collaborators to develop an endoscope for two-photon fluorescence microscopy, a technique he coinvented in 1990. Making use of intrinsic tissue fluorescence, Webb hopes to use the method for earlier detection of hard-to-diagnose conditions such as lung and bladder cancers. "There is no endoscope yet built that is geared up to work with multiphoton spectroscopy," he says. "That's where the frontier in imaging is."

Diagnostics
Fujifilm develops new imaging technology for cancer
taxonomy
Getting a bigger picture with superresolution microscopy
Analytical Chemistry
Eric Betzig, Stefan Hell, And W. E. Moerner Win 2014 Nobel Prize In Chemistry
Share X
To send an e-mail to multiple recipients, separate e-mail addresses with a comma, semicolon, or both.
Title: A View Inside Tissues And Cells
Author: Lauren K. Wolf
Chemical & Engineering News will not share your email address with any other person or company.