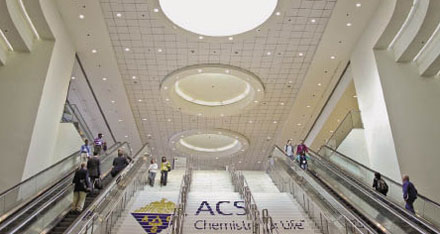 The ACS national meeting in San Francisco could be a record breaker in terms of attendance. Some 17,948 people were registered for this week’s meeting at C&EN’s press time. The total includes 9,648 regular registrants, 5,694 students, 1,214 exhibitors, 881 exhibit-only registrants, and 511 guests. With one more full day of programming to go after press time, the previous record of 18,336 was in sight.

The technical program was also huge, with nearly 12,500 technical papers presented. The meeting theme, “Chemistry for a Sustainable World,” was reflected in almost 1,600 presentations in 95 sessions programmed by 23 divisions. The well-attended exposition hosted 257 exhibitors and 387 booths.

“This programming has allowed ACS to highlight to the public, press, and government policymakers chemistry’s role in solving global challenges,” said Martin A. Abraham, chair of the ACS Committee on Environmental Improvement.

The only disappointment at the meeting was attributable to the sluggish economy. Even though 1,018 job seekers were registered, the ACS Career Fair was able to attract only 40 employers that had 116 positions posted among them. This is the third consecutive national meeting with a disappointing employer turnout. Last fall’s Career Fair in Washington, D.C., had 43 employers with 326 available jobs—and 983 candidates.

As always, the meeting brimmed with enthusiastic chemists presenting the results of their latest research. Receptions, luncheons, and dinners gave attendees time to network. And the society’s governing bodies met to hear reports and make decisions to guide ACS into the future.

At its meeting, the Society Committee on Budget & Finance reported that ACS ended 2009 in much better shape than 2008. For 2009, a net contribution from operations of $13.7 million on revenues of $460 million and expenses of $446 million was recorded. This was $3 million more on the revenue side than had been budgeted. After including the financial results of the Member Insurance Program and new ventures, ACS took in $14.6 million more than it spent in 2009, which is $5.3 million more than had been budgeted. The society’s unrestricted net assets more than doubled in 2009 to $123.9 million.

The ACS Council met to select candidates for major society offices and to discuss and vote on proposed changes to the constitution and bylaws. At the meeting, the council was introduced to three nominees for the office of ACS president-elect for 2011. Usually, there are four nominees from whom the council chooses two candidates; however, one nominee withdrew from consideration for personal reasons, and the date by which the ACS Committee on Nominations & Elections could fill the remaining slot passed (C&EN, Feb. 15, page 57).

The council also defeated the “Petition on Candidate Selection by Member Petition,” which aimed to insert language duplicating current bylaw provisions regarding petition candidacy for national elections into the ACS constitution. In addition, the council dismissed the “Petition on Election Timelines 2009,” which proposed changing the election calendar to shorten the time between candidate selection and voting.

Policy
ACS Board Actions From December Meeting
Policy
Council Preview
Policy
Elections And The Petition On Election Timelines & Procedures 2009
Share X
To send an e-mail to multiple recipients, separate e-mail addresses with a comma, semicolon, or both.
Title: Chemists Convene In San Francisco
Author: Linda R. Raber
Chemical & Engineering News will not share your email address with any other person or company.