Doubling Up On Mass Analysis

Doubling Up On Mass Analysis

Armed with high-end spectrometers, scientists can often ferret out molecules’ most subtle details. Sometimes, however, overlapping signals make it difficult or impossible for a single type of analytical tool to reveal even the most basic molecular properties, such as chemical identity. In those cases, researchers tend to double up.

“Doubling up” was exactly the focus of a polymer-analysis symposium at Pittcon 2010. Researchers there discussed the limitations of analyzing synthetic macromolecules by mass spectrometry alone and the benefits of combining mass spectrometry with ion mobility spectrometry (IMS).

Mass spectrometry methods are routinely used to determine polymer molecular weights and molecular-weight distributions, the identities of end groups, and a wide variety of other structural and compositional characteristics, according to Chrys Wesdemiotis, a professor of chemistry and polymer science at the University of Akron, in Ohio.

“On the basis of mass measurements alone, however, it is often difficult or impossible to distinguish between isobaric and isomeric components,” Wesdemiotis stressed. Those designations refer to ions that have the same mass but differ chemically (isobaric) or structurally (isomeric). In addition, electrospray ionization, a common method to ionize complex and fragile molecules such as polymers, often leads to overlap in the ionized molecules’ charge distributions, which crowds spectra and complicates mass determination.

Another challenge in analyzing synthetic polymers is that they can be complex mixtures. “Polymers are often sold by batch properties, not molecular structure,” lamented James H. Scrivens, a chemistry professor at the University of Warwick, in England. For that reason, manufacturers may choose to vary starting materials and alter formulations and reaction conditions as needed, without specifying the details of the product composition. As a result, mass spectra collected from such samples are complex and convoluted because the materials consist of products that exhibit a range of molecular weights along with a mixture of impurities and by-products. Coupling IMS to MS can help simplify the mass analysis and solve other analytical problems.

Although a few variants of the ion mobility technique are practiced currently, the methods are related in that they generally send a packet of analyte ions through a gas-filled drift tube, or cell, by applying an electrostatic push. As the ions collide with the gas molecules, the interactions lead to complex ion trajectories and a distribution of travel times through the cell that depends on the mass, charge, and shape of the ions. The dependence of ion mobility on those properties is complex, but in general, compact ions tend to move more quickly through the drift tube than elongated ones.

A few instrument makers, among them Waters and Thermo Fisher Scientific, recently began offering complete MS systems that incorporate IMS capabilities (C&EN, Sept. 15, 2008, page 11). Wesdemiotis, Scrivens, and other speakers at the session presented data measured with Waters’ Synapt and new Synapt G2 instruments, which feature an IMS device sandwiched between quadrupole and time-of-flight mass spectrometers. That configuration offers researchers the flexibility to use IMS to examine all analyte ions simultaneously or to choose ions of a given mass-to-charge ratio and analyze them selectively. It also provides a platform for mass analyzing the ions as they separate according to their drift times in the IMS cell.

A quick glance at an IMS/MS spectrum reveals the combination’s power. Lines, streaks, and other data-point groupings correspond to visibly recognizable ion families that stand out from other families because of differences in chemical composition and structure.

Demonstrating the benefits of the technique, Scrivens reported his group’s analysis of several polysorbate products used as surfactants and emulsifiers. One of the materials, known as Polysorbate 20 or Tween 20, is prepared commercially by dehydrating sorbitol and reacting the product with a carboxylic acid and ethylene oxide. Because the dehydration step can lead to a mixture of sorbitan and isosorbide and because ethoxylation is not easily controlled, Tween 20 is an ill-defined complex mixture of polymers that is “extremely unlikely” to yield even to the most advanced and time-consuming methods of chromatographic separation, Scrivens stressed. Much of its complexity can be sorted out quickly, however, by using IMS/MS. 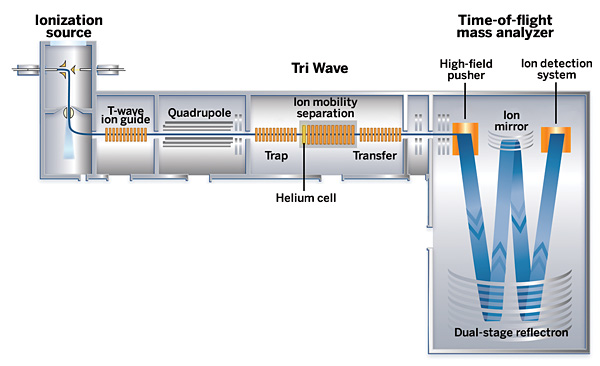 Credit: Waters
Ions traversing Waters’ Synapt G2 instrument are separated by shape, charge, and mass in a Tri Wave ion mobility spectrometer, in addition to being analyzed in quadrupole and time-of-flight mass spectrometers.

Unlike Tween 20’s convoluted mass spectrum, its IMS/MS data reveal families of ions arising from related yet distinct compounds. Analysis of those families shows that the product consists of three major components: a polysorbate monolaurate ester containing 23 OC2H4 groups; sorbitan polyethoxylate, a closely related compound that contains one less OC2H4 group and lacks the laurate (C11H23) ester unit; and isosorbide polyethoxylate, a derivative of the isosorbide that’s present in the starting material as a result of overdehydration of sorbitol. Scrivens pointed out that the same type of analysis readily reveals the composition of other “tweens,” such as Tween 40, which consists mainly of a polysorbate monoester with a palmitate (C15H31) group.

Wesdemiotis highlighted other benefits of coupling IMS to MS. For example, a singly charged ion and a doubly charged ion with twice the mass have the same mass-to-charge ratio and therefore overlap when the compounds are analyzed by MS alone. In the combined method, however, ions group according to their charge state, which separates coincident ions and simplifies analysis.

Drawing on the example of polybutylene adipate, Wesdemiotis showed that data fell into four distinct drift-time regions corresponding to +1 through +4 charge states. In addition, the +1 group was subdivided according to the number of repeat units in the oligomer and further divided according to oligomer geometry: Compact cyclic oligomers drifted more quickly than linear oligomers containing the same number of repeat units.

Taking further advantage of the sensitivity of IMS/MS to ion shape, Wesdemiotis teamed up with Akron colleague George R. Newkome, postdoc Xiaopeng Li, and graduate student Yi-Tsu Chan to examine supramolecular architectures. The researchers prepared bis-terpyridine ligands containing seven six-membered rings and treated them with a cadmium solution. The group’s aim was to form macrocyclic hexamers composed of six ligands coordinated to a total of six cadmium ions. Conventional MS analysis of the product suggests that the hexamer is indeed formed. But the possibility of overlapping signals reduces the certainty of that conclusion. For example, the MS peak at 1,187 amu could correspond to a quadruply charged hexamer, a doubly charged trimer, or both ions.

On the basis of IMS/MS analysis, the team determined that the signal at 1,187 amu arises predominantly from the 4+ hexamer—but the 2+ trimer also contributes to that signal. Furthermore, the hexamer signal consists of a large peak and a small satellite separated by a relatively small difference in drift time.

Wesdemiotis noted that the team carried out control studies with other kinds of ligands and confirmed that the larger signal corresponds to the macrocyclic hexamer. The satellite peak confirms the presence of a small concentration of the linear hexamer, which drifts more slowly than the cyclic compound. The researchers conducted similar IMS/MS deconvolutions on other overlapping signals, thereby demonstrating the suitability of the combination method to analyzing architectures of supramolecular assemblies (J. Am. Chem. Soc. 2009, 131, 16395).

IMS/MS is starting to attract devotees among analytical scientists who recognize the decisive benefits that come from coupling mass analysis with shape-dependent ion separation. As Scrivens put it, “The ability to track families of ions is one extraordinarily powerful aspect of this technique.” More generally, he added, IMS/MS offers a platform “for separating and visualizing all of these different types of compounds in one high-information-content experiment that is superior to other approaches.”