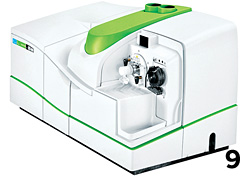 (9) PerkinElmer launched the NexION 300 inductively coupled plasma mass spectrometer, a derivative of its popular Elan series of instruments. The NexION 300 incorporates a triple-cone plasma interface and quadrupole ion deflector to create a very clean and highly focused ion beam. The key feature is PerkinElmer’s novel Universal Cell Technology, which allows three modes of operation—a first for ICP/MS. Standard mode is used for routine analyses not requiring correction for interfering ions; collision mode uses nonreactive gases to collide with and remove undesired ions for semiquantitative analyses, environmental sample monitoring, and testing unknowns; and reaction mode removes all interferences using reactive gases to achieve low detection levels for difficult-to-measure elements and matrices such as semiconductors. NexION 300 is aimed at water and wastewater testing, petrochemicals, pharmaceutical and food testing, and consumer product safety testing. The instrument’s development began as a project of the joint venture between PerkinElmer and MDS Sciex (now AB Sciex). The companies had worked together since the 1980s to make ICP/MS instruments, but at Pittcon PerkinElmer announced it had purchased Sciex’ share of the joint venture to become sole owner.

Agilent Technologies show­cased the 6150B single-quadrupole magnet liquid chromatograph/mass spectrometer, calling it a workhorse instrument for mass detection of ever-faster chromatography for higher throughput in drug discovery labs. The 6150B, which can scan at 10,000 amu per second, is the first single-quadrupole instrument from Agilent equipped with the company’s Jet Stream Technology, a unique sample inlet design that uses superheated gas to focus the ion stream entering the mass spectrometer, leading to enhanced sensitivity from a stronger signal. Agilent also introduced the 5975T Low Thermal Mass GC/MS, the industry’s first transportable GC/MS system that provides lab-quality measurements in a field instrument. Aimed at military and emergency responders, the 5975T eliminates the conventional GC oven by wrapping the GC columns with a heating element and temperature sensor, a design that shrinks the instrument’s footprint and consumes about half the power of a benchtop instrument.