[+]Enlarge
Archimedes’ MEMS chip, showing the microfluidic pathway and how the chip mounts in the instrument. 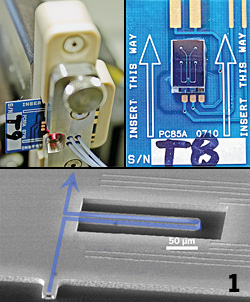 Archimedes’ MEMS chip, showing the microfluidic pathway and how the chip mounts in the instrument.

(1) The Pittcon Editors’ Gold Award for best of show this year went to the Archimedes particle-sizing instrument from Affinity Biosensors. The device provides direct measurement of the size, mass, density, and concentration of 50-nm to 5-µm particles, which are key parameters for studying silica slurries, living bacterial cells under physiological conditions, protein-coated polymer beads, and other materials in pharmaceutical, coatings, cosmetics, and biomedical research applications. Archimedes’ design is based on Archimedes’ principle, which describes how an object immersed in a fluid is buoyed by a force equal to the mass of the fluid displaced by the object. As expressed in the new instrument, particles flow through a microfluidic channel in a microelectromechanical arm that is resonating at about 400,000 Hz. When individual particles negotiate the tip of the arm, the resonance frequency change is correlated with particle size and mass to 1 femtogram resolution. The method enables analysis of a broader range of samples with better resolution than competing electrostatic methods such as Coulter counters or optical light-scattering methods.

(2) Spectro unveiled the first inductively coupled plasma mass spectrometer capable of simultaneously determining the elemental contents and isotope ratios of a sample over nearly the entire periodic table, from lithium to uranium. Spectro is known for ICP optical emission spectrometers, such as its flagship instrument, the Spectro ARCOS. But until now, Spectro didn’t offer a mass spectrometer detector. The Spectro MS, which took home the Pittcon Editors’ Silver Award, uses an ion analyzer with double-focusing geometry that narrows the sample ion beam before it passes through a magnetic field for mass separation. In traditional ICP/MS instruments, the ion beam is scanned and the mass of each isotope determined sequentially. In the Spectro MS, the analyzer focuses separated ions onto a planar semiconductor direct-charge detector, which consists of 4,800 dual-stage channels that record the entire spectrum up to 240 amu all at once—210 isotopes of 75 elements. The instrument runs about three times faster than conventional ICP/MS instruments to streamline measurements for geological, environmental, forensic, and pharmaceutical laboratories. 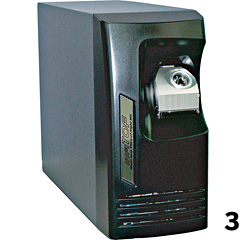 (3) MSI Tokyo garnered the Pitt­con Editors’ Bronze Award for the infiTOF, which incorporates new technology that dramatically shrinks the size of a time-of-flight mass spectrometer while maintaining high mass resolution. The portable infiTOF, about the size of a small microwave oven, combines an electron ionization source, novel multiturn TOF analyzer, and detector. Developed at Japan’s Osaka University, the multiturn “orbi-electrode” TOF analyzer includes four electrostatic toroidal sectors positioned to bend the sample ion beam multiple times, forming a crisscrossing loop in which the ion beam cycles multiple times. This design creates an “infinite” ion flight path in a small space, providing high mass resolution. The orbi-electrode includes two additional toroidal sectors that inject ions into and out of the loop. The infiTOF has direct injection or gas chromatograph interface capability with a mass range up to 1,000 m/z and resolution of 30,000 full-width half-maximum.