Credit: courtesy of the Shuttle & Find
An optical image of sandstone (left), an SEM image (center), and overlaid images (right).

Thermo Fisher Scientific put on display its usual broad portfolio of instruments, including the latest enhancements to its flagship LTQ Velos and LTQ Orbitrap Velos mass spectrometers aimed at proteomics and the Exactive benchtop LC/MS aimed at complex samples containing pesticides and metabolites. Thermo also demonstrated its new LIMS-on-Demand, a first-of-its-kind Web-based laboratory information management system. Available for a monthly subscription fee, LIMS-on-Demand is a fully functional LIMS that allows users to create workflows, monitor sample life cycles, process lab data, and connect with external facilities such as regulatory agencies. It’s geared toward helping small and mid-sized labs save time and money but still have access to a LIMS system. In another development, Thermo completed the purchase of Ahura Scientific just days before Pittcon began. In the exhibit hall, Ahura-turned-Thermo technicians demonstrated a new generation of the FirstDefender line of handheld Raman spectrometers, which are designed for point-and-shoot identification of unknown solids and liquids for emergency personnel, law enforcement, and military use. The new instruments, which sport a library of more than 10,000 substances, weigh about 2 lb. They are about half the size and weight of the original FirstDefender, launched in 2005, and with updated electronics are five times faster.

Imaging company Carl Zeiss presented the Shuttle & Find correlative microscopy system that relocates regions of interest after switching samples between light and electron microscopes. The “shuttle” is a specially designed stage for transferring samples without dismounting or altering them. The “find” is AxioVision software that pinpoints a region of interest once a sample has been switched from one microscope to another, avoiding time-consuming manual searching. For example, a region of interest in a sample under an optical microscope can quickly be relocated and examined at higher resolution in an SEM, or vice versa. The software stores up to 100 regions of interest per image and has an overlay function that matches features from the two images for correlation analysis of materials and biological samples. At Pittcon, attendees who happened to have a sample in their pocket were able to mount them in the Shuttle & Find and test it out using Zeiss’s Axio Imager 2 optical microscope and Sigma VP SEM with energy-dispersive X-ray spectrometer attachment. 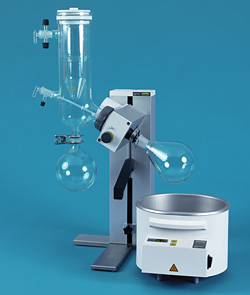 Büchi highlighted new editions of its Rotavapor instruments: the Rotavapor R-3 laboratory evaporator (shown) and the Rotavapor R-220 SE industrial evaporator. First commercialized by Büchi in 1957, rotary evaporators are a staple of all synthetic labs for solvent distillation, drying, and concentration applications. The R-3 is a revised version of the classical lab rotavap that includes features from more advanced models, such as digital heating bath, stopcock for adding solvent or vacuum control, and a one-handed manual lift for quick height adjustment. The R-220 SE, Büchi’s 20-L rotavap, has been upgraded after 10 years on the market. New features include a solvent-level sensor in the receiving vessel that automatically determines the endpoint of distillations to minimize observation time, and a USB module for recording data and interfacing with peripheral equipment on large-scale evaporations. Büchi also announced the launch of the Büchi WebStore, an online market for customers in the U.S. and Canada to locate and purchase Büchi products.