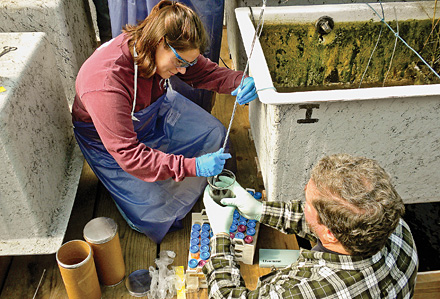 Materials with dimensions on the nanometer scale have a wide range of po­ten­tial applications, from medicine to consumer products. With so many opportunities for nanomaterials to get into humans, either deliberately as medicines or unintentionally as environmental contaminants, scientists have many questions about their toxicity. A symposium at Pittcon looked at the ways analytical chemistry is helping to address those questions.

One way people could be exposed to nanoparticles is through inhalation during manufacture. David B. Warheit, a DuPont toxicologist, explained how such particles are usually cleared from the lungs. If the particles are small enough, they deposit at the end of the tiny airways in the lung near a structure called the alveolar duct bifurcation, he said. Macrophages—white blood cells that serve as garbage collectors in the blood—ingest the particles and are carried along an airway structure called the “mucociliary escalator” to be subsequently coughed out or swallowed.

Using pulmonary bioassays in rats, Warheit assessed the hazards of nanoparticles of different materials and shapes. For example, he expected that the greater surface area per gram of TiO2 nanodots would make them more toxic than larger TiO2 particles. To his surprise, they weren’t. Both types of particles elicited an initial inflammatory response that was resolved within a week. “Surface area may not matter,” he said.

In contrast to the short-term effect of TiO2 particles, quartz nanoparticles trigger a sustained inflammatory response that lasts for months, Warheit said. But they elicit about the same levels of pulmonary toxicity as microscale quartz, which is already quite toxic, he found.

“We cannot assume that nanomaterials are the same as the bulk, but we also can’t assume that they are more, or less, toxic,” Warheit said. “Each particle type should be tested on a case-by-case basis.”

But doing individual bioassays in animals for every nanomaterial would cost millions of dollars, said Brian D. Thrall, associate division director of the Biological Sciences Division at Pacific Northwest National Laboratory. Systems-level approaches are needed to identify and, more important, predict the hazards of nanomaterials, he said. Such information could be used to prioritize animal-based toxicity tests.

Using “-omics” technologies such as gene expression arrays and mass-spectrometry-based protein analysis, Thrall and a team of researchers at PNNL are developing methods to assess which biological pathways are activated when human cells are exposed to nanoparticles.

Unfortunately, such techniques are biased in terms of the cellular processes they measure, he said. Microarrays tend to report processes that are transcription controlled, whereas mass spectrometry is biased toward processes that are controlled by abundant proteins, and antibody-based techniques are biased toward processes governed by signaling events such as phosphorylation, Thrall explained. Thus, agreement among the different types of measurements can be hard to come by.

Protein Halo
[+]Enlarge
Credit: Courtesy of Francesca Baldelli Bombelli
In plasma, nanoparticles are surrounded by a corona of proteins. In situ (left), a weakly interacting protein outer layer rapidly exchanges with proteins in the plasma. When the complexes are isolated from plasma and carefully washed, only a slowly exchanging “hard” corona of proteins with sufficiently long residence times remains. 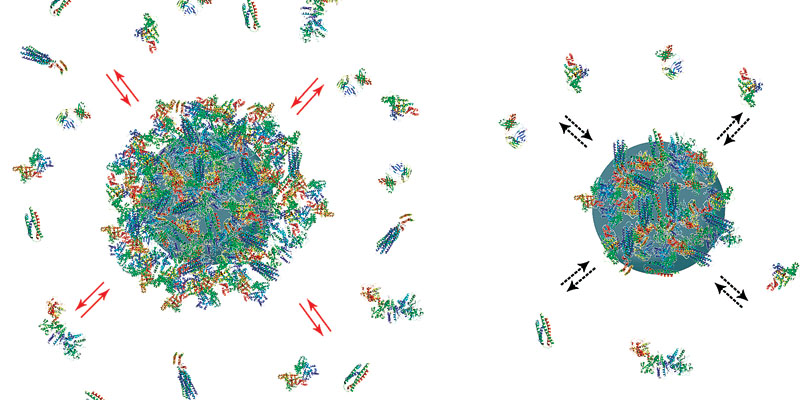 Credit: Courtesy of Francesca Baldelli Bombelli
In plasma, nanoparticles are surrounded by a corona of proteins. In situ (left), a weakly interacting protein outer layer rapidly exchanges with proteins in the plasma. When the complexes are isolated from plasma and carefully washed, only a slowly exchanging “hard” corona of proteins with sufficiently long residence times remains.

Another key problem is that most of the techniques make static measurements of dynamic processes, Thrall said. Nevertheless, he was able to obtain some time-course information by using mass spectrometry with accurate mass tags and a “time tag” approach in which a stable-isotope-labeled amino acid is included in the cell culture. Analysis of peptides that incorporate the label provides some dynamic information about the proteome, because nanoparticle treatment causes delays in the synthesis of some proteins, but not all, he said.

A major protein involved in clearing nanoparticles is called scavenger receptor A, Thrall said. Microscopy analyses revealed that this protein, found on the macrophages in blood, takes up more than half of silica nanoparticles up to ~500 nm, he said. The nanoparticles bind to clusters of positively charged arginine and lysine residues that form when the receptor folds.

Such information could help scientists design new particle surfaces that better target or evade the receptor, depending on whether they want to curtail or prolong the nanoparticles’ circulation time in the system. Thrall is changing the toxicity of silica nanoparticles by modifying their surfaces and then using those modified nanoparticles to construct QSAR (quantitative structure-activity relationship) models that relate particle structure to biological responses. QSAR models have had only limited success so far because of the complexity of the interactions involved, he said.

When nanoparticles circulate in blood, they are surrounded by a “corona” of proteins, said Francesca Baldelli Bombelli, a senior postdoctoral researcher working with Kenneth Dawson at University College Dublin. Bombelli and her colleagues are using proteomics measurements to understand the interactions of nanoparticles with proteins and their impact on nanoparticle uptake by cells.

The protein corona surrounding a particular nanoparticle depends on a number of parameters, including particle composition, morphology, size, charge, the duration of exposure, and plasma concentration, Bombelli said. Whether the protein corona just helps make particles biocompatible or the composition of the corona in some way matters for the cellular machinery that processes the nanoparticles is still an open question, she said.

One important aspect of the interaction between proteins and nanoparticles is how tightly the proteins bind the particles. Quantitative comparisons of the binding of proteins to nanoparticles with different physicochemical properties could lead to better understanding of the formation of the protein corona and its dependence on particle properties, said Wenwan Zhong, assistant professor of chemistry at the University of California, Riverside. Proteins tightly bound to nanoparticles may also be more vulnerable to chemical damage from the high surface activity of nanoparticles, she added.

Zhong and her coworkers measure the binding affinity of proteins with several types of gold and iron oxide nanoparticles by capillary electrophoresis, which doesn’t perturb the interaction. Treating the nanoparticles as receptors and the proteins as ligands, Zhong quantifies the fraction of binding sites on nanoparticles occupied by proteins. The binding behavior can then be described by the Hill equation, which provides information about the apparent dissociation constant and the cooperativity of binding. If the so-called Hill coefficient is less than one, the interaction is negatively cooperative and the binding of one protein makes it harder for subsequent proteins to bind.

Most nanoparticles in Zhong’s study showed strong affinity to proteins. Smaller particles seemed to bind proteins more strongly, but the study found no clear trend in the dissociation kinetics of nanoparticles and proteins according to size and type, Zhong said. Although β-casein exhibited slow dissociation kinetics with 8-nm iron oxide nanoparticles, most combinations in Zhong’s admittedly small study showed fast kinetics. Zhong also finds that the Hill coefficient is typically greater than one, which means that after one protein binds, other proteins find it easier to do likewise.

In addition to moving through individual organisms such as humans, nanoparticles can move through entire ecosystems. Catherine J. Murphy, a chemistry professor at the University of Illinois, Urbana-Champaign, is involved in a project with the National Oceanic & Atmospheric Administration to study the effects of nanoparticles in Charleston Harbor, S.C. This work is in collaboration with a group of scientists at the University of South Carolina.

In tanks set up to simulate the conditions of the harbor, including the tides and representative organisms, the researchers added gold nanorods at a concentration of 42,500 ppb (in atoms). After two weeks, they used inductively coupled plasma mass spectrometry to measure where the gold went.

They found no deleterious effects on the organisms in the tanks. And they found the most gold first in microbial biofilms and then in clams. These data indicate that microbes and clams are the likely points of entry into the ecosystem, Murphy said. The microbial biofilms are a major food for snails, so Murphy was surprised that they found almost no gold in snails. They may have missed gold in the snails because the students didn’t analyze snail feces, Murphy joked.

The studies reported in the symposium looked at the hazards of nanoparticles, but Warheit reminded the audience that hazard is only part of the story. “We are studying the hazards,” he said. “Others have to look at the exposure.”