Insights: Regulators travel to the heartland to examine competitive practices of agbiotech firms 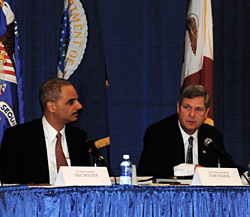 On March 12 in Ankeny, Iowa, the Department of Justice and the Department of Agriculture held an unusual public workshop. An overflow crowd of more than 700 people packed a community college auditorium for panels discussing whether anticompetitive business practices in the agriculture industry—by seed companies, meat packing firms, and even retailers—are hurting American farmers and consumers.

On the eve of the workshop, a large crowd of farmers, ranchers, and union workers attended a community meeting to gain more time to air their views. Most had gray hair—the average age of U.S. farmers is 57—and they spoke about how it feels to live in rural communities that are shrinking as small and medium-sized farms disappear. To them, it seems unlikely that their children or grandchildren will be able to farm.

Fred Dauer, a seed dealer who also farms 800 acres in Redwood County, Minn., told C&EN that his customers are concerned about steep increases in the price of seeds. “This year, more than any other,” he said, “my customers’ worry is that the cost of seed is so high because there is no competition.”

Monsanto’s prize for being first out of the gate has been a staggering market share. It now has 98% of the market for genetically modified soybean traits and 79% of the market for corn traits. But Monsanto’s aggressive investigations and lawsuits against farmers suspected of running afoul of the firm’s technology agreements, for example by saving seed, are at the root of many farmers’ complaints.

In addition, although biotech traits have brought higher yields, they have also kicked off a tremendous increase in seed prices. Since 1999, prices have risen 146%, with 64% of that rise occurring during the past three years, according to USDA.

Hence the trip to the Iowa workshop by Attorney General Eric H. Holder and Agriculture Secretary Tom Vilsack. The session—the first of five scheduled in 2010—could not have come at a better time. In 2014, first-generation Roundup Ready technology will come off patent, and Monsanto’s competitors and customers want to know how generic competition could help to unwind Monsanto’s near-monopoly.

At the hearing, Vilsack lamented that 50% of rural communities have shrunk since the last census. He acknowledged that corporate consolidation has led to efficiencies and lower prices for food. But he asked, “Are farmers and ranchers getting a fair shake?”

Holder, in his remarks, took his cue from the recent banking crisis to warn about the risks of corporate consolidation. “We’ve learned the hard way that recessions and long periods of reckless deregulation can foster practices that are anticompetitive and even illegal,” he said.

In January, Monsanto revealed that it is cooperating with a DOJ investigation of anticompetitive business practices in the seed industry, yet the firm vigorously defends its behavior. Monsanto points out that the biggest factor in its success was its investment in risky new genetic engineering technology decades before competitors understood its value. And it has since licensed Roundup Ready technology to scores of competitors and seed companies.

Meanwhile, those competitors, including DuPont, Dow Chemical, Bayer CropScience, BASF, and Syngenta, are spending billions on seed trait innovations. But for almost every seed they sell, Monsanto still makes money, because these firms’ traits are stacked along with the now-standard Roundup Ready gene.

DuPont has been a particularly vocal critic of Monsanto, accusing it of benefiting from overly broad patent protection and license restrictions that prevent competitors from bringing innovative multitrait seeds to market. Also irritating to DuPont is that Monsanto has moved into the retail seed business and now controls the majority of corn, cotton, soy, canola, and vegetable seed companies. DuPont is pressing the government to ensure that Monsanto does not use its patents and vertical reach to extend its monopoly into the future.

The farmers at the workshop share DuPont’s concerns. They loudly applauded when Christine A. Varney, chief of DOJ’s Antitrust Division, said she cares deeply about market transparency and competition. In the biotechnology arena, she observed, “patents have been used to maintain or extend monopolies, and that’s illegal.” She added, “With ‘big’ comes a lot of responsibility. When you have a large market share, you can’t engage in acts that protect a monopoly.”

But as much as it might like to, the Obama Administration cannot turn back the clock. The most important chore facing the regulators is to devise a clear road map for the introduction of generic seed traits. While they ponder this challenge, Monsanto will be using every method at its disposal to move its vast customer base to its new, patented—and more expensive—Roundup Ready 2 Yield seeds.