CLIMATE TALK
[+]Enlarge
Participants in the Asilomar International Conference on Climate Intervention Technologies discussed geoengineering from morning until well into the evening. 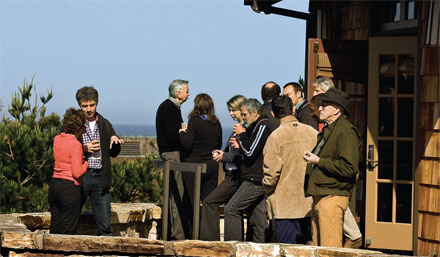 Participants in the Asilomar International Conference on Climate Intervention Technologies discussed geoengineering from morning until well into the evening.

They came from all over the world, although mainly from the U.S. and the U.K., boasting expertise from the natural and social sciences to law, engineering, and the humanities. Some 175 people sequestered themselves for five days at the Asilomar Conference Grounds on the California coast with a singular topic for discussion: geoengineering. At three communal meals each day and in morning, afternoon, and evening sessions, they wrestled with a host of factors that should guide research, field tests, and perhaps, eventually, deployment of technologies that could place Earth’s climate thermostat under human dominion.

Organizers of the Asilomar International Conference on Climate Intervention Technologies, held on March 22–26 in Pacific Grove, Calif., hope the meeting will replicate the historic influence of a previous scientific gathering at the same venue. That was the 1975 Asilomar conference that established the first voluntary biosafety guidelines for experiments involving genetically modified organisms.

The recent conference will provide suggestions for guidelines to govern research on geoengineering. Coordinators of the conference are still amalgamating a summary document, says Michael MacCracken, who chaired the scientific organizing committee for the conference. That work product, initially expected in April, will be completed in coming weeks, he says. Also, many participants are likely to write papers to be published in various journals in response to the discussions at Asilomar, he adds.

“There was some important agreement for a governance structure to exist if you’re going to make significant progress and undertake significant experiments,” says MacCracken, chief scientist for climate-change programs at the Climate Institute, a nonprofit group focused on raising awareness of global warming and identifying practical ways to cut greenhouse gas emissions. Participants had divergent views on what would constitute a “significant” field test of geoengineering technology, he adds.

Discussion of geoengineering has become more intense in recent months. In part, this has been exacerbated by the failure of last December’s climate conference in Copenhagen to produce a binding international treaty on greenhouse gas emissions (C&EN, Jan. 11, page 27). Meanwhile, researchers and investors have shown growing interest in ways other than emissions controls to temper human-induced global warming.

The Asilomar conference emphasized the need for emissions reductions and adaptation to unavoidable climate change. But it also recognized that emissions control efforts thus far have been limited. This has resulted in rising atmospheric levels of greenhouse gases that could lead to potentially significant shifts in climate. Noting these, the meeting ended in a call for research in a wide variety of disciplines to determine whether alternative strategies to restrain climate change are viable, appropriate, and ethical. 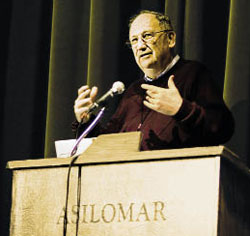 Those alternative strategies are collectively called geoengineering. They generally fall into two categories. One encompasses methods to strip carbon dioxide from the atmosphere, either by biological or chemical means, for storage under land or sea or to convert the gas into minerals or hard-to-decompose organic material. This also includes plans to fertilize the oceans, triggering massive blooms of algae that would take up CO2, die, and—at least hypothetically—drift to the bottom of the ocean, where their minute carcasses and the carbon they contain would be locked away for centuries. As climate intervention techniques, these methods are seen as sure, slow, and relatively expensive.

The second category comprises technologies that would be faster, cheaper, and potentially riskier than CO2 removal. They would cool the planet by lessening the amount of sunlight that hits Earth’s surface by increasing reflection of these rays into space. Solar radiation management ideas include injecting aerosols into the stratosphere, launching reflectors into orbit, or inducing the formation of thicker, larger clouds. These methods would do nothing about the growing acidification of the ocean due to the seas’ uptake of atmospheric CO2, and some could alter precipitation patterns in some parts of the world.

Although participants did discuss various ideas and proposals for geoengineering, the Asilomar meeting was primarily a giant brainstorming session on how this work should be governed. Overall, conference attendees “agreed that decisions about research into techniques to deliberately manipulate the climate must be a product of extensive engagement with civil society, with ultimate decisions made by governments,” according to participant David Hawkins, director of climate programs at the Natural Resources Defense Council, an environmental group.

The biggest governance challenge will be restraining countries—or private enterprises—that want to experiment with geoengineering, Scott Barrett, professor of natural resource economics at Columbia University, told the conference. This is particularly true for solar radiation management techniques, which could be seen as a cheaper policy option than reducing emissions from the use of fossil fuels.

CO2 removal efforts, except those that involve fertilizing broad swaths of the ocean, will pose less of a governance problem in part because their costs are expected to be much higher, Barrett said. In addition, full-scale use of technologies to remove CO2 from the atmosphere raises virtually no concern because it is substantially the same as stripping the gas out of emissions from coal-fired power plants for storage, argued M. Granger Morgan, head of the department of engineering and public policy at Carnegie Mellon University.

But solar radiation management is substantially different from CO2 removal, Morgan told the conference, arguing that this type of research needs to be conducted openly and transparently. He advocated that this work take place under the aegis of government agencies such as the National Science Foundation, the National Aeronautics & Space Administration, and the National Oceanic & Atmospheric Administration. Research in solar radiation management should not be done secretly by militaries or the intelligence community, he contended. In addition, private, for-profit organizations should be discouraged from conducting solar radiation management R&D because once they have developed capability, they are likely to form groups that will lobby for deployment because they have workable technology, Morgan said.

A number of participants expressed worry that public and private funding for geoengineering research could siphon off money that otherwise would go toward reducing greenhouse gas emissions. Plus, if countries provide R&D money for geoengineering techniques, particularly solar radiation management, they will want to actually use their techniques to gain return on their investments, said Elizabeth L. Chalecki, visiting assistant professor of international studies at Boston College. This in turn will provide an incentive for policymakers—and the public—to substitute geoengineering for cuts in greenhouse gas emissions, she said.

Research is likely to lead to deployment of geoengineering, raising the issue of how much global cooling these technologies should be allowed to induce, said Dale Jamieson, director of the environmental studies program at New York University. Views on what a “correct” human-controlled global temperature should be are likely to differ throughout the world, he said. Countries with cooler climates, such as Canada or Russia, might welcome a warmer planet, he pointed out. “If it real­ly were possible for us to turn the climate thermostat, why should we reset it to the current climate regime?” Jamieson asked.

Some participants also raised ethical concerns about the billions of people who are unaware of climate change—much less plans for geoengineering—especially those living in areas that may experience adverse effects such as increased drought from some solar radiation management efforts. Others raised questions about how sun-blocking techniques might adversely affect agriculture or conservation efforts by depressing the rate of photosynthesis and thus lowering the productivity of ecosystems. Still others noted that widespread use of CO2 removal efforts could put pressure on governments to convert protected lands such as national parks to this use.

The possibility—or probability—of geoengineering research leading to the formation of new industries also needs consideration, Jamieson said. When scientists met at Asilomar in 1975 to discuss recombinant DNA, “they had no idea about the pharmaceutical-industrial-medical complex they would be involved in creating,” he said. “We’re only beginning to get a glimpse here of the potential of earth science-industrial complex that may be created 10, 20, 30 years down the line.”

For instance, “climate restoration” might be a better expression than geoengineering, suggested Charles Zender, professor of earth system science at the University of California, Irvine. Although this isn’t a perfect description, he said, “the goal of the term is to describe intent without being overly technical.”

Some participants drilled down further. Solar radiation management is sometimes described as “planetary sunscreen,” but the phrase “sun fender” would be more accurate, said Daniel Rosenfeld, chair of the atmospheric sciences program at the Hebrew University of Jerusalem. Sunscreens absorb some sunlight, he explained, but like shiny chrome fenders, technologies proposed to reflect sunlight would not.

Nonetheless, the conference did not endorse any alternative, and most participants stuck with the term “geoengineering” in their discussions. A concluding statement from the conference organizers avoided the term, instead using “climate intervention technologies.”

The conference was put together by the Climate Response Fund, a nonprofit organization with a mission to “foster safe and responsible research on climate intervention,” in partnership with Guttman Initiatives, a philanthropic group with a goal of assimilating social responsibility into current lifestyles. The Alexandria, Va.-based fund says it has no plans to finance field experiments.

Climate Change
Will the world ever be ready for solar geoengineering?
Environment
National Research Council Advocates Carbon Dioxide Emissions Cuts Before Geoengineering
Environment
Climate Change Is Altering The World
Share X
To send an e-mail to multiple recipients, separate e-mail addresses with a comma, semicolon, or both.
Title: Guidelines For Geoengineering R&D
Author: Cheryl Hogue
Chemical & Engineering News will not share your email address with any other person or company.