In the wild:
[+]Enlarge
Credit: Wildlife Conservation Society
A researcher in Guatemala uses Obsession for Men to draw jaguars to a camera. 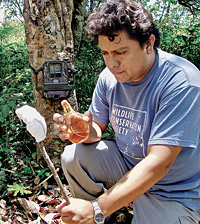 Credit: Wildlife Conservation Society
A researcher in Guatemala uses Obsession for Men to draw jaguars to a camera.

According to its advertising literature, Calvin Klein’s Obsession for Men is an “intensely provocative scent that is a masculine blend of botanics, spices, and rare woods that reflects the determination and fire that drive men’s passions.” With claims like that, one certainly wouldn’t blame a man for wanting to test the cologne’s purported sexual-attractant powers. However, he might not want to conduct that research when embarking on his next safari vacation.

It turns out that the scent is irresistible to the likes of tigers, cheetahs, jaguars, and other big cats—something that wildlife conservationists are using to their advantage.

The FELINE ATTRACTION for Obsession for Men was discovered by Pat Thomas, general curator for the Wildlife Conservation Society’s Bronx Zoo, in New York. Knowing that certain scents can pique animals’ interests, he decided to test the effects of 24 different fragrances on two cheetahs.

Thomas found that some colognes captured the animals’ attention for only seconds, but Obsession for Men kept them lingering for more than 10 minutes.

Those findings have been helpful to environmental activists throughout the Wildlife Conservation Society’s global network. Obsession for Men is now being used as an attractant to encourage cats in the wild to linger in front of heat- and motion-sensitive cameras, allowing researchers to capture more photos of the animals. As a result, conservationists can better identify individual cats by their unique spot patterns, helping them to more accurately estimate animal populations.

Since beginning his cologne-related research in 2003, Thomas says that he has gained little insight into the biochemistry behind the big cats’ attraction to certain colognes. Fragrance makers won’t share much information about their product formulations, he says, except to identify cologne base notes. That information has led Thomas to hypothesize that musk-based scents such as Obsession for Men elicit the most powerful responses.

With that in mind, the society’s Jaguar Conservation Program hopes to use the pricey fragrance in upcoming population studies in Venezuela, Nicaragua, Bolivia, Peru, and Ecuador. In addition to welcoming Obsession for Men donations, the society’s researchers remain on the prowl for special deals on the cologne in duty-free shops.

Although some companies develop scents that might be attractive—sometimes to both man and beast—other firms in the personal care industry are committed to helping people look better.

With swimsuit season in full swing, DermaGenoma has developed a new GENETIC TEST that can tell a woman whether she is likely to develop cellulite—those fatty deposits beneath the skin that give its surface a lumpy appearance.

DermaGenoma, an Irvine, Calif., molecular dermatology company, has just released the CelluliteDX Genetic Test for Moderate to Severe Cellulite. The $249 analysis helps doctors predict whether a patient is at high risk for developing cellulite, which remains largely untreatable. The information allows doctors to develop a plan to slow or stop development of severe cellulite and improve the skin’s appearance. The plan might include therapy and lifestyle changes such as increasing exercise or avoiding certain medications.

CelluliteDX reports the presence or absence of a specific variation in the gene coding for angiotensin I-converting enzyme (ACE). A patient testing positive for the ACE variant has about a 70% chance of developing moderate to severe cellulite at some point.

The patent-pending CelluliteDX genetic test is available through doctors, who collect a genetic sample with a cheek swab. The sample is then mailed to Derma­Genoma’s laboratory for analysis. Results, which are strictly confidential, are delivered to doctors in two to three weeks.