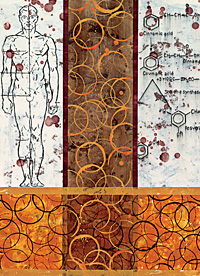 Credit: Taylor Anne Smith
One of the paintings in Smith’s still-life series.

A couple of months ago, the Newscripts gang was bemoaning the fact that although art is often the inspiration for chemistry, chemistry is rarely the inspiration for art (C&EN, May 17, page 48). Since then, several readers have written in to tell us about ARTWORK that’s chemically inclined. 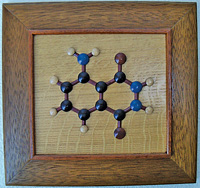 Gregory L. Durst of Indianapolis got us hooked on Taylor Anne Smith’s work  (abstractmodern.com), which incorporates chemistry in abstract art. Her “Chemical Still Life” series of paintings, for example, weds chemical structures with objects depicted in traditional Dutch still life—a skull, a wine bottle, a smoking candle. “Chemical detail adds a layer of composition and nods to the possible meaning and relationship between certain subjects,” Smith says of the paintings.

Although the artist has no formal education in chemistry, she tells Newscripts that she thinks it’s important that the chemical structures she uses in her paintings are both accurate and relevant. “I try not to just make up things and draw random chemistry structures,” she says. For example, she has several patrons who live in California wine country, so she’s learned some of the chemistry of the fermentation process and included it in her work.

“I feel that the scientific study of the structure, properties, composition, reactions, and preparation of carbon-based compounds, hydrocarbons, and their derivatives can have a direct visual relationship to abstract contemporary art,” Smith says. “By incorporating structurally diverse organic compounds into my art, I feel I’m more able to convey meaning.”

We also heard from chemists who are artists on the side. C. Shawn McCowan, an associate dean at the University of Phoenix, sent us pictures of his molecular woodcuts. For each element, McCowan uses a specific type of wood. Carbon is ebony, hydrogen is maple, sulfur is Brazilian satinwood, oxygen is bloodwood, sodium is pink ivory, and nitrogen is blue-dyed maple.

Although woodworking has been his hobby for 17 years, McCowan has only recently started to make molecules the subject of his artwork. “I started building the molecules while I was teaching the organic chemistry labs at Arizona State University,” he says. Encouragement from his students and the faculty there drove him to make more. “Since I was teaching organic chemistry, my subject matter represented organic molecules,” he explains. “My ultimate goal was to make a desk with three large, three-dimensional molecules inlaid on the top—the molecules were ones that I synthesized and had the crystal structure solved back in grad school.”

For readers who are also artistically inclined, the Newscripts gang would like to direct your attention to two upcoming COMPETITIONS that are seeking artistic representations of chemistry. Shutterbugs should click over to C&EN Online to learn the details of our humble magazine’s inaugural photo competition. Winning pictures on the theme “Your Science Up Close” will be printed in the magazine, with cash prizes going to the top photographers.

For those of you who have been known to shake your groove thing while shaking your separatory funnel—and you know who you are—the folks at Science magazine are once again holding the “Dance Your Ph.D.” contest, in which samba-savvy scientists depict the subjects of their Ph.D. theses in dance form. For the first time, the contest is divided by discipline, and chemistry has a whole category to itself. So shine up those dancing shoes and get the steps on how to enter at gonzolabs.org/dance.

Education
New international students cannot enter US for online-only programs
Education
Chemistry-style fun and games
Undergraduate Education
Block plan compresses one class into a few weeks for deeper learning
Share X
To send an e-mail to multiple recipients, separate e-mail addresses with a comma, semicolon, or both.
Title: Chemistry Inspiring Art
Author: Bethany Halford
Chemical & Engineering News will not share your email address with any other person or company.