Behind A Metal Makeover

ACS Meeting News: To ensure their survival, pathogenic bacteria turn to manganese, not iron, when making an essential metalloenzyme

Injection Site
[+]Enlarge
Credit: Adapted from Science
NrdI (green) injects a peroxide species generated from O2 at its flavin cofactor (yellow) via a tunnel (blue mesh) into the RNR's active site. There, the peroxide species oxidizes the enzyme's Mn2 cofactor (purple spheres) which in turn creates a stable radical on a nearby tyrosine (pink) and activates the enzyme. 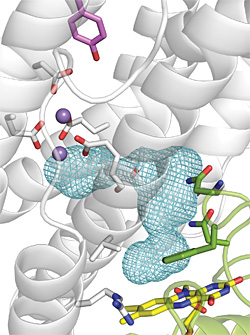 Credit: Adapted from Science
NrdI (green) injects a peroxide species generated from O2 at its flavin cofactor (yellow) via a tunnel (blue mesh) into the RNR's active site. There, the peroxide species oxidizes the enzyme's Mn2 cofactor (purple spheres) which in turn creates a stable radical on a nearby tyrosine (pink) and activates the enzyme.

Accurately determining which metals a given metalloenzyme uses in its daily work can be tricky business, with in vitro experiments not always reflecting what truly happens inside cells. At this week's American Chemical Society national meeting in Boston, chemists told a cautionary tale: By taking a closer look at the machinery bacterial cells use to build the active site of a ribonucleotide reductase, these researchers have redefined which metal makes this enzyme tick.

Found in all organisms, ribonucleotide reductases (RNRs) are essential for making and repairing DNA. They supply the deoxyribonucleotides that make up DNA by using a cysteine thiyl radical to initiate replacement of a hydroxyl on the ribose ring of the corresponding ribonucleotide with hydrogen.

Escherichia coli and some other pathogenic bacteria make two different kinds of RNRs. Both were long thought to rely on a diiron cofactor to generate a stable tyrosine radical that in turn creates the catalytic cysteine thiyl radical.

But one of these putative diiron enzymes is actually a dimanganese enzyme, reported enzymologist JoAnne Stubbe of Massachusetts Institute of Technology, in a session sponsored by the Division of Biological Chemistry. She and grad student Joseph A. Cotruvo Jr. published spectroscopic and biochemical evidence for the existence of the dimanganese RNR in E. coli earlier this year (Biochemistry 2010, 49, 1297).

Being able to make a manganese-dependent RNR may come in handy when pathogenic bacteria encounter challenging conditions—for example, when they are camped out in a human host, where available iron is scarce and oxidative threats abound. Under such conditions, they may well scuttle their normal diiron RNR in favor of a dimanganese RNR, Stubbe said.

Indeed, Cotruvo has managed to isolate active dimanganese RNR from a strain of E. coli lacking the machinery needed to take up iron, she reported. And last month, a German team published spectroscopic and crystallographic evidence that Corynebacterium ammoniagenes, a bacterium that makes its home in the human intestine, also makes a dimanganese RNR (J. Am. Chem. Soc., DOI: 10.1021/ja1036995).

Relying on manganese instead of iron comes at a cost. All that E. coli's diiron RNR requires to generate the critical thiyl radical is O2, Stubbe noted. The O2 oxidizes the diiron center, which then generates a stable tyrosine radical that in turn creates the catalytic thiyl radical. But "unlike iron, manganese cannot be oxidized by O2," she added. As a consequence, E. coli must supply its dimanganese RNR with an accessory protein that can safely deliver a stronger oxidant.

Two Flavors
[+]Enlarge
Credit: Adapted from Science
E. coli's dimanganese RNR enzyme can bind both Mn (purple) and Fe (orange). Although the metals bind to the same active-site amino acid residues, the metal coordination environments are distinct. The tyrosine where a radical must form to turn the enzymes on is shown in pink.

Credit: Adapted from Science
E. coli's dimanganese RNR enzyme can bind both Mn (purple) and Fe (orange). Although the metals bind to the same active-site amino acid residues, the metal coordination environments are distinct. The tyrosine where a radical must form to turn the enzymes on is shown in pink.

Stubbe and Cotruvo recently teamed up with Northwestern University crystallographer Amy C. Rosenzweig and postdoc Amie K. Boal to probe how NrdI manages this feat. At the ACS meeting, Rosenzweig described the team's efforts to obtain structures of the manganese RNR bound to NrdI. With these structures, the researchers were able to pinpoint within the protein-protein complex the location of the flavin cofactor that NrdI uses to produce the peroxide species from O2. The work was published in Science earlier this month (DOI: 10.1126/science.1190187).

The researchers even managed to map the tunnel through which NrdI injects the peroxide species into the RNR's dimanganese active site. In one structure, a species resembling a peroxide is lodged inside this tunnel. "The binding site for this trapped species provides clues into how the protein-protein complex might ensure safe passage of a highly reactive oxidant to the active site," Rosenzweig says.

The fact that this dimanganese RNR was so long assumed to be a diiron enzyme emphasizes that in vitro self-assembly of metalloproteins may not always reflect the proteins' true composition inside cells, Stubbe noted. In earlier studies, scientists found that the enzyme would assemble in vitro with either diiron or dimanganese in the active site. But NrdI, required to activate the dimanganese version, was always absent. As a consequence, scientists detected enzymatic activity only in the diiron version and the RNR was branded a diiron enzyme.

Stubbe told C&EN that this is the only example she knows of in which a single protein can use two different metals and two different oxidants to do the same chemistry.

"Our results will open many scientists' eyes to the complex and intriguing nature of metallocofactor biosynthesis in general," Rosenzweig added. NrdI is just one example of the sophisticated biological machinery that organisms use to install and activate the appropriate metal cofactors in metalloproteins, she added.

Dimanganese RNRs might also point the way to new antibiotics. Human pathogens may have evolved these enzymes to outwit their host's immune response, Bollinger suggested. As such, the dimanganese RNR could present a useful new target for antibacterial design, he added.