Pigments, polymers, and reflective spheres help keep you safe on the road 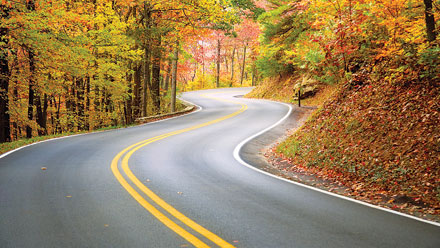 Of all the standard driving safety devices—seat belts, air bags, antilock brakes—one thing that many of us likely take for granted is the road markings that help keep cars away from other vehicles on the straight and narrow as well as the curvy and treacherous.

There are three classes of road-marking coatings, all of which use similar pigments. White markings typically contain titanium dioxide. Yellow lane lines were historically colored with lead chromate, but the pigment has been phased out for toxicity reasons. A big challenge for manufacturers of road-marking material has been to develop pigments that effectively mimic lead chromate’s color and stability to withstand high-temperature application methods and daily exposure to UV light, says Fred Gelfant, vice president of research and development at Epoplex. As such, firms in the road-marking industry don’t divulge their formulas for yellow paint, except to say that the color comes from organic molecules.

The pigment needs to be applied to the road by means of a quick-drying, liquid medium that must go on as thinly as possible—typically less than 1 mm thick—while also being long-lasting. On the least durable end is latex paint, which lasts only a year or two. Akin to latex paint used for building exteriors, road paint contains pigment, a polymer resin—often an acrylic—and water for the solvent. As the water evaporates, the paint dries and the polymer coalesces.

A second class of road markings is the so-called plural-component materials, which start out separately as a polymer resin and a catalyst; one popular combination is an epoxy and an amine. To apply plural-component markings, the materials must be heated to about 40 to 60 ºC, mixed to start cross-linking, and sprayed onto the road. As the material hits the surface, cross-linking proceeds and the material hardens in 15 to 30 minutes.

Another plural-component combination is polyureas, which mix an amine resin with an isocyanate catalyst. Polyureas cure very quickly—within two to three minutes—and they last about four years. But the downside is that a clean road, which is required for laying down all pavement markings, is particularly important for ureas, says Jerry Britt, technical services manager at Ennis Traffic Safety Solutions.

A third main class of road markings is the thermoplastics, which were originally developed during World War II as a way to circumvent solvent shortages, Britt says. Thermoplastic resins are typically based on modified esters from gum or tall-oil rosins or aliphatic C5 synthetic hydrocarbons. Thermoplastics must be heated to upward of 200 ºC for road application and can be sprayed on pavement or extruded as a ribbon. They solidify almost instantaneously and traffic disruptions are minimal. Applied 1 mm thick, thermoplastic markings last about three years. Applied up to 3 mm thick, they take longer to dry but last for five years.

In addition to spraying or extruding coatings, preformed thermoplastic or polymer tapes can be used for lane lines, crosswalks, or markings such as turn-lane arrows. Thermoplastic tapes are heated with a propane torch to get the tape to melt and fuse with the road, while polymer tapes have a pressure-sensitive adhesive. Some tapes are designed to be temporary but others can last as long as five or more years.

In and of themselves, none of the paint, plural-component, or thermoplastic road markings will shine brightly in a car’s headlights at night. Reflectivity—or, technically, retroreflectivity, which involves reflecting light back close to the source with little scattering—is achieved by dropping glass spheres onto road markings after the markings are applied but before they dry. The spheres are made of sodium silicate glass and typically have diameters between 180 and 850 µm. In the case of thick thermoplastics, spheres are also mixed into the material so that as the coating wears down over several years, new spheres are exposed.

The so-called rainy night problem, when road markings are most difficult to see, presents an additional challenge for road-marking developers. One solution is to apply thermoplastics as bumpy rather than smooth lines, so drivers notice a noise or vibration if they stray out of their lane. A step beyond bumps is to add to the coating little spikes that stick up above water on the road to better reflect headlights. 3M, which also makes road-marking tapes, has developed a new type of reflective element that reflects under water, Entrekin says.

Which materials get used on which roads depends on several factors: weather, traffic volume, impact of shutting down the road, when a road might be resurfaced, and whether snowplows are likely to scrape off a thick coating. A durable but slow-setting epoxy could be attractive for coating 100 miles of highway in Montana but impractical for a busy Los Angeles freeway, for example. It also wouldn’t make sense to pay for an expensive, long-lasting thermoplastic if it will just be decimated by a snowplow or if the road will be resurfaced within a year or two. These are just some of the many considerations evaluated for markings that most drivers simply pass right by.

Materials
What’s in a bowling ball, and how does its chemistry help topple pins?
Environment
Designing Greener Chemicals Award: Sherwin-Williams Co.
Materials
What's that stuff? Fix-A-flat
Share X
To send an e-mail to multiple recipients, separate e-mail addresses with a comma, semicolon, or both.
Title: What's that stuff? Road Markings
Author: Jyllian N. Kemsley
Chemical & Engineering News will not share your email address with any other person or company.

Comments
Daniel (May 29, 2013 9:19 AM)
Very helpful article, pls can i get more info on how to prepare a low cost road marking paint that can be applied on roads in Africa.
Reply »

GG (August 25, 2013 4:24 PM)
Hi, I live in Bend, Oregon and the thermo they put down for crosswalks is a complete hazard. The city puts layer over layer of this thermo tape down TWICE a year! You can latterly see trucks and trailers bounce over them at every miserable intersection! The stuff is so thick after overlapping layer after layer to patch in areas worn off by studded snow tires and normal traffic flow that it actually casts a shadow at night!! Do you know of any laws or regulations regarding the application of this stuff? I have never in my life saw it like this except here in Bend!
Reply »

james theophil (January 15, 2014 1:29 AM)
is there any road marking paints which reflect in the dark when the vehicle headlights fall on them

Chiye (September 21, 2015 2:34 AM)
Just add the glass beads into the paint. The glass beads will reflect when the vehicle headlights fall on them in the dark.
Reply »

brendan (July 22, 2014 7:05 AM)
How can the applied thickness be measured, particularly on non-asphalt roads that have a 'rough' surface?
Reply »

julius mosenyegi (October 25, 2014 2:32 AM)
hi I live at Klerksdorp , were I am working we have a problem of road marking paint , is like we paint this and next year that paint is vanished , and we only mix it with thinners only . please give us a solution.
Reply »

Joel (November 2, 2015 1:19 PM)
I hadn't considered the road line markings as a safety device before, but it totally makes sense. I remember when I was first learning to drive I was terrified of oncoming traffic. It took a while to trust the road lines, but they've never failed me before. Thanks for the point.
Reply »