Proud Pooch:
[+]Enlarge
Credit: Park Spark Project
Dog does his duty to light up the park. 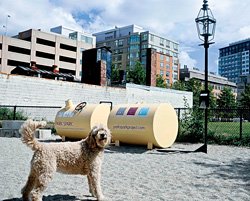 Credit: Park Spark Project
Dog does his duty to light up the park.

Matthew Mazzotta was sitting in a dog park in Cambridge, Mass., one day when inspiration struck. Watching a friend walk his dog, Mazzotta, a conceptual artist, real­ized that there was a lot of natural DOG-PRODUCED FUEL in the park—and that it was literally going to waste.

So he obtained a grant from his alma mater, Massachusetts Institute of Technology, to start the Park Spark Project and build a methane digester for the dog-park poop. Digesters use organic material and anaerobic bacteria to produce methane, which can then be burned to generate energy.

Mazzotta built the prototype digester, now located in Cambridge’s Pacific Street Dog Park, himself and “paid a guy to weld it up,” he says. It has to be airtight because of the anaerobic microbes at work inside, he explains. “This thing is great,” he says, because the by-product of reducing the harmful methane emissions is free energy.

Currently, dog owners can clean up after their pooches with biodegradable bags provided in the park, toss the waste into the digester, and stir up the contents with a crank wheel on the outside of its tanks. The assembly is hooked up to an old-time lamppost, which can be lit with the methane produced. “I wanted to do something relevant to the neighborhood,” Mazzotta tells Newscripts. “The lamppost was a natural extension—parks need light.” 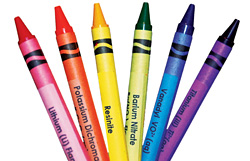 Another inspired science-based creation that has recently come to Newscripts’ attention is CHEMICALLY LABELED CRAYONS, for sale in the online marketplace Etsy. When children are coloring with these crayons, the website says, “they are exposed to the names of chemicals that will make those colors!” For instance, a cerulean blue crayon in the pack is labeled “CuSO4 (aq).”

Charlene Sabin, the crafty chemical educator who developed the labels for the Crayolas, says she came up with the idea while tutoring a student for the College-Level Examination Program (CLEP) chemistry test. A multiple-choice practice question asked which chemical would be blue in solution, Sabin says. “I commented that I wished my crayons as a child had been usefully named so that I would be able to do problems like this” easily, she tells Newscripts.

Sabin then took it upon herself to affix color-associated chemical labels to all 120 Crayola crayons and now sells them under her screen name, QueInteresante. “Some of them are solutions, others are solids, and some are minerals or precious stones,” she says, “because I was running out of other options for all the red-colored crayons.”

The authors of a recent paper in the Journal of Proteome Research drew inspiration for their work from a series of French comics, “Les Maîtres de l’Orge” (“The Masters of Barley”), about the history of a family of beer brewers (DOI: 10.1021/pr100551n). “It was this superb saga that fired our fancy to dig deep into the BEER PROTEOME,” the authors write.

Pier Giorgio Righetti of Polytechnic University of Milan and coworkers used combinatorial peptide ligand library (CPLL) technology and mass spectrometry to identify low-abundance proteins in samples of Italian beer. In contrast with prior studies, which uncovered only seven to 12 protein species, this study found 20 different barley proteins as well as more than 40 proteins from yeast species such as Saccharomyces cerevisiae.

With the CPLL technology, the authors write, “it is hard to say when one could … scrape the bottom of our barrel!”