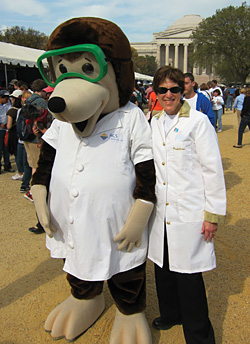 Credit: Rudy Baum/C&EN
ACS's mole mascot and Jacobs take in a sunny afternoon at the festival.

The first USA Science & Engineering Festival took place last month, and judging from attendance at the array of events and the surprised, curious, and happy expressions of youngsters who participated, it was a rousing success. The festival was designed to be a new model for engaging students, teachers, parents, and the general public by bringing attention to how science and engineering intersect with our daily lives (www.usasciencefestival.org).

[+]Enlarge
Credit: Steve Ritter/C&EN
A young girl listens to instructions on how to see the beating heart of a zebrafish embryo at the Societyfor Developmental Biology’s booth. 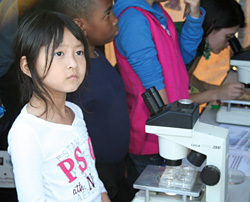 Credit: Steve Ritter/C&EN
A young girl listens to instructions on how to see the beating heart of a zebrafish embryo at the Societyfor Developmental Biology’s booth.
[+]Enlarge
Credit: Rudy Baum/C&EN
A girl explores 3-D geometry at the AmericanMathematical Society’s booth. 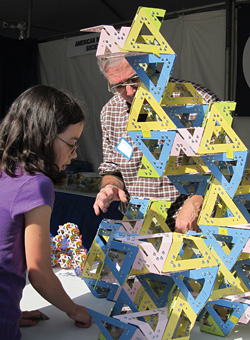 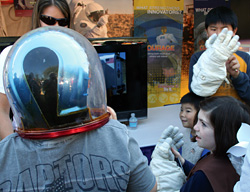 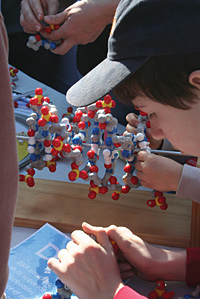 Credit: Steve Ritter/C&EN
Festival-goers join in to build a model of DNA at the American Society for Biochemistry &amp; Molecular Biology's exhibit.

The festival was the brainchild of biochemist-entrepreneur Larry Bock, who over the years has helped launch 40 high-tech and life sciences technology companies. Bock was inspired by science festivals he has attended in Europe and Asia.

“Those events are more like music, art, or literary festivals than they are science fairs—celebrations of science and engineering,” Bock explained in an interview. Noticing that the U.S. had no equivalent, Bock created a regional festival in San Diego in 2009. It was so successful that he decided to take it to the national level. “Everything is meant to be hands-on, interactive, fun, and entertaining,” Bock said.

“Science and engineering levels the playing field for students, regardless of where they live and whatever their ethnicity or economic situation,” said Gloria Allen, a science teacher at Washington’s Mary H. Plummer Elementary School. Allen, who was at the preview event, received a Presidential Award for Excellence in Mathematics & Science Teaching in 1997. “When children are encouraged to explore, discover, ask questions, and put all the pieces together, that is what lays the foundation for the future. Classroom teachers can’t do it alone. We need partners to help. This festival does that in the broadest sense.”

Hosted by defense contractor Lockheed Martin, the festival kicked off on Oct. 10 at the University of Maryland with a concert called the “Powers of Ten: A Journey in Song from Quark to Cosmos.” Held on the date 10/10/10, the Powers of Ten event featured a set of science-related songs by British composer David Haines that was performed by more than 250 children and adults.

The festival concluded with an expo on the National Mall and along Pennsylvania Avenue in downtown Washington on Oct. 23–24—an event dubbed “a giant science party on America’s front lawn.” The expo featured some 1,500 interactive exhibits, student competitions, and 75 science-themed stage shows performed by musicians, comedians, and dancers. Satellite events took place at more than 50 other locations in 20 states. Even President Barack Obama got in on the act by hosting a White House science fair featuring award-winning science students (C&EN, Oct. 25, page 8).

At the expo, the Amazing Nano Brothers performed their comedic juggling show that takes the audience inside atoms and demonstrates the quirks of nanoscale forces. Television’s Mythbusters, Meteorite Men, and Bill Nye the Science Guy were in attendance, and Joe Palca of National Public Radio conducted live one-on-one interviews with famous scientists, including 2003 Chemistry Nobel Laureate Peter C. Agre.

Pharmaceutical company Johnson & Johnson featured its YourHealth 3.0, a new virtual life sciences center where visitors can explore the past, present, and future of medicine and the research and development that goes into discovering new ways to treat diseases. Zach Powers, the ScienceRapper, performed “Wicked Rhymes” about science and math. And passers-by could interact with famous scientists such as Thomas Edison, Marie Curie, and Benjamin Banneker, played by actors, as well as the Cat in the Hat starring in his own science show.

One of the competitions was a Rubik’s Cube tournament. The colorful 3-D puzzle, one of the most popular toys in the world, is widely used in schools to help teach fractions, ratios, algebra, and geometry, as well as perseverance. Schools from states in the Washington region put together teams of eight students that competed to see which team could be the first to solve 25 Rubik’s Cubes—some students solved the puzzle in as little as 30 seconds.

Additional competitions included the Kavli Science Video contest, in which students prepared a short video focusing on a scientific concept or a particular impact of a scientific discovery to explain “why science is cool.” Another video competition, sponsored by Dassault Systèmes and Engineering.com, challenged teachers to use multimedia tools to teach a complex concept.

Other marquee events held during the festival included “Lunch with a Nobel Laureate,” in which Nobel Prize winners fanned out and shared a brown bag lunch with some 6,000 middle and high school students. And as part of the “Nifty Fifty,” more than 50 selected U.S. scientists and engineers visited schools to speak about the area of science or engineering they are passionate about, their own career path with its rewards and stumbling blocks, and where they envision that opportunities will be for young people in science and engineering.

“Most kids asked to name a famous scientist might say Albert Einstein,” Bock told C&EN. “Ask them to name a living famous scientist, and they are a little dumbfounded. We want to humanize these leading figures of science and engineering.”

The American Chemical Society was one of more than 550 companies, federal agencies, schools, and nonprofit organizations that participated in the festival; C&EN, which is published by ACS, was a festival media partner.

ACS staff, Chemical Society of Washington local section members, and student volunteers from local universities manned three expo booths. One activity involved helping young students make and take home some “flubber,” a playful putty made from glue containing polyvinyl acetate that is cross-linked by boron atoms from a solution of borax detergent. Other activities included learning how ink is printed on paper and discovering the mystery of the sun’s ultraviolet radiation. ACS also partnered with a coalition of scientific societies to host the “Evolution Thought Trail,” a series of expo booths from different disciplines that students could check off on a list as they visited to receive prizes and classroom credit.

The first day of the expo was also Mole Day, from 6:02 AM to 6:02 PM on 10/23, in which chemists annually celebrate Avogadro’s number, 6.02 × 1023, which is the number of atoms, molecules, or other species in one mole of a substance. ACS’s mole mascot was on hand and mobbed by eager children. Most of the youngsters didn’t know the chemical significance of the goggle-wearing rodent, ACS Division of Education Director Mary Kirchhoff said. “It was a great teaching opportunity.”

ACS Executive Director and CEO Madeleine Jacobs said the festival’s timing was perfect to coincide with ACS’s National Chemistry Week (Oct. 17–23), and it will help launch 2011, the International Year of Chemistry. “This festival is a model with a message that rings true anywhere in the country,” Jacobs added. “We need to connect our science with the public, and we need to do it in a way that conveys the thrill of discovery and the sense of pride in making the world a better place.” 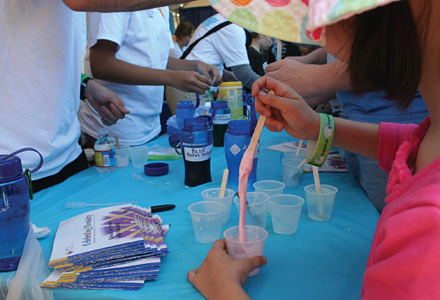 Education
New international students cannot enter US for online-only programs
Education
Chemistry-style fun and games
Undergraduate Education
Block plan compresses one class into a few weeks for deeper learning
Share X
To send an e-mail to multiple recipients, separate e-mail addresses with a comma, semicolon, or both.
Title: Celebrating Science And Engineering
Author: Stephen K. Ritter
Chemical & Engineering News will not share your email address with any other person or company.