After sitting interminably in magnesium’s shadow, the alkaline-earth metal’s chemistry is coming alive 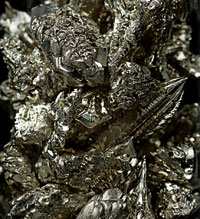 For more than a century, magnesium has been prized as a reactive metal capable of facilitating a range of important organic syntheses—the Grignard reaction, for example. For calcium, which sits just below magnesium in the periodic table, there has been no such fame. But that is beginning to change.

After French chemist Victor Grignard’s breakthrough organomagnesium discovery, for which he was awarded the 1912 Nobel Prize in Chemistry, chemists tried to make calcium-based Grignard analogs, notes  Sjoerd Harder of the University of Groningen, in the Netherlands. When the successes didn’t come, calcium chemistry slipped into dormancy as a consequence of the low reactivity of the metal and the too-high reactivity of organocalcium compounds, Harder says. The assumption chemists often made that calcium chemistry is the same as magnesium chemistry fell apart.

Through their new discoveries, Harder and a handful of calcium specialists are now getting the word out that the stability and reactivity of organocalcium compounds can be controlled and optimized through judicious molecular design. These developments have opened the curtains and let the sun shine on calcium chemistry.

“After 100 years of waiting, calcium chemistry is now definitely moving—like Sleeping Beauty, it has been kissed and awakened,” Harder says.

“Calcium is offering new possibilities in catalysis,” Harder explains, and it’s helping to fulfill the quest of organometallic chemists to use “cheap metals for noble-metal tasks,” referring to reactions catalyzed by rhodium, palladium, and platinum.

The success of the Grignard reaction was a tough act for calcium to follow. In this addition reaction, alkyl or aryl magnesium halides, known as Grignard reagents, behave as nucleophiles and attack electrophilic carbon atoms, resulting in formation of a new C–C bond. The carbon atom in a carbonyl group is a common target—for example, turning a ketone into an alcohol.

Calcium Grignard reagents have been reported here and there in the literature since 1905, Harder says, but all the examples were later shown to be misidentified or were never thoroughly characterized. It wasn’t until 2006 that Matthias Westerhausen and coworkers of Friedrich Schiller University in Jena, Germany, first showed structural evidence for a true calcium Grignard reagent. 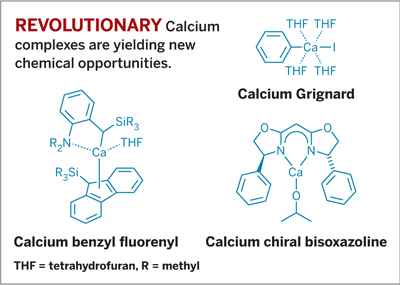 Calcium is significantly more electropositive than magnesium, which means it should be more reactive. But it’s still a little sluggish, Westerhausen points out. On the other hand, because calcium forms longer, weaker bonds to carbon, organocalcium complexes display a much higher reactivity than organomagnesium complexes. The greater ionic character of the Ca–C bond also means organocalcium complexes are less soluble in organic solvents than the magnesium versions.

To kick-start calcium, it must be activated, which Westerhausen’s group does by dissolving calcium metal in liquid ammonia and then quickly removing the ammonia to leave highly reactive calcium powder. Adding an iodoaryl compound at low temperature in tetrahydrofuran solvent produces a Grignard reagent: an aryl calcium iodide.

Alkyl calcium Grignards are so reactive that they can be handled only under strict exclusion of air and moisture, Wester­hausen notes. The aryl versions can be isolated in crystalline form, but in solution they are so reactive that even at freezing temperatures they react with the ether solvent. Thus, it’s unclear how useful calcium Grignards might ever be as reagents for organic synthesis, he says.

Although calcium Grignards haven’t yet lived up to expectations, they have given chemists information about how to handle organocalcium compounds, insight that is now leading to dividends in catalysis. For example, several research groups showed by the early 1990s that using multiple trialkylsilyl substituents improves organocalcium solubility while helping shield the reactive Ca–C bond. But this trick reduces the calcium complexes’ reactivity and scope for application too much, Harder says.

“A combination of silyl substitution and intramolecular calcium coordination turns out to be the key to tune reactivity,” Harder explains. In 1998, his group used this approach to synthesize benzylcalcium complexes as the first organocalcium catalysts. His team is still learning how calcium catalysts operate and is drawing insight from transition-metal and lanthanide catalysts to design new calcium catalysts.

Transition-metal complexes have dominated catalysis because d orbitals allow fast, reversible switching of metal oxidation states, which is a prerequisite for many catalytic cycles, Harder says. “But do we really need d orbitals?” he asks.

Some of the most active catalysts are based on early transition metals such as titanium and zirconium, which form complexes with d0 electron configurations, he notes. The catalytic activity in these cases is a function of Lewis acidity and steric effects rather than redox processes, Harder says.

Understanding these reactivity differences has led chemists to breakthroughs in lanthanide-metal-catalyzed reactions in which d orbitals aren’t involved, Harder points out. And recognizing that calcium has a d0 electron configuration similar to lanthanides has provided the key to applications in calcium catalysis.

For example, one of Harder’s calcium complexes that incorporates one benzyl ligand and one fluorenyl ligand is an effective living, stereoselective catalyst for making polystyrene.

Harder’s group also developed what turns out to be the first early-main-group metal catalysts for alkene hydrosilylation, which involves addition of a Si–H bond across a C=C bond. “Catalytic hydrosilylations are one of the keys to making silicones, and they are very much the domain of transition-metal chemistry,” Harder says.

The usual metals used to catalyze hydrosilylations—such as rhodium, palladium, and platinum—are found in the expensive section of the periodic table, he adds. Although these metals are highly reactive catalysts, they have modest regioselectivity and can lead to unwanted side reactions such as alkene isomerization and double-bond hydrogenation.

With a dibenzylcalcium complex con­taining trimethylsilyl and dimethyl­amino groups, Harder’s team coupled phenyl­silane with alkenes to form silylated products in essentially 100% yield at room temperature. These reactions not only are very fast, Harder says, but the solvent choice can give complete control over regioselectivity. This property is unique in hydrosilylation catalysis, he notes.

“Given the lability of the alkaline earths, this isn’t as easy as it sounds,” Hill adds. Hill’s team, guided by Hunt’s theoretical investigations, found that adding fused polyaromatic rings to the diketiminate framework adds stability to the calcium complexes to optimize catalytic activity.

In one application, the researchers used these catalysts for hydroaminations in which an N–H bond of a substrate adds across a double bond to form an amine derivative. For example, in intramolecular versions, they convert aminoalkenes to pyrrolidine and piperidine ring compounds. And in intermolecular versions, they add amines to alkenes, such as benzylamine to styrene, to form new amine compounds. Hill’s group has also extended the chemistry to hydrophosphinations to add P–H bonds of phosphines across double bonds to make diphenylphosphine derivatives.

On the basis of their studies, Hill and Hunt suggest that the catalytic activity of calcium and the heavier alkaline-earth metals should not be viewed as simply “lanthanide mimetic.” The alkaline-earth metals’ larger variations in size, electropositive character, and charge-to-size ratios may afford an even greater scope for tuning reactivity within reactions than lanthanides can achieve, they note.

On another calcium catalyst front, Shu¯ Kobayashi of the University of Tokyo and coworkers discovered that teaming up bulky calcium alkoxides with chiral bisoxazoline ligands produces efficient chiral catalysts for asymmetric addition reactions.

During its investigations, Kobayashi’s team discovered that by substituting a different type of ester—crotonate derivatives—the reaction follows a [3 + 2] cycloaddition pathway instead, leading to pyrrolidine compounds with contiguous stereogenic tertiary and quaternary carbon centers.

“It is remarkable that small differences in substrate structure affect the reaction course and change the product structure so dramatically,” Kobayashi says.

The glutamic acid derivatives and pyrrolidines are important intermediates in drug development, he adds. For example, the researchers used the [3 + 2] cycloaddition to make optically active pyrrolidine cores of hepatitis C virus polymerase inhibitors, which are potential antiviral drugs, Kobayashi says.

The Tokyo chemists have also used the calcium catalysts to make 1,4-addition products starting with azlactone ring compounds and to carry out asymmetric Mannich addition reactions of 1,3-dicarbonyl compounds such as malonates with nitro compounds or imines to form chiral nitro- or amine-containing carbonyl compounds.

“Calcium’s use in custom organic synthesis is quite important from economic and environmental points of view,” Kobayashi says. Calcium is abundant and cheap, and the bisoxazoline ligands can be prepared from readily available natural chiral amino acids, he notes.

Calcium chemistry has grown tremendously in the past decade, Harder says. Even so, no one is yet using organocalcium catalysts in industrial processes, he notes. But because this discipline is still young, commercial applications are just a matter of time, he believes.

And because most researchers exploring calcium are looking at strontium and barium analogs, those elements could stir up unique catalytic activity as well. In addition, despite the differences in reactivity, “calcium and magnesium chemistry are interlocked, and so the new interest in calcium chemistry is doubling back to revolutionize magnesium chemistry again,” Harder says.