Mercury Is Out At NIST 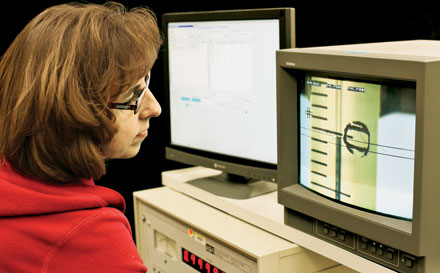 One of the original activities of the National Institute of Standards & Technology is now history. As of March 1, NIST no longer provides calibration services for mercury thermometers.

The move marks the end of an era; the organization had been performing this service since it opened as the National Bureau of Standards in 1901. NIST says that closing its program is part of a larger government effort—in collaboration with the Environmental Protection Agency, standards-setting organizations, and other groups—to phase out use of mercury thermometers altogether because of the element’s toxicity.

Eliminating the program “is something that has been in the works for five or six years,” says Gregory F. Strouse, the acting division chief of the Temperature, Pressure & Flow Metrology Division at NIST. “It’s the result of a number of things coming together, and we thought we could set a good example for other government agencies by stopping this service” of calibrating mercury thermometers.

“Last year we changed about 250 of the standards,” Strouse says. “We have done the easy ones and are down to dealing with the hard ones now.”

Some of the hard-to-change standards are in the petroleum industry, which is the last major industry sector still using mercury thermometers. “It’s a combination of two things—regulatory standards that they have to follow and the fact that they are just used to using mercury,” Strouse says.

One standard that’s making it hard for the petroleum industry to move away from mercury thermometers is the standard for flash point measurement. Strouse says NIST is going to industry facilities where flash points are measured and showing alternative thermometers that can be used to meet that standard.

For its part, the petroleum industry is working to make adjustments to a mercury-free environment. At the American Petroleum Institute, the trade association representing the oil industry, the change is under way. “An API task group with representatives from EPA and the industry is now developing a testing protocol for alternative devices with the objective of finding technology that is durable and accurate in field settings,” Bill Bush, an API spokesman, says.

The situation is different at scientific and research labs. “Most of the scientific fields switched over to digital or electronic thermometers a decade ago,” Strouse says, because in terms of accuracy, mercury thermometers “are at the bottom of the heap.” The most accurate device, he says, is the standard platinum resistance thermometer, which determines temperature by measuring the resistance changes in pure platinum.

Over the past three years, as it moved to eliminate calibration of mercury thermometers, NIST has recovered and recycled more than 8,000 mercury thermometers stored in its own cupboards and drawers. NIST reports it has sent the mercury from the thermometers to specialized recycling centers that repurpose the metal to produce compact fluorescent light bulbs.

“The amount of mercury in a compact fluorescent light bulb is about 1 to 4 mg,” says Strouse. Each recycled NIST thermometer contained about 500 mg of mercury, potentially providing the mercury for more than 125 bulbs.

Pollution
Satellites can now see air pollution inequality within cities
Persistent Pollutants
Goodbye to some PFAS in food packaging
Pollution
Mercury makes it deep into marine trenches
Share X
To send an e-mail to multiple recipients, separate e-mail addresses with a comma, semicolon, or both.
Title: Mercury Is Out At NIST
Author: David J. Hanson
Chemical & Engineering News will not share your email address with any other person or company.