As if it weren’t enough to win the 2011 Academy Award for Best Actress for her portrayal of a ballerina coming unhinged in “Black Swan,” Natalie Portman is apparently also blessed with SCIENCE SMARTS. A 1998 Journal of Chemical Education paper recently came across the Newscripts desk that the 29-year-old actress—then Natalie Hershlag, a high school student in Syosset, N.Y.—coauthored (DOI: 10.1021/ed075p1270).

The article, “A Simple Method To Demonstrate the Enzymatic Production of Hydrogen from Sugar,” was the result of an independent-study project carried out by Portman during her sophomore year at Syosset High School. Intended to illustrate “environmentally friendly biotechnology for the utilization of renewable energy sources,” the work earned Portman a semifinalist position that year in the prestigious Intel Science Talent Search, an annual competition organized by the Society for Science & the Public.

The laboratory instructions Portman helped develop aim to teach high schoolers and undergraduates the principles of enzyme-catalyzed reactions by instructing them how to break down cellulose with a combination of cellulase, glucose dehydrogenase, and hydrogenase. The amount of hydrogen evolved in the process is indicated by a simple redox dye, benzyl viologen.

“Natalie was an excellent student with an excellent work ethic,” says Jonathan Woodward, Portman’s coauthor and adviser at the time. He was then at Oak Ridge National Laboratory and now teaches high school chemistry in Knoxville. “I am certain she would have excelled in chemistry had her career taken that path.”

Stephen H. Stoldt of Painesville, Ohio, wrote to  Newscripts to point out another connection between chemistry and the entertainment biz. 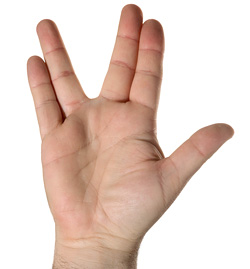 A recent C&EN Science & Technology Concentrate titled “Sad Tears Carry Chemical Signals” describes a study in which men experienced a drop in sexual arousal and testosterone levels when asked to sniff vials containing WOMEN'S TEARS (C&EN, Jan. 10, page 30). This article “brought to mind the old ‘Star Trek’ episode ‘Elaan of Troyius,’ in which an alien princess caused Captain Kirk to fall in love with her by means of physical contact with her tears,” says Stoldt, a Trekkie and 50-year American Chemical Society member. “I guess Gene Roddenberry was really ahead of his time,” Stoldt says of the “Star Trek” creator.

Perhaps Hollywood types like Portman, with their heads glued to their cell phones constantly checking in with their agents, function on a higher level because of their long-term exposure to radio-frequency-modulated electromagnetic fields (RF-EMFs). A recent article in the Journal of the American Medical Association reported that these fields, emitted by cell phones, increase BRAIN GLUCOSE METABOLISM in the region of a person’s brain that is closest to the phone’s antenna (DOI: 10.1001/jama.2011.201).

The research team, led by National Institute on Drug Abuse Director Nora D. Volkow, used positron emission tomography to study the brains of 47 healthy patients after 50 minutes of sitting with a cell phone turned on next to their ears and after 50 minutes with the phone turned off. To measure brain glucose metabolism, the scientists injected patients with a radioactive sugar,  [18F]fluorodeoxyglucose, and monitored its signal change over time.

Although the researchers did not see a whole-brain metabolism difference between “on” and “off” cell phone conditions, they did find statistically higher metabolism near the antenna in the orbitofrontal cortex and temporal pole of the brain.

“We cannot determine the clinical significance” of the results, says Gene-Jack Wang, chair of the medical department at Brookhaven National Laboratory and coauthor of the study, but it’s clear that “the human brain is sensitive to the effects of RF-EMFs.” Further experiments are needed to assess whether the cell phone effects are harmful or not, he tells Newscripts.